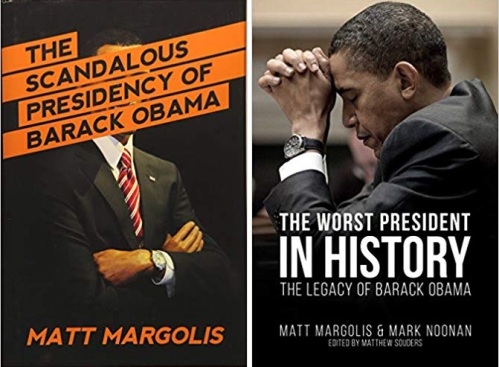 Excerpts from Six Reasons Why Barack Obama Is the Worst President in History By Matt Margolis – July 26, 2018

Weaponizing the government against his enemies

Over a two-year period leading up to the 2012 election, tea party and other conservative groups were improperly scrutinized by the IRS. The IRS also targeted GOP candidates, Romney donors, and private individuals critical of Obama.

Conservative author Dinesh D’Souza was indicted for campaign finance violations for a crime typically not prosecuted at all.

James O’Keefe of Project Veritas was put on a terrorism watchlist after a video was released of him dressed as a terrorist crossing back and forth over the U.S./Mexico border to demonstrate the lack of border security.

According to the ACLU, there was a 64 percent growth in electronic spying by the United States government during Obama’s first term.

In May 2017, we also found out that Obama’s National Security Agency had been conducting illegal searches on Americans for years and was rebuked by the Foreign Intelligence Surveillance Court (FISC). We didn’t hear about it sooner because the Obama administration covered it up.

As a candidate in 2007, Obama promised he would close the terrorist detention facility at Guantánamo Bay, Cuba (Gitmo), as soon as he was elected.

He signed an executive order on January 22, 2009, requiring Gitmo to close within one year.

Congress refused to go along, so instead of closing it, he systematically purged the prison of its terrorist inmates, as a sort of end-run around congressional opposition to closure. In 2003, there were 680 prisoners. By early January 2015, there were fewer than 130, and he continued releasing prisoners through the remainder of his second term.

One retired CIA officer estimated that at least 50 percent of those released from Gitmo returned to battle against American troops, and Paul Lewis, Obama’s special envoy for Guantanamo closure, confirmed that Americans have been killed by released Gitmo detainees.

Despite his campaign promise to bring Democrats and Republicans together to reform healthcare, Obama signed a trillion-dollar government takeover of one-sixth of the United States economy with zero Republican votes in the Senate and only one Republican vote in the House.

Despite a promise of transparency, Obama and then-House Speaker Nancy Pelosi made sure that the final negotiations were held behind closed doors.

There was evidence that the Obama administration fudged enrollment numbers to make it appear more successful and popular than it really was.

Before Obama, all jobs lost in post-World War II recessions were recovered after about twenty-five months (on average). Under Obama, it took seventy-seven months for employment to return to pre-recession levels, making Obama’s recovery the slowest recovery of them all—and by a wide margin.

Obama is also the only president in U.S. history to have never had a single year of 3.0 percent or greater GDP growth.

The largest deficits in history

When adjusted for inflation, Obama owns the seven highest deficits in history—surpassing the deficits incurred during World War II. Obama’s smallest deficit was still higher than the last deficit before he took office.

While many try to argue that 2009’s spending should not count towards Obama’s spending record, 2009 was not actually constrained by the budget approved by President Bush. In fact, only three of FY2009’s 12 appropriations bills passed under Bush because the Democrats in Congress waited until Obama took office before going on a spending binge.

There is a lot more of this in my book. But the truth doesn’t mean much unless people become aware of it. Liberals desperately want Obama to be remembered as a great president despite his horrible record. Don’t let them succeed.

Matt Margolis is the author of the book, The Scandalous Presidency of Barack Obama and the bestselling book The Worst President in History: The Legacy of Barack Obama. You can follow Matt on Twitter @MattMargolis

3 responses to “The Worst President”