Some happy news on the eve of Christmas Eve.

At the official lighting of the National Christmas Tree this year, Trump offered an overtly religious message, noting that “for Christians, this is a holy season.” He added that the “Christmas story begins 2000 years ago with a mother, a father, their baby son, and the most extraordinary gift of all, the gift of God’s love for all of humanity.”

Oklahoma mailman clips mailbox, falls out, gets run over

That day Hallie was one of many customers who noticed an old man in need of some help. “His shoes were being held together with duct tape,” the teenager recalled to WBKO.

Another diner noticed the man too, and Hallie says she watched as he looked in him the eye, took off his boots and handed them to him. The good Samaritan, who was later identified as Mark Townsend of Scottsville, ate the rest of his meal wearing just his socks, then walked barefoot out into the cold.

My granddaughter said, ‘Pa, why did you do that?’ And I said, ‘because God spoke to me, and said to give him my shoes,'” Townsend later recalled to WBKO. 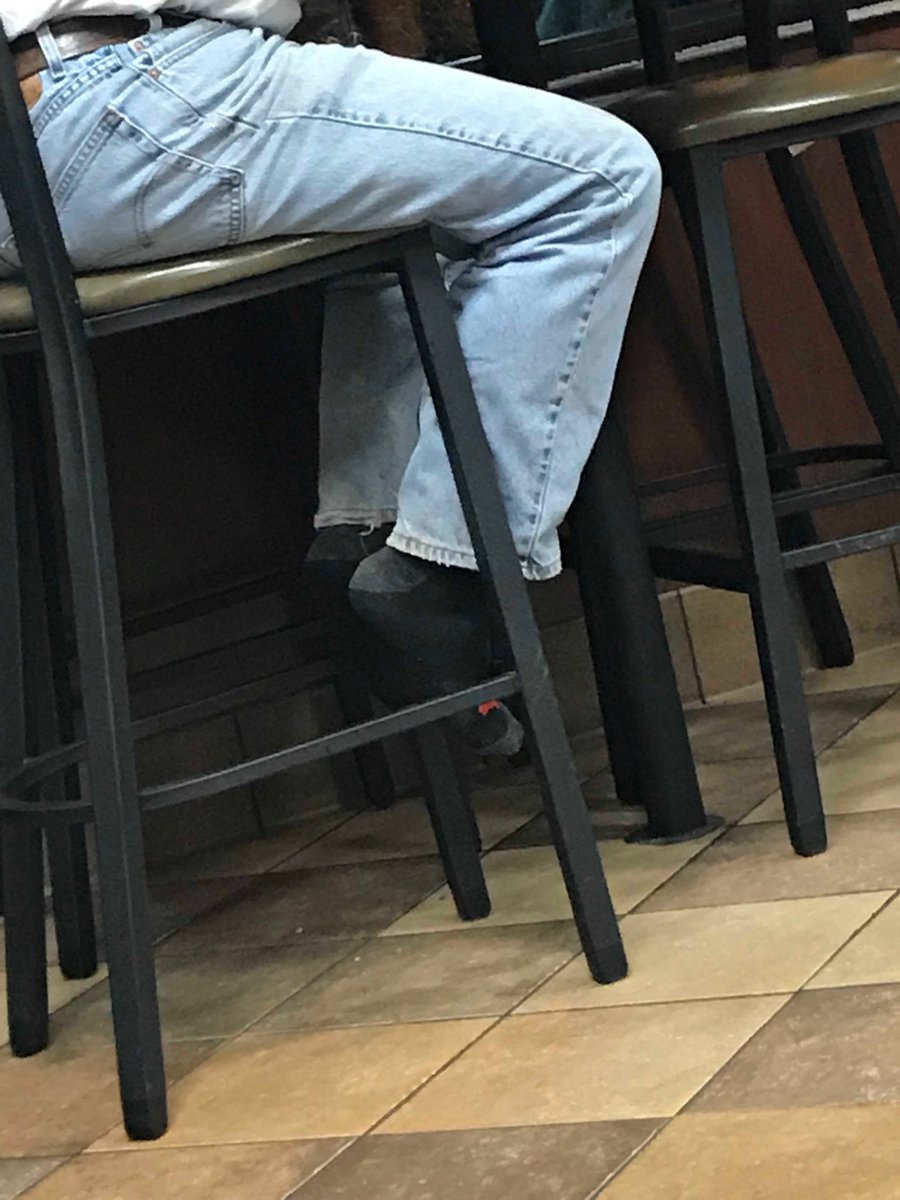 He continued: “God said, I’ll supply your needs, and that’s all that matters. I don’t worry about nothing. I have a roof over my head, shoes on my feet.”

‘I’m glad we were able to give back’: Nonprofit surprises 12 military families at Fort Bragg by paying off $2,000 worth of layaway balances in time for Christmas

•A national nonprofit organization paid off $2,000 in layaway balances for 12 Fort Bragg military families
•Pay Away the Layaway plans to pay off $10,000 in layaway balances for military families nationwide
•The families were called to the South Post Exchange under the guise of a customer appreciation exchange Tuesday
•The twelve families were selected based on the balance and items, with a focus on families that had put clothing and toys on layaway

There was dancing in the streets of Brooklyn on Wednesday as President Donald Trump commuted the sentence of Rabbi Sholom Rubashkin, a former supplier of kosher meat who was sentenced to an unusually long prison term of 27 years in 2010 after being convicted of fraud the year before.

Rubashkin’s slaughterhouse and meat-packing plant in Iowa was raided by Immigration and Customs Enforcement (ICE) in 2008, who found illegal aliens working there. Later, he was arrested on various fraud charges. Though the charges relating to hiring illegal aliens were later dropped, he was convicted of the fraud charges. The judge, Linda Reade, handed down an unusually long sentence that critics suspected had been motivated by antisemitism. Critics pressed President Barack Obama for clemency, without success.

CRITICS PRESSED OBAMA FOR CLEMECY WITHOUT SUCCESS? FOR A JEW? BE SERIOUS.

I saw this on Yahoo and the comments were absolutely vile. Yes, he used illegals, the same as hundreds of other companies. But he served nine years. How many companies are even fined?

[CtH: Not the ones who donate to Democrats, you can be sure of that.  Not in New Yuck City.]

The billionaire who is saving Bethlehem

Samer Khoury is not a diplomat, which makes his self-assigned mission of restoring the little town of Bethlehem that much harder.

Despite incredible odds against increasing violent protests in the wake of U.S. President Donald Trump’s decision to recognize Jerusalem as Israel’s capital, this businessman has been able to attract the support from heavyweight patrons of all faiths, including Theodore McCarrick, the archbishop emeritus of Washington, D.C.; Prince Talal Bin Abdulaziz Al Saud, a senior member of the royal family of Saudi Arabia; and, more controversially, Sheikh Muhammad A. Hussein, the grand mufti of Jerusalem, the Sunni Muslim in charge of the Al-Aqsa Mosque.

OUR NEW PRESIDENT IS ONE OF THIS NATION’S GREATEST JOYS.

[CtH: I am SO GRATEFUL we have a president again who HONORS GOD and LOVES AMERICA.]

The gift that keeps on giving! A Christmas Story star Zack Ward, 47, reveals how much he STILL makes off the holiday classic 34 years on – and why he gives it ALL to his mom

Zack Ward, now 47, played iconic bully Scut Farkus, in A Christmas Story.  He was 13-years-old when he scored the role and still receives royalties from it.  The American classic was shot in Canada so his checks are in Canadian Dollars.

Ward says he is still recognized on the streets despite being over 20 years older. Zack Ward, now 47, who played iconic bully Scut Farkus, told Page Six he gets something, but it’s not make-me-rich money.

‘You’re going to be so disappointed,’ Ward said. ‘It’s basically about $1,800 every two years … and it comes in in Canadian money because we shot in Canada.’

Ward was 13 when he scored the role. He says he puts the extra money aside in a special account for his mother, should she ever need it.

IF YOU HAVE SOMEONE LIKE THIS IN YOUR LIFE, YOU ARE TRULY BLESSED

ADA, Minnesota, December 22, 2017 (LifeSiteNews) – Sheila Lewis was in a coma and hadn’t had anything to eat or drink for 12 days. Her family expected her to die, but instead she woke up and asked for a glass of water. Now she’ll be able to celebrate Christmas with her family.

Arends said the “world-renowned doctors” at Mayo Clinic told her they had “never seen a case like” Sheila’s, according to a Twin Cities report.  “They didn’t even know what they were dealing with,” the daughter added.

Sheila fell into a coma. She lay unresponsive for weeks. Arends explained that her mother’s condition was described as a “vegetative state.” Finally, the family decided to disconnect life support machines.

“Nothing more we could do,” Arends told Wallevand.

“We canceled plans and brought the kids down to say goodbye to grandma,” Brandt added.

Twelve long days – with no food, water, or oxygen assistance – went by. It had been six weeks since Sheila last uttered a word.

Then the miracle happened. Sheila asked for water.

“Did she just talk?” Brandt asked, according to Wallevand’s account. “Is she talking?”
Sheila not only awakened, but began to recover. When the Mayo Clinic heard about it, doctors asked to see Sheila.

THROUGH CHRIST, ALL THINGS ARE POSSIBLE!

YOU SIMPLY MUST WATCH THIS.

Over-the-top Christmas displays have turned normally quiet neighborhoods in New York, New Jersey and Connecticut into tourist destinations – and pitted neighbor against neighbor in a battle of privacy versus holiday cheer.

Amid the bedazzled homes in the Dyker Heights section of New York’s Brooklyn borough, December crowds from as far away as Japan are expected to top last year’s 100,000 gawkers, said Fran Vella-Marrone, president of Dyker Heights Civic Association. Tour buses arrive nightly from Maryland and elsewhere during peak season from Dec. 15 to Jan. 1.

You Got Served! Bronx teen, 13, dance-battles his TEACHER in front of a wild crowd – with both showing off amazing Harlem Shake and Pop-Lock moves

An amazing video shows Amir Wilson, 13, battle his dance coach in front of a packed auditorium filled with his fellow students at a Bronx, New York, school.

‘Battled my dance teacher at my school talent show. He killed it. It was lit. I had to give it to him at the end,’ he said in the original post on Saturday

“The old dame was due a modern makeover, so we thought why not venerate the real women inspiring us in 2017,” says WomenToLookUpTo.com, explaining it’s campaign to modernize the traditional Christmas angels that sit atop fir trees.

[CtH: I’m wondering how many of these things they sold, seeing as the minority of Americans who still approve of Hillary are the same people who hate Christmas and the flag![

Did Melania design the White House decorations as a sweet snub toward Michelle Obama?

The First Lady’s candy room – full of ornaments made from sugar – seems to aim as a pointed response to Michelle’s healthy eating.  Melania Trump decked-out the Red Room at the White House with sweet treats.  It seems the First Lady might be mocking the health-conscious Michelle Obama.  The Trump family previously debuted their holiday greeting card, which was a change from the Obamas’.  The card read: ‘Merry Christmas and a Happy New Year’ – signed the First Family.  The card axed the Obama family’s religion-inclusive note wishing Americans a ‘joyous holiday season’.

[CtH: Not likely, since I’ve seen Melania continuing the organic garden and talking about the importance of healthy eating in her own life.]

‘Christ’ Purged from Christmas and the Left Rejoices

Newsflash: The War on Christmas is over. Those who rightfully believe that Christ needs to be a part of Christmas and those rebelling against the politically correct tyranny looking to strip all spirituality from the holiday have lost.

According to the latest results from the Pew Research Center – and already being gleefully shouted from the rooftops of certain left-leaning media sites orchestrating the campaign against faith-based Christmas – while 90 percent of Americans still celebrate Christmas in one way or another, a majority find that the religious elements of Christmas are emphasized less and less and few of them care about that change.

If accurate, it not only tells us how truly lost we are as a nation, but underscores the dangers of absolute power, discrimination, and propaganda.