Not a day goes by without another athlete/politician/actor/window washer/ insurance agent/Wal Mart greeter/two-peckered billy goat is not accused of assault, rape, harassment, static cling, or the heartbreak of psoriasis. I feel a little left out, like the last kid picked when choosing up sides for a ball game. What I need help with is this:

I need some women to come forward and publicly announce I was naughty in the 1970s. It has to be that far back since the Pistol Pete thrill ride shut down many, many years ago. I have high blood pressure, severe emphysema, and a pacemaker, so it would kill me anyway. Doesn’t matter, nobody needs proof, just get a hold of Gloria Allred and have her call a news conference. It would make me feel better knowing I’m one of the cool people, even if it’s no more credible than the accusations against Judge Moore.

“He sexually assaulted me, and I have every right to tell the damn truth about it.”

IN CASE YOU DON’T KNOW WHO HE IS:

He was a Heisman Trophy winner while he attended (sort of) Florida State. The school won the national championship that year.

He was also accused of raping a white coed, he stole crab legs from a supermarket, and he stood on a table in the student dining hall screaming racial epithets. The district attorney came under enormous pressure not to prosecute by alumni and fans.

She said he “behaved poorly” right away as he shouted “in part, homophobic slurs at pedestrians.” Winston wanted food so she drove him to Los Betos Mexican Food.
Waiting in line at the drive-thru of Los Betos Mexican Food, “he reached over and he just grabbed my crotch,” Kate said, alleging that Winston held his hand there for three to five seconds and removed it only after she looked up in shock and said, “What’s up with that?”

Winston’s representative Russ Spielman denies the accusations. The team has not returned any media requests for comments.

Kate said she does not want money or fame, but wants the truth out. She found courage after so many women have come forward with their stories about powerful men abusing their position.

A former organizer for Hillary Clinton’s presidential campaign and a former volunteer for Sen. Bernie Sanders (I-Vt.) 2016 White House bid say they were the victims of sexual harassment while they were working for the candidates, according to a HuffPost report on Friday.  The allegations come in the midst of a wave of sexual harassment charges in the political realm.

CLEVELAND, Ohio – Ohio Supreme Court Justice Bill O’Neill, a Democratic candidate for governor, apparently trying to head off any criticisms from his opponents, revealed what he says are his sexual escapades over the years on a Facebook post.

[CtH: I’m sorry, but what?  Does telling on yourself suddenly make it A-OK?  Oh wait.  He’s the DEMOCRATIC candidate.  My bad.  Forgive me while I continue surfing through my scrapbooks and diaries from the 70s. ::coughcough::]

“Historical figure, hand kept going up the leg, I took it off. A women member was at the table, recognized what was happening, and said, ‘switch places,’” Michigan Rep. Debbie Dingell told CNN. Dingell said it happened in her first year of marriage to Rep. John Dingell, whom she wed in 1981.  But despite the 36-year time gap, Dingell said she’s still afraid to name the prominent perv.

[CtH: Reading between the lines … “prominent perv” is still in good favor with the power behind the Democratic Party.]

JOHN “THE CADAVER” DINGELL AND HIS FATHER BEFORE HIM HAVE REPRESENTED HIS DISTRICT IN MICHIGAN SINCE THE EDSEL, ABOUT 1957

WaPo Column From ‘Feminist:’ We Must Save Franken Because He’s a Democrat Who Votes the Right Way

I think there’s a case to be made that Franken’s behavior is worthy of scorn, but shouldn’t trigger his ouster from the Senate — especially in the absence of additional credible allegations reflecting a pattern of predatory behavior.

[CtH: But we should TOTES BELIEVE any and all unsubstantiated slurs and anonymous sources that tell tales on Republicans.]

I REMEMBER VIVIDLY WHEN CLINTON WAS FIRST ACCUSED OF GETTING HEAD FROM A YOUNG GIRL.  WILLIAM BENNETT WAS ON “THIS WEEK” WITH SOME FEMINAZI WHO SAID THEY WERE STILL SUPPORTING HIM BECAUSE “HE’S WITH US ON SO MANY OTHER ISSUES.”

BENNETT RESPONDED: “WHAT THAT MEANS IS THAT IF YOU’RE GOING TO BE A RAPIST YOU BETTER BE PRO-CHOICE.”

[CtH: Fortunately for the Left, rapists are very much pro-choice.  They like nothing better than being able to drag their victims down to the local PP clinic and getting the evidence of their crimes sucked out.]

One glaring example proves this point. Remember the man hailed by liberals and the mainstream media as the “Lion of the Senate,” Ted Kennedy? His truly bizarre, off the wall, sexual harassment antics were widely known long before he passed away in 2009 yet there was no condemnation of him and, of course, no call for him to leave the Senate.

GQ magazine published an article about the “waitress sandwich” incident involving both Kennedy and fellow senator Chris Dodd in their February 1990 edition which was reprinted on April 14, 2016. It reveals in excruciating detail the extremely humiliating sexual harassment of a waitress, yet no liberal voice was raised against Kennedy (or Dodd) even though the incident was common knowledge.

I HAVEN’T THE WORDS TO CONVEY THE CONTEMPT I HARBOR FOR THIS STINKING PIG. NOT ONLY DID HE LIVE OFF HIS DEAD BROTHERS’ NAME FOR 40 YEARS.  HE RUINED THE EDUCATION SYSTEM WHEN BUSH ALLOWED HIM TO WRITE THE BILL.  HE BEGAN THE ATTACKS ON CONSERVATIVES WHEN HE ACTED SO SHAMELESSLY DURING THE ROBERT BORK CONFIRMATION HEARINGS.  HE DIED WAY TOO LATE TO SUIT ME.

[CtH: It’s really good for my blood pressure that I believe in God’s perfect justice.]

Some really good stuff in the reply section today. 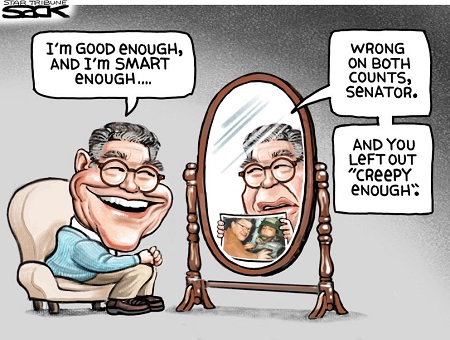 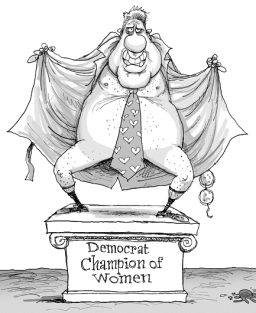