Did CNN FAKE this?

From Allen West: “With the whole world watching the tragic loss of life and property in Texas, CNN corespondent Drew Griffin decided to play the role of hero and assist in the saving of a man in distress, which on the surface is certainly worthy of applause.”

When I saw the clip, I thought it was a bit much when the guy thanked them for “saving my life.” But it gets worse. A sharp-eyed tweeter noticed that the “heroic” talking head apparently took the time to CHANGE HIS CLOTHES in the middle of the so-called rescue. When he first runs behind the wheelchair sign, you can see he’s wearing the red hoodie with shorts and sandals. But later, he’s wearing black pants. 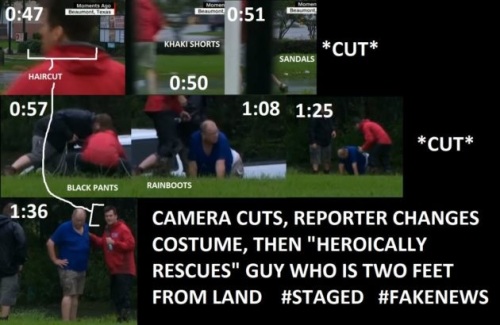 2 responses to “Did CNN FAKE this?”