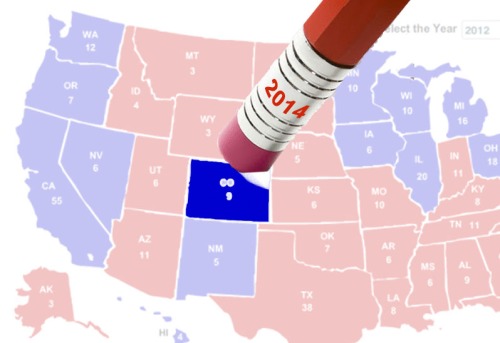 From my Fox News Update email:

OBAMA GETTING COLD SHOULDER IN COLORADO

If President Obama is as thin-skinned as his critics say then his ego is in for a bruising in Colorado today. Obama will be campaigning in the Centennial State – one of the key battlegrounds in his bid to hold the Senate for his party – but neither the incumbent senator he is trying to save nor other top-tier Democratic candidates will appear in public with the president.

Adding insult to injury, embattled incumbent Sen. Mark Udall, D-Colo., will appear in private with Obama tomorrow for the president to tap his extensive donor network in the state. Udall’s team cited scheduling problems that would keep the senator, locked in a toss-up race with challenger Rep. Cory Gardner, R-Colo., from appearing at a daytime campaign event where there will be reporters present. But Udall’s schedule will clear up just in time for the senator to arrive at a closed-door donor event in Denver.

Even more galling: Democratic Gov. John Hickenlooper, facing a tough re-election test, and Andrew Romanoff, the former state House speaker now running for a seat in Congress, will both be no shows for Obama.

Candidates ditching unpopular incumbents in public is nothing new, but the Colorado case is telling for Obama whose “Western strategy” to permanent Democratic majorities was doing well. His jaw-dropping 2008 convention, complete with Greek pillars, was held in Denver with Mayor Hickenlooper hosting. Obama won the previously reddish state by a stout 9-point margin.

In 2010, Democrats cruised to victory in Colorado where Obama’s support for Colorado Sen. Michael Bennet got him the current chairmanship of the Democratic Senatorial Campaign Committee. In 2012, Obama easily won the state again, though by a smaller 5-point margin.

Now? Ahem. Obama’s latest job approval rating in Colorado was 38% and Udall, who rode Obama’s coattails in 2008, is looking like an increasingly bad bet for re-election. The president’s energy policies and overall economic concerns rank high on the list of voter concerns, but ObamaCare is proving truly toxic. Colorado embraced the health law but has struggled badly with implementation. The Denver Post reports today that the drop-out rate for the state’s ObamaCare program is now forecast to be twice as bad as first projected.

Obama once boasted of being a transformational political figure for his party. Well, yeah … but only if by “transformational” you mean “total disaster.”

One response to “Obama’s COld Shoulder”