WASHINGTON, D.C.[DuffelBlog] — Following the Taliban’s complete takeover of Afghanistan late last night, Pentagon Press Secretary Peter Cook noted in an early morning press briefing that the Pentagon remains “generally positive” about the war effort and that “there is minimal cause for concern.”

“That’s how things go in a protracted counterinsurgency,” Cook told reporters. “You face some minor setbacks regardless of how many troops lose their lives or how many billions of taxpayer dollars are spent equipping local defense forces incapable of defending their own country.”

After the Taliban overran Afghan forces in Helmand earlier this year and took over the city of Kunduz this week, sources say the Obama Administration and many senior defense officials seemed surprised that major media outlets expressed even the slightest bit of interest in a war over a decade old.

At Central Command in Tampa, Fla., Gen. Lloyd Austin — who oversees forces in the region — assured reporters there was little cause for concern.

“We’ve seen this time and time again,” Austin said. “This modest spike in Taliban attacks shows that our strategy is working. These massive coordinated attacks are merely the death throes of an insurgent movement.”

Read the whole satire article at the Duffel Blog.

The Trading Traitor in the Oval Office 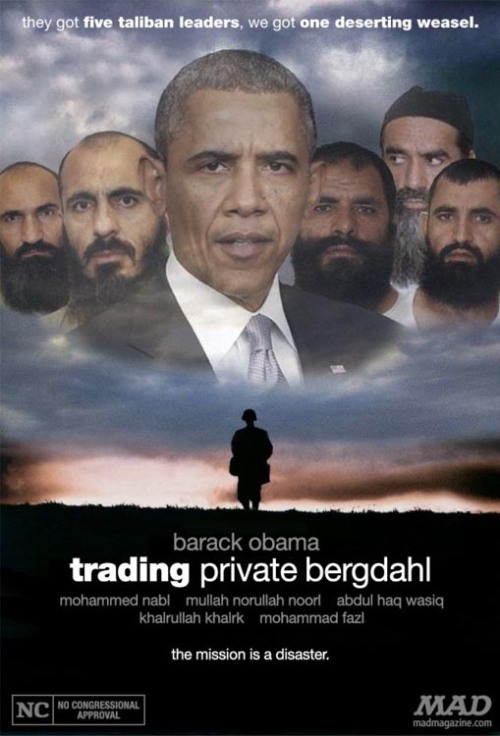 The Obama administration knew that Bergdahl was planning to switch sides, but when Bergdahl’s platoon mates said he had deserted, Obama et al. said they were lying.

Comments Off on The Trading Traitor in the Oval Office

Following the announcement that the Army will be prosecuting Bergdahl for going AWOL, tweeters asked Brazile if she was going to apologize now. Her ONLY response:

Huh?  I’ll tell you what would give me joy, Donna. Having you and all your racist buddies stop demanding that Barack Obama be judged solely by the color of his skin.

Here are a few other choice remarks various tweeters had for and about Donna:

Meanwhile, BizarrØland’s State Department spokeswoman, Jen Psaki, told Megyn Kelly they were totes standing behind the exchange because … wait for it …

“We have a commitment to our men and women serving in our military, defending our national security every day, that we’re going to do everything to bring them home if we can and that’s what we did in this case.”

Unless, they’re locked up in a Mexican prison for no good reason, in which case, Barack’s got no pen or phone.

Comments Off on Being progressive means never saying you’re sorry

I keep seeing and hearing people who are completely clueless how any American president can behave the way Obama does.

For example, retired General Barry McCaffrey called the Bergdahl-Gitmo prisoner swap “incomprehensible” because the White House knew within days of Bergdahl’s disappearance that he had deliberately deserted to join the Taliban.

Gen. Barry McCaffrey: WH Comments on Bergdahl Are ‘Incomprehensible,’ They Knew What Happened

But if you look at Obama’s behavior from the viewpoint of Muslim End Times prophecies, then everything he has done makes total sense.

Muslim eschatology predicts the rise of a global ruler who will convert all people to Islam. Muslims call him Imam Mahdi. One of the pre-requisites for Mahdi’s rise to power is the destruction of the “little Satan” – Israel – and the “great Satan” – the United States. President Obama has just been doing his part to help.

A year ago, when President Obama held a press conference in the Rose Garden to celebrate the return of the “captured” Bowe Bergdahl, he treated Ma and Pa Bergdahl like visiting royalty.

According to Allen West [http://allenbwest.com/2014/06/bombshell-first-words-bergdahls-father-white-house-arabic/], Pa Bergdahl’s first words at the White House were “bism allah alrahman alraheem”, which is an Arabic phrase from the Qu’ran that means “in the name of Allah the most gracious and most merciful.”  Pa Bergdahl also wore a Muslim-style beard, but the lapdog press insisted he was a “devout Presbyterian.”  (Suuuuuuuuuuuure he is.) 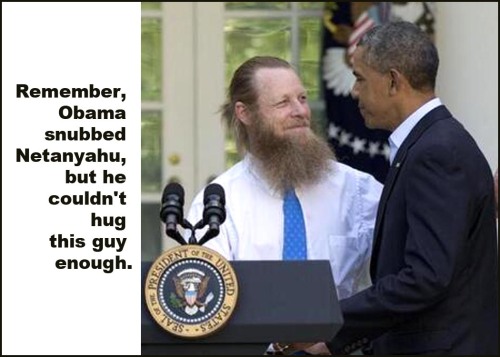 Last week, Bowe Bergdahl was charged with “desertion with intent to avoid hazardous or important service” (Article 85, UCMJ) and “misbehavior before the enemy” (Article 99, UCMJ). He will face a military court on April 22nd in San Antonio, Texas.

In the summer of 2014, DAESH (aka, ISIS, ISIL) attacked and captured the village of Dabiq, not because it has any military significance, but because Muhammad predicted the Day of Judgment will come only after the Muslims defeat Rome at al-`Amaq or Dabiq, two places close to the Syrian border with Turkey. Taking Dabiq from Sunni Muslims was viewed as an important step toward bringing about the rise of Imam Mahdi.  http://www.businessinsider.com/isis-is-making-strategic-decisions-in-syria-based-on-ancient-islamic-prophecy-of-the-end-time-2014-10

A sect of Shi’ite Muslims have long believed that the death of Saudi Arabia’s King Abdullah would be a harbinger for the imminent rise of Imam Mahdi to world power. King Abdullah died on January 23, 2015. https://www.thetrumpet.com/article/12373.19.0.0/religion/islam/king-abdullahs-death-fulfills-end-time-prophecies-say-some-shiites

Comments Off on Muslim eschatology and Obama’s foreign policy

Remember when Mr. Unicorns for World Peace was gonna make everyone love everyone else? Huh.

In the negotiations over Iran’s nuclear program, the Obama administration has given the Iranians 80 percent of what they want. Israeli officials believe the deal will allow Iran to reach nuclear “breakout capacity” within months. 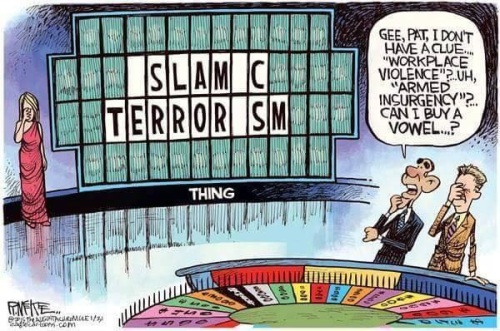 Just days after an Obama administration official went to great pains to explain that the Taliban is not considered a terrorist group, the Taliban took credit for the killing of three American contractors.
http://www.foxnews.com/world/2015/01/30/3-american-contractors-killed-by-gunman-in-afghanistan 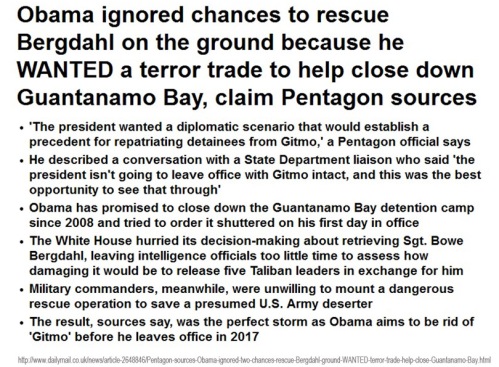 Bowe Bergdahl was released in exchange for five high-ranking Taliban terrorists. Obama is basking in the dubious glory of negotiating with bloodthirsty muderers,but there’s more to this…much more.

This is Bowe’s parents, Bob and Jani Bergdahl, at Obama’s dog and pony show in the Rose Garden yesterday.

HIS BEARD SHOULD GIVE YOU A CLUE.

This is what he tweeted and then deleted:

There is a law that Obama cannot release any prisoners from Gitmo without notifying Congress beforehand. Of course,he’s never given a rat’s ass about laws. What this really was,IMHO,was to change the subject from the true heroes,our vets,who are dying like flies under this poser’s watch.

Some republicans can see through this charade,but their protestations will be ignored or they’ll be made out to be cold-hearted ogres who’d rather an American soldier remain captive to the Taliban murderers he actually tried to join.

The Spite House spin,put out by that paragon of honesty Susan Rice this morning, was that he was in danger and there was no time to consult Congress. Just like we had to pass the stimulus scam in 24 hours or the country would disintegrate.

This is from first-hand accounts of people who were there.

So much for America’s long standing ban on negotiating with terrorists.

BOLTON HAS IT RIGHT:

President Barack Obama apparently traded five jailed jihadis held in Guantanamo for one American soldier, despite federal law, which requires Congress to be notified before prisoners are transferred.

Obama used a Rose Garden press event to tout the surprise trade — which he won by making critical, last-minute concessions — while the parents of the freed soldier, Bowe Bergdahl, stood alongside.

At the end of brief event, the soldier’s father, Bob Bergdahl, recited the most frequent phrase in the Koran — “Bismillah ir-Rahman ir-Rahim” —which means “In the name of Allah, most Gracious, most Compassionate.”

After Bergdahl finished his statement and his praise for Allah, Obama hugged him.

The Taliban echoed Bergdahl, saying the trade happened “due to the benevolence of Allah Almighty and the sacrifices of the heroic and courageous Mujahidin of the Islamic Emirate.”

Keith Kofflet at WHD has a profile of the five filthy pigs Obama let out to kill more Americans:

By trading very senior and very dangerous Taliban leaders for a single U.S. soldier, President Obama has created grave peril for every American, and he has branded a “K” of the forehead of every U.S. serviceman and woman serving overseas. The “K” stands for “Kidnap me.”

Because kidnapping gets results.

I wish I could do something fancy,but it is what it is.

If the accusations being made by the Extortion 17 families are true, the Obama Administration is guilty of 38 murders.

May 10, 2013: Parents of Aaron Vaughn interviewed by Megan Kelly

Extortion 17 could be a bigger scandal and betrayal of Americans than Benghazi. While Benghazi resulted in four American deaths, Extortion 17 resulted in 38 deaths, including nearly two dozen Navy SEALs.

Many of these SEALs were made famous, credited with the killing of Osama bin Laden.

The Chinook helicopter they were aboard was shot down by Taliban forces, which written testimony confirms knew the elite forces were coming into the area.

Families are going after the Obama administration for what they believe were leaks that led to their family members’ deaths.

According to Rep. Jason Chaffetz (R-UT), chairman of the House Oversight and Government Reform subcommittee on National Security, “We’re going to dive into this.”