WHEN THE ROMANCE COOLS

Without them, he’d be just a community-organizing Chicago street hustler with a white education. He is a rare case of someone who has had everything in life handed to him through the sacrifice of others while he has done virtually nothing but reap the benefits. He has shown his gratitude to everyone who sacrificed for him by turning and farting in their faces… with one exception: his Iranian-born Rasputin, committed muslim and slumlord, Valerie Jarrett.

His army of media whores fell passionately in love with him when he read the keynote speech at the Democrat convention in 2004. I hadn’t seen a reaction to a speech like that since David Brinkley fairly shot a wad in his trousers over Mario Cuomo’s speech at a similar venue years earlier. The media whores hoisted the young biracial Kenyan posing as an American on their shoulders and carried him to the presidency, never allowing anyone to broadcast any hint of what and who he really was.
The Republican nominee even accomodated him by turning on his own VP running mate and allowing him to walk into the presidency where the palace guards stood, protecting him from any criticism whatever.

But all the media could not save him from losing first the House, then four years later the Senate, as the concerned citizens of America watched him ignore the constitution and set himself up as the arbiter of all things.

They helped him get reelected by savaging anyone they deemed a real threat to his power. Vote-rigging and blatant fraud also helped. The nanosecond he won the office for the second time he dropped what little facade he ever showed of caring about anything but his own authority and the benefits of the office.

It was hardly noticeable at first, but eventually some of his devotees started criticizing his ham-handed way of ruling what he saw as his serfdom. Now, even Mr. “tingle up my leg” Matthews and “kind of like a god” Thomas can be a little critical. It seems like a lover who no longer has much interest and is eyeing another to enter into an intimate relationship. Still, they are a possessive lover who will protect their old flame as long as it suits their cause.

After the disastrous address he read from the Oval Office, they felt free to say some negative things about their old flame, as if most of the country hadn’t had the revelation long ago.

‘Nothing new’…’No sense of bipartisanship’

Panel Destroys “Out of Touch” Obama Over Failed ISIS Strategy, Refusal to Use Term Islamic Extremism

Longtime CNN anchor John King called the President “deeply out of touch,” argued he should be taking a tougher tone and slammed the administration for failing to mention Islamic extremism as part of the problem. Other panelists piled on Democrats as a whole for being all over the map with their response to the attack.

Tom Brokaw On Obama: “I Find Almost No One Who Is Very Happy With His War Policies”

“He’s already talked about staying a course that we’ve already been on, and it hasn’t been working, “ Engel said. He did credit the president for the first point of his strategy–going after the plotters of terrorism–which has been in the form of raids by special operations forces and drone strikes. Yet, it pretty much goes downhill from there.

THE MIDDLE EAST KNEW WHAT HE WAS LONG BEFORE HE BECAME DICTATOR.
THEIR METHODS DO, HOWEVER, SEEM A BIT EXTREME
WHOA: Popular Egyptian TV host says Obama should be tried and then ‘sat on an impalement rod’
Egyptian TV’s Ahmed Moussa gave a blistering rant aimed at Obama for being an ally of terrorists, calling him a liar and saying he should be put on trial and then executed by being forced to sit on an impalement rod. Yikes!

He points out that his beef is not with the American people, who he says are very respectful, but with Obama who said just days before the San Bernardino terrorist attack that there is no threat to American citizens. He called Obama a liar again and said that all allies of terrorism are liars.

THEIR NEXT LOVE AFFAIR

MEDIA FAIL: What the San Bernardino shooters left at home

There can be no peace 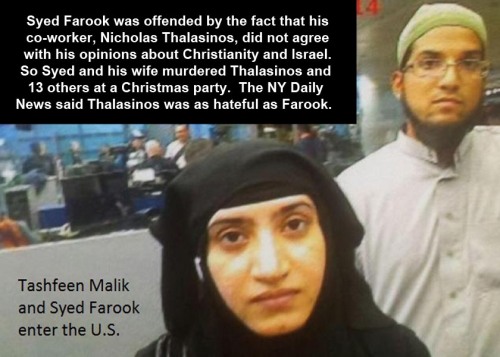 The Daily Sunny Ep 1 – Are you worried about moderate Muslims? Don’t be.

These women offend me!

Can I get a hashtag or something?

Comments Off on These women offend me!

The Inland Regional Center in San Bernardino, California, serves developmentally disabled people. The people who work there are good, caring folks. Muslim extremists murdered fourteen of them during a holiday party.

The victims were a veritable rainbow of of the Left’s favorite demographic groups — multi-racial, single, married, gay and immigrant. One had just gone shopping for her wedding dress. Another left behind a 22 month old son.

Usually, the Left would go ballistic over this kind of victimology. So isn’t it interesting that their reactions to the San Bernardino shooting have ignored the victims entirely.

I guess we know now who the Most Favored Democrat Demographic is these days.

PREDICTABLE AS A SUNRISE

Another senseless act of domestic terrorism. Another brutal massacre of helpless unarmed citizens. Another political opportunity for socialists to blather about blaming a thing with no mind, no conscience, no will of its own. To a man, they rushed in front of cameras before any facts were known and blamed guns.
OUR VERY OWN GRUNT WAS SPOT ON:
Barack Pretty Sure These Fine, Religious Young People Were Overpowered by Their Own Evil Guns

Guns “Still on the Loose.” Must Be Stopped “Before They Kill Again.”

This poor guy was completely innocent. A “tragedy,” of course. 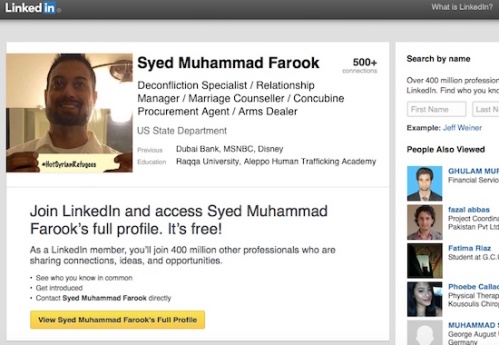 THIS WAS THE COVER ALREADY PRINTED YESTERDAY FOR PUBLISHING TODAY:

Compare and Contrast How The Candidates Responded to San Bernardino Shooting 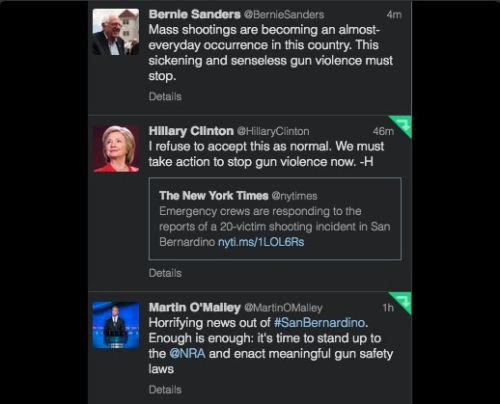 Republicans–presidential candidates, senators, congressmen and other GOP officials–offered thoughts and prayers for the victims of the mass shooting in San Bernardino, California on Wednesday. In response they were attacked online by liberals, including Democratic Party U.S. Senator Chris Murphy of Connecticut.

Your “thoughts” should be about steps to take to stop this carnage. Your “prayers” should be for forgiveness if you do nothing – again.

Leading Republican presidential candidate Donald Trump issued a statement that offered support to law enforcement.
California shooting looks very bad. Good luck to law enforcement and God bless. This is when our police are so appreciated!”

TED CRUZ:
Our prayers are with the victims, their families, and the first responders in San Bernardino who willingly go into harm’s way to save others.

Chris Christie:
Praying for all those victimized by the shootings in San Bernardino, California today.

Daily Kos’ Markos Moulitsas:
At least 14 dead and 14 injured. But lucky for them, the GOP is offering up loads of thoughts and prayers!

The Guardian’s Jill Filipovic went after Ben Carson:
If only there were something politicians could offer, other than thoughts and prayers, to stop gun violence.

Cable TV writer/producer/director Miles Kahn:
My thoughts and prayers are with the GOP candidates, who must now strategize how to continue to suck up to the NRA with a straight face.

Think Progress Director of Video and Contributing Editor Igor Volsky obsessively posted over two dozen tweets attacking and mocking the GOP and Republican congressmen, senators and presidential candidates for offering thoughts and prayers including this one and one going after Speaker Paul Ryan:
Excited for GOP proposal to fight ISIS with thoughts and prayers

Gene Weingarten, Washington Post:
Dear “thoughts and prayers” people: Please shut up and slink away. You are the problem, and everyone knows it.

An observation in conclusion:
Which represents a sane person with good values. Person A) “we offer thoughts & prayers”. Person B) “Screw your prayers!”

Money-grubbing ghouls. How better could you describe Howard Dean’s group, Democracy for America? They can’t even wait for the blood to dry before exploiting the slaughter in San Bernardino for dollars.

This NewsBuster just received an email from DFA admitting “the tragic situation in San Bernardino is still going on.” And yet, because Republicans respect the Second Amendment, DFA accuses “Paul Ryan and the entire Republican party” of “aiding and abetting terrorists,” “standing with terrorists,” and being people who “enable terrorists.” Of course it’s all about that button at the bottom of the email: DONATE.

Remember “dissent is patriotic”? That only applied pre-Obama. It’s now inoperative. Unless you agree with the Second Amendment-ignoring liberals, you’re nothing but a terrorist-enabler.

You Think Geraldo Rivera Wishes He Could Take This Tweet Back?

VIDEO Shows Police Officer Telling Workers Who Are Being Evacuated, ‘I’ll Take a Bullet Before You Do, That’s For Damn Sure’

APPARENTLY THERE WERE BLACK LIVES MATTER GOONS PRESENT
People who were inside the Inland Regional Center during Wednesday’s attack put their lives in the hands of an officer who led them to safety, a video shows.

“If you’re not cool, I’m not walking them,” the officer shouts to an unseen colleague as the people stand anxiously waiting.

When satisfied the way is clear, the officer tells the people to keep their hands “where I can see them,” and head for a deputy, where they’ll turn left.

The people comply, showing their hands and remaining mostly silent

WORLD NET DAILY HAS THIS LIST OF TERROR ATTACKS SINCE 9/11.