And why the Progressive-Left is doomed to fail.

Some people say that all religions depend on faith, while all secularisms rely on reason.  But G.K. Chesterton said that was silly, because “reason is itself a matter of faith.  It is an act of faith to assert that our thoughts have any relation to reality at all.”

And I would posit that my faith is eminently reasonable.  I’m a very logical, brain-oriented kind of person.  The idea of making a blind leap of faith was repugnant to me.  I did not commit to Jesus until I had enough logically persuasive evidence to make it reasonable to do so.

But even belief in a deity does not distinguish religion from secularism.  For example, religious Buddhism does not posit the existence of a supreme being, while some forms of secular Environmentalism posit that the whole biosphere is a living entity called Gaia.

Eventually there is something to which every knee bows. This is the person’s god.

I would like to posit that the Progressive Left as a whole constitutes an incomplete religion, but that within the Left are groups of individuals who have ceded ultimacy to one or another of the Left’s sacred cows.  For example, Black Lives Matter puts blacks first, Third Wave Feminism puts women first, LGBT activists put sexual deviants first, and so on.

Budziszewski explains that “what you can tolerate pivots on your ultimate concern.”

Because different ultimate concerns ordain different zones of tolerance, social consensus is possible only at the points where these zones overlap.

Should contending concerns become sufficiently unlike, their zones of tolerance no longer intersect at all. Consensus vanishes.

At the moment, the various “denominations” on the Progressive Left truly agree only on this doctrine:  Democrats are good and Republicans are evil.

Beyond this, their zones of tolerance diverge, as we’ve seen recently with Transgender activists who no longer feel they can be part of the LGB community and Pro-Life Democrats who have been given notice that the party no longer has room for them.

This divergence and its concomitant intolerance is why I believe that the Progressive Left cannot succeed in the long run.

Based in part on “The Illusion of Moral Neutrality” by J. Budziszewski

Comments Off on Ultimate Concerns

END_OF_DOCUMENT_TOKEN_TO_BE_REPLACED

Comments Off on Some After-Easter Religious Humor

Enjoy This Easter; The Apocalypse Clock Is Counting Down Faster Than the US Debt Counter After Yesterday

Gruntington Post, Ann Arbor, MI, USA, Good Friday, 2016 – We keep making history here in the Good Ol’ USA, whether we want to or not.  Last Christmas, the Detroit Chapter of the Satanic Temple made history by conducting the first Satanic ceremony on the State Capitol steps in Lansing, Michigan under the black flag of the Satanic USA, apparently.  And this Good Friday, they made some more history by conducting a “Sanctions of the Cross” demonstration in front of a Planned Parenthood to protest legislative restrictions on baby sacrifice.

As Samantha Allen of The Daily Beast put it: “It was a showdown that can only be described as biblical: The Satanic Temple of Detroit versus the Pro-Life Action League outside of a Planned Parenthood clinic on Good Friday.”

You can see other photos at the Daily Beast, depicting their leader, Jex Blackheart or Jinx Blackmore or whatever her/his name is, staring at the camera wearing a crown of thorns and carrying a cross.  I’d prefer not to reproduce them here, thank you.  Talk about “cultural appropriation,” huh?  You’d think all the social justice snowflakes in Ann Arbor would be all over this, wouldn’t you?

Read more excellent snark about these historic events at The Other McCain.

But white and blue lights to honor Mother Theresa? Not so much. 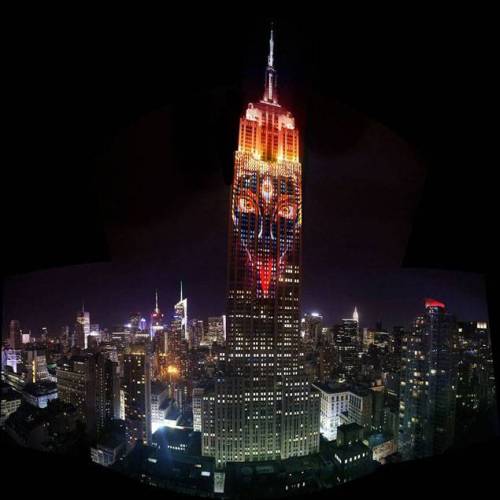 The Times of India – In a breathtaking spectacle, Goddess Kali was projected on the Empire State Building in New York. 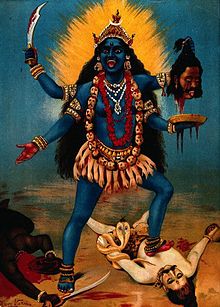 Artist Andrew Jones designed the portrait of the goddess to make the point that Mother Nature now more than ever needs a fierce avatar to fight the dangers of pollution and extinction, Firstpost.com reported.

Uh huh. I know what Maa Kali is. Patron Goddess of the Thuggee Cult. Goddess of time, destruction and death.

A variety of writers and thinkers have found Kali an exciting figure for reflection and exploration, notably feminists and participants in New Age spirituality who are attracted to goddess worship. [For them], Kali is a symbol of wholeness and healing, associated especially with repressed female power and sexuality. [However, such interpretations often exhibit] confusion and misrepresentation, stemming from a lack of knowledge of Hindu history among these authors, [who only rarely] draw upon materials written by scholars of the Hindu religious tradition.

That figures. My Indian friends are Christians, and they’re not fond of Kali. Just sayin’.