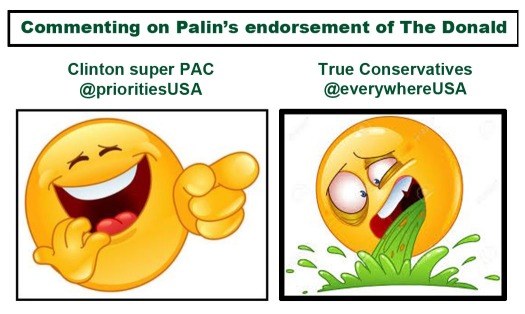 Pam Geller notes two red flags she has seen in Palin’s past behavior that indicated she is not the ballsy, principled conservative leader we thought she was. I.e., when she quit the Governorship of Alaska and when she promised, but never delivered, a written statement of support for 911 family survivors to read at a Ground Zero mosque protest.

Sarah Rumpf lists specific instances in which Trump and Palin have been on opposite sides in the past. I.e., abortion, private property rights, courtesy towards the disabled, politicians who flip flop, marriage, and putting the rights of the little guy ahead of government and business thugs. Since Trump is shooting for top of the ticket, one must conclude that Palin has decided to sacrifice principle for whatever it is The Donald has promised her.

Doug Ross provides this handy graphic comparison. At http://directorblue.blogspot.com/2016/01/your-handy-dandy-trump-vs-cruz.html, you can click on each policy or issue to read the back story.

Free speech is under attack and we need to push back before we lose it.

The gunmen who attacked Geller’s event, reports said, drove over 1,000 miles to do so. Worse yet, the media has blamed Geller for being attacked. Hannity made that the subject of his “question of the day,” which he posted on Facebook. Nobody supported the media.

One commenter posted, “What if a couple devout Muslims shot up a Gay Pride Parade because they found it ‘offensive to Islam’. Does anybody really think the left would be condemning the Gay community for provoking Islam for flaunting Homosexuality by having a parade? ‘Situational Hypocrisy’, thy name is liberal.” 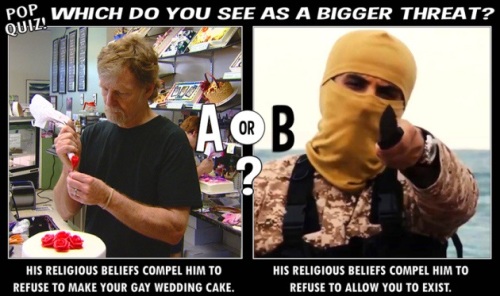 One of my favorite westerns is Quigley Down Under, set in turn-of-the-century Australia and stars Tom Selleck and Alan Rickman (bad guy from Die Hard.) Selleck plays a Colorado cowboy who traveled cown under for a job. Rickman fancies himself as a gunslinger in the American West. He, along with two cronies, face a showdown with Selleck.

Rickman: “Some people wereare born in the wrong century…I was born on the wrong continent.”
Selleck: “This ain’t Dodge City…and you ain’t Bill Hickok.”
With that, Selleck draws his pistol and guns down all three. (He IS the hero, after all.)

Last year some Jihadis got pissed off about a French satire magazine were printing cartoons of the pedophile they swear allegiance to. With the strict gun control laws in France, the employees at Charlie Hebdo were helpless as the butchers swarmed in and slaughtered twelve innocents.

The attack yesterday took place around 7 p.m. local time at the Curtis Culwell Center in Garland, Texas, northeast of Dallas. The occasion was the “Muhammad Art Exhibit and Cartoon Contest,” a sold-out event organized by the American Freedom Defense Initiative (AFDI), a group founded by activist and “Atlas Shrugs” blogger Pamela Geller, and by Jihad Watch, a website run by Spencer that is affiliated with the David Horowitz Freedom Center, which publishes FrontPage. Geller and Spencer attended the event.

When I first heard of the attempted attack by two individuals I thought: this ain’t Paris. They have guns in Texas and they can damn sure use them. And they did.
My second thought was that the two attackers were probably negroes who “converted” to Islam as an excuse to commit violence.

Official:  One of Texas Shooting Suspects IDed
One of the suspects in the shooting in Garland, Texas, late Sunday has been identified as Elton Simpson, an Arizona man who was previously the subject of a terror investigation, according to a senior FBI official. 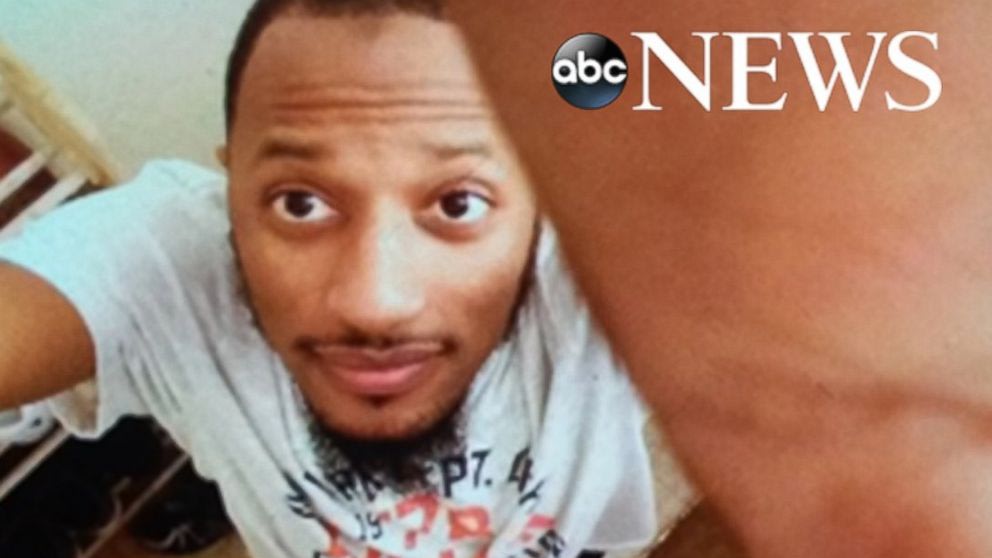 The UK Telegraph was outraged over the massacre in Paris. I’m posting this to show the liberal European mindset:

‘This is a war’: The woman behind anti-Islamic Muhammad cartoon contest and her long history of hatred
Blogger Pamela Geller, 56, president of the American Freedom Defense Initiative, has been highly critical of Islam for years
Geller’s group was behind anti-Islamic ads that began appearing on New York City buses and subway entrances last year
She said Sunday that the shooting showed how ‘needed our event really was’
This is the REAL hatred, folks.
YOU’LL NEVER READ A MORE SNEERING ACCOUNT OF SOMEONE WITH COURAGE

IT DIDN’T TAKE LONG FOR THE LEFT TO LEAP TO THE DEFENSE OF THE ATTEMPTED MURDERERS
I can’t say I didn’t see it coming. Instead of finding fault with the attackers that tried to KILL Pamela Geller for using her freedom of speech, CNN’s Alisyn Camerota calls her a bigot and attacks her on air. Pamela handled it expertly and destroyed every criticism tossed her way.

I NEVER EVEN KNEW CAMEROTA WENT OVER TO THE DARK SIDE. JUST GOES TO SHOW YOU.
Pamela Geller Battles CNN Host over Garland Shooting: Why Is Media ‘Targeting’ Us?

THERE WILL BE MUCH MORE ABOUT THIS, BUT IT’S EARLY. STAY TUNED.