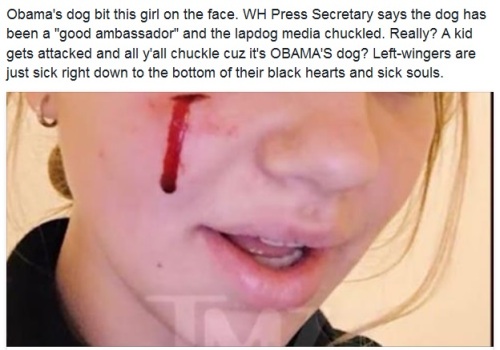 When White House Press Secretary Josh Earnest was asked about the incident, he dodged the question and instead claimed that both Sunny and Bo had been “good ambassadors” and “represented themselves and our country quite well.”

Rather than call Earnest out on his spin, the White House Press Corps reportedly laughed at it. 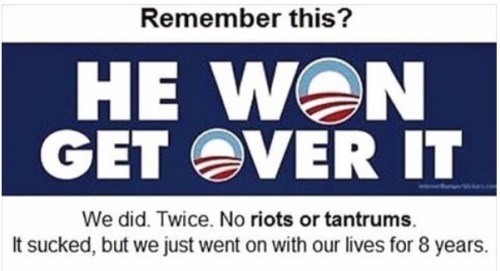 We put up with 8 years of what we have good cause to consider the worst administration ever.  It’s time for the Left to put on their Big Kid Panties and do the same.

Apparently, it’s true that both the DNC and the RNC got hacked.  But two other things are also true:

One — “Intelligence officials told ABC News that the fact that only Democrats’ information was released isn’t enough to prove the motivations of the Russian actors.”– ABC News

Two — There is zero evidence that the Russians or anyone else hacked actual votes.  Obama’s Press Secretary, Josh Earnest, confirmed this forcefully more than a week ago. 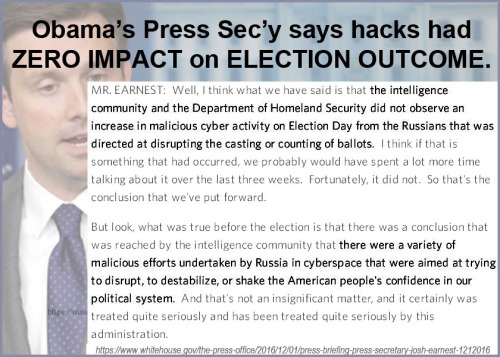 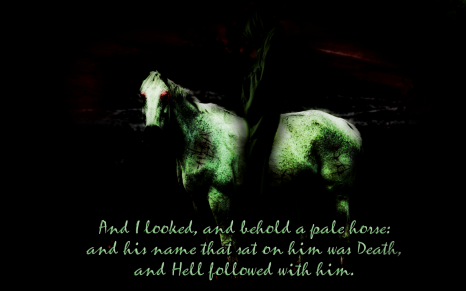 The Republican National Convention begins today. It promises to be a far cry from anything we’ve seen in the past. What transpires inside the convention hall will get little notice unless you watch C-Span. There will be a roster of speakers after which Donald Trump and Mike Pence will claim the nomination to run against the Clinton Crime Family and the Democrat fraud machine. Most of the networks’ attention will doubtless be focused on the hell being raised by the professional agitators and the amateur rabble being bussed in to create as much violence as possible, all being blamed on republicans.

Republican convention kicks off amid tensions of terrorism, cop killings

In Cleveland, security was already stiff ahead of the convention, with thousands of local police and federal agents on the roads and controlling intersections.

Checkpoints and security fencing have gone up around the downtown locations hosting the convention, the press and some of the delegates’ hotels, and police patrolled in cars, on foot and on horseback.

“Homeland security officials have been in close touch with local law enforcement in Ohio and Pennsylvania to ensure the safety and security of not just the party nominees but the convention delegates and the reporters who will be in attendance,” Earnest said. “I know their efforts are also focused on the First Amendment rights of people who may want to register a protest at the conventions. Those rights will certainly be protected.”

THERE IS A VERITABLE MENAGERIE OF VIOLENT LEFTIST GROUPS WHO HAVE BEEN ISSUED PERMITS, UNFORTUNATELY, TWO PRO-TRUMP GROUPS WERE REJECTED. GO FIGURE
Cleveland Police Union Chief Calls On Governor To Suspend Open Carry Firearms During RNC, Kasich Says Can’t Do It

“Ohio governors do not have the power to arbitrarily suspend federal and state constitutional rights or state laws as suggested.” Hours earlier, the president of the Cleveland police union asked Kasich to ban all open carrying of weapons in Cuyahoga County after six police officers were shot in Baton Rouge on Sunday morning, three of them fatally.

Chaos in Cleveland – Liberal ‘Astroturfed’ Protests Planned
Protests are planned for this week in Cleveland while the Republican Party confirms the nomination of billionaire businessman Donald Trump for President at the Republican National Convention (RNC). The Democratic Party has set aside almost $1 million to create chaos in Cleveland. In addition, as of June 22nd permits for 23 protest groups were approved for the week in Cleveland, many of them from radical far left and/or anti-Trump groups (e.g. Code Pink, ‘Stand Together Against Trump’ and ‘Stop Trump’). Alternatively, two groups were denied permits, one of them a pro Trump organization, Citizens for Trump.
Don’t be fooled into believing that protests expected in Cleveland this week are random events stirred up by Cleveland residents or average Midwesterners. Like most, if not all the protests staged by the liberal left and promoted by the liberal mainstream media, the anticipated protests in Cleveland were prepared for weeks ago. The astroturfed (i.e. phony) protests do not represent the majority of Americans and therefore have to be arranged in advance.

OBAMA’S ARMY ARE JUST ITCHING TO PROVOKE SOMEBODY. HOPEFULLY, NO POLICE OR INNOCENTS WILL COME TO HARM.
Cleveland Police Given “Stand Down” Order at RNC – Protesters to Wreak Havoc on Republicans and City
Remember when thugs from the left attacked Trump supporters at his San Jose rally? The San Jose mayor and police chief claimed it would have been “too dangerous” for officers to do their jobs by defending Trump supporters?

That same “logic” is being applied by Cleveland officials, who have given up on even trying to control the radical left.
If you’re attending the RNC, do not travel alone. Be street smart and travel in groups.
Police will not help you.
Police are going to be on bicycles. (I kid you not.) They will NOT defend Trump supporters who are attacked. 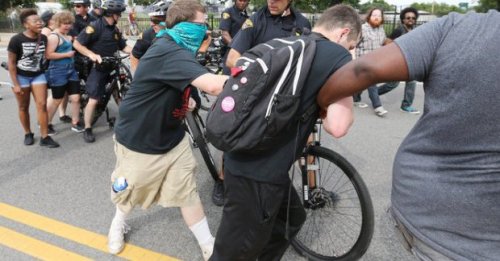 LIKE SCAVENGERS ON CARRION
The mobilization effort aims to capture the energy of Democrats watching the GOP convention each evening and harness it into a stronger voter base. President Barack Obama often told his campaign audiences, “Don’t boo — vote,” and Clinton’s team wants their faithful not to fume, but to fight back.

“People will be watching Cleveland and Donald Trump the next few days and will be wondering, ‘What can I do? What can I do to stop this?'” said David Pepper, the chairman of the Ohio Democratic Party. “And the best thing they can do is to register voters.”

The pro-life group Created Equal is determined to get the Republican National Committee’s attention next week in an effort to include the defunding of Planned Parenthood in its new platform. Every day during next week’s convention, the group will be flying a banner in the Cleveland skies featuring a graphic picture of an aborted baby

THIS IS GETTING REALLY, REALLY TIRESOME
For college students at Case Western Reserve University, a dislike of cops takes precedence over education.

Case Western Reserve University will be closed for business next week. That’s because students can’t handle the presence of cops. Controversy started when the private university agreed to house police officers for the RNC convention

THIS CHUMP IS A STRAIGHT-UP WHITE HUSTLER, CASHING IN ON THE AFFIRMATIVE ACTION BENEFITS OF PEOPLE WHO NEVER SPORTED A BILLY RAY CYRUS-TYPE MULLET LIKE HE DID. HE’S NOTHING MORE THAN A BLADDER FULL OF HOT AIR.

It’s strange that a movement that claims they want to fight injustice peacefully has a spokesman who repeatedly fantasizing about civil wars and uprisings which would lead to death and destruction.

WHY IS THIS DICKHEAD STILL ON FOX?
FROM THE RNC WEBSITE:

PENCE IS A CALM, RATIONAL GROWN-UP. THERE ARE SO FEW OF THOSE IN POLITICS ANYMORE.

Attendees at the Republican convention applauded the police in Cleveland yesterday. That’s the proper way to thank people who put their lives on the line keeping law and order and protecting communities
THEY KNOW WHO HAS THEIR BACK AND WHO DOESN’T

“LALALALALALA I CAN’T HEAR YOU.”

In the fourth video, a Planned Parenthood VP says their clinics need to “have their stories straight” because she “doesn’t want to get called on selling fetal parts across states.” She also says, as have PP execs in previous videos, that abortion procedures are changed to preserve specimens for sale. Later, she laughs and jokes while dissecting a newly dead baby. You can hear the sound of the skull being cracked open as she explains that Planned Parenthood prefers to sell baby body parts individually because it’s more lucrative. 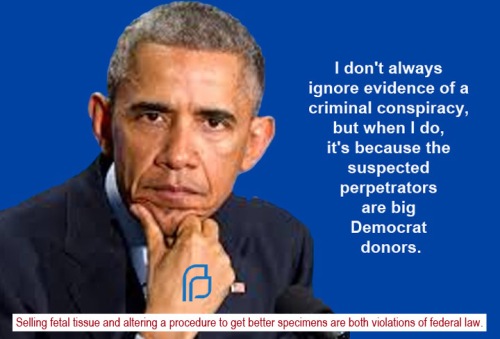 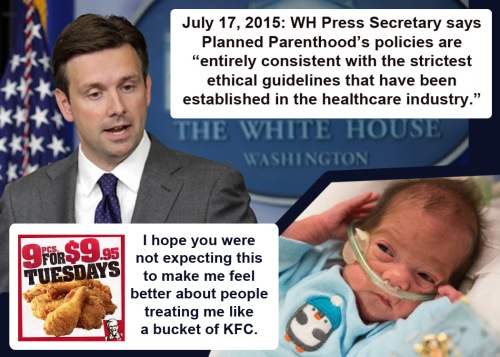 If you are pro-choice, but find it makes you sick to think about people picking through dead baby parts and haggling over prices, maybe you need to rethink your commitment to this particular kind of choice.

July 9, 2015: WH Press Secretary Josh Earnest began today’s presser with a sweeping denunciation of Republicans as RAAAAAAACISTS. Just listen to the first minute of this and keep in mind this is the WHITE HOUSE. 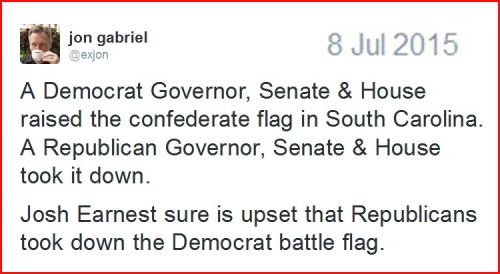 Donald Trump is the individual Earnest cites as the “leading presidential candidate” (huh?) who is a known race-baiter. I googled “Donald Trump race baiter” and got a bunch of hits, all in left-wing rags like HuffPo. The actual quotes that are slammed as “racist” appear to be terrible, horrible, no-good statements of facts about black crime rates and the like. OMG … those RAAAACIST facts! And those RAAACISTS who say them out loud!

Rep. Steve Scalise is the individual Earnest quotes as having said he was “like David Duke without the baggage.” By this, he meant that he supported the same policy ideas as David Duke, but that he didn’t have the same negative feelings about minorities as the former Ku Klux Klan leader. But Josh … really! Don’t let a little thing like CONTEXT get in the way of your slandering the entire GOP … cuz, you know, TOLERANCE. 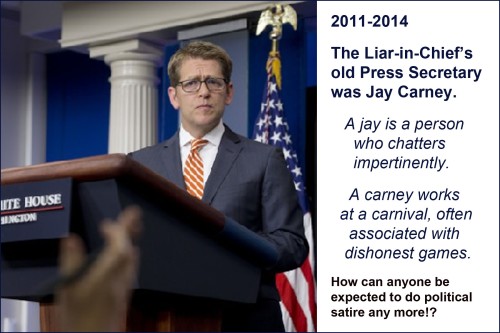 Asked whether he had ever lied to the media, Jay Carney stated, “The answer is no.” That, of course, was a lie. Here are just a few of Carney’s biggest lies: 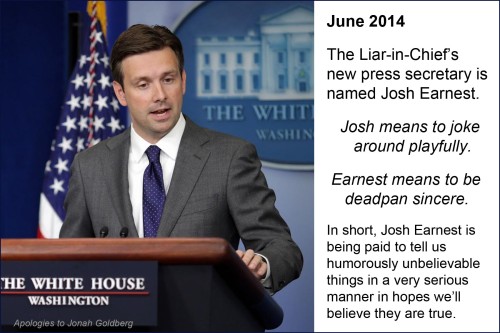 Obama, Translated: Whenever the president talks about himself, flip it so he’s saying the opposite.
By Jonah Goldberg – July 12, 2014
http://www.nationalreview.com/article/382547/obama-translated-jonah-goldberg