This Is the Path We Have Chosen

So the media did its job. It gave Trump millions of dollars in free publicity when there was a contest in the primary. We’ve seen this all too often. Media gives the republican they want as an opponent hugs and kisses until it’s time to turn on them and show where their true loyalties lie. McCain was so delusional he thought the presstitutes really liked him. That was only when he was trashing other republicans… which was often. Trump has drawn a lot of pissed-off patriots to his rallies with his fiery rhetoric and seemingly anti-establishment positions.

I remain firm in my belief that he first ran on a whim and people took him seriously. He says all the right things but offers no concrete plans to do anything about the economy, immigration, or the trampling of our rights. He’s acting like rallies are going to see him through to the end. He sounds tough, but he’s facing a Clinton Machine that attacks with a savagery he’s never encountered before. They’re professionals and they have a lot of experience fighting dirty, with the full support of the media who carry their water.

Trump could be kicking out an attack ad every single day showing how corrupt Hillary is, how hollow her record was as Sec. of State and why he would be better on the economy, terrorism and national security. But sadly, there’s not been one ad. This comes at the same time the Clinton campaign spent $26 million in June alone going after Trump. You’re not dealing with Ted Cruz here Donald, you are going up against the Clinton Machine who will steamroll you if you don’t start fighting back.
He has a staff of around 70 people — compared with nearly 700 for Mrs. Clinton — suggesting only the barest effort toward preparing to contest swing states this fall. And he fired his campaign manager, Corey Lewandowski, on Monday, after concerns among allies and donors about his ability to run a competitive race.

AT LEAST HE HAS HIS PRIORITIES STRAIGHT
The Trump Campaign Spent $208,000 on Hats in May

The Trump campaign, which only has $1.3 million dollars cash-on-hand according to newly released FEC filings, spent $208,000 on hats in May. Hillary Clinton has $42 million cash-on-hand.
Trump also appears to have spent a significant amount of campaign money paying his own businesses and properties

Trump Accuses Jeb Bush of Backing Convention Coup Against Him

Donald Trump on Saturday accused Jeb Bush of mounting a convention coup against him, after reports that Republican delegates who don’t personally support Trump are looking for ways to avoid voting for him this summer.

TRUMP HAS BURNED A LOT OF BRIDGES INCLUDING STATE LEVEL LEADERS THAT HE NEEDS FOR HIS GROUND GAME AND SUPPORT EFFORTS. MOST OF THEM REALLY DON’T LIKE HIM.

Hillary is a fatally flawed candidate that should be facing federal charges. We all know that won’t happen. 70% of the population think she’s a liar and it looks like she’s going to win in a landslide. It seems a billionaire always shows up to clear the way when a Clinton runs for office.

This is simply my personal opinion and is in no way meant to insult any Trump supporters. The beauty of our system is that we can have differing opinions without paying for it with our lives, as is the case in many countries the democrats are fond of mollycoddling.

AG Loretta Lynch: Most Effective Response To Terror Is Compassion, Unity And Love
A MUSLIM WOMAN COMMITTED A MINOR INFRACTION DURING RAMADAN A FEW DAYS AGO. ISIS BASTARDS BEHEADED HER 4 YEAR OLD AND MADE HER DIP HER HANDS IN THE CHILD’S BLOOD. I DON’T THINK LOVE WILL DO MUCH TO THESE BLOODTHIRSTY ANIMALS.

Lynch said the Department of Justice stood in solidarity with the LGBT community “in the light” following a Muslim terrorist’s massacre of 49 people at a gay nightclub last week.

Islamists Attack Christian Village Near Alexandria – Torch 80 Homes
A mob of over a thousand Islamic extremists attacked a Christian village near Alexandria setting fire to over 80 homes.
The Muslims were outraged over a rumor that a Coptic Christian man was turning his home into a church.

NOTHING TO SEE HERE,FOLKS… WE ALL KNOW WHO THE REAL ENEMY IS, DON’T WE?

The opposition response to the president’s State of the Union is ordinarily meant to rebut what the president says. Not this time. They chose instead to attack the current front-runner for the nomination of their party because of his apparent dislike of the illegal vermin invading our borders to crush our economy by lapping up benefits that should go to Americans.

Meet Governor Nikki Haley of South Carolina.The daughter of Sikhs and a rising star amongst the GOP elite.

South Carolina Gov. Nikki Haley says she would consider being the vice presidential candidate for the Republican Party this year.

The rising political star revealed that she is open to the possibility in an appearance on NBC News’ “Today” show Wednesday, a day after delivering the GOP response to President Obama’s final State of the Union address.

“Proud of my friend @nikkihaley for delivering a positive & uplifting response to Pres. Obama’s #SOTU. Clear vision for a brighter future,” he tweeted.
https://www.yahoo.com/politics/rising-star-nikki-haley-says-she-is-open-to-160906818.html

The celebration by Republican elites was instant, and so was the backlash on the far right.

South Carolina Gov. Nikki Haley, the youthful daughter of Indian immigrants, had delivered a sunny and inclusive Republican response to President Obama’s State of the Union address that stood as an unmistakable counter to her party’s two presidential front-runners.
https://www.washingtonpost.com/politics/haleys-plea-for-tolerance-draws-cheers-and-jeers-revealing-gop-divide/2016/01/13/32c597d6-ba16-11e5-829c-26ffb874a18d_story.html

A little bit questionable, but on balance I haven’t had a whole lot of problems with her. But, boy, last night her response? I think it’s proof and it’s an example of so much. For one thing, it’s almost absolute proof of what I have been saying for last couple years now, that the Republican Party’s trying to drive conservatives out of the party. But I think it’s more than that. It’s certainly that, but her speech last night sort of expanded the theme of who is and who isn’t qualified to be a Republican, and the Republican Party is still anti-conservative
http://www.rushlimbaugh.com/daily/2016/01/13/what_the_nikki_haley_speech_means 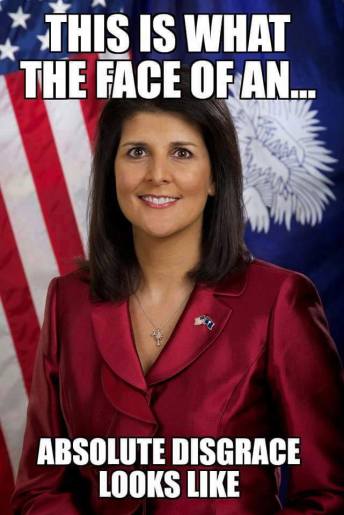 FRANK LUNTZ IS A WALKING BALL OF PHLEGM. THIS IS HIS STUPID FOCUS GROUP AFTER THE SOTU.
IT’S FOUR MINUTES, BUT THE MONEY SHOT IS AT THE 1:57 MARK WHEN NEARLY EVERYBODY IN HIS HAND-PICKED PACK OF STOOGES BLAMES THE REPUBLICANS FOR NOT KISSING OBAMA’S ASS AND ACCEPTING ALL THE BLAME.

PLEASE BE PATIENT…THIS BREVITY THING IS NEW TO ME

You’ve probably heard about it by now. You may have even seen parts of it. Last night’s debate was as pathetic a display of moderator arrogance and outright venality as has ever been my fortune to witness. I don’t even think they had everything planned, it’s just when they started they couldn’t help themselves. I may do a separate post with the entire debacle broken down into pieces. For now I’ll just post short bites, some of which you have no doubt already heard.

TED CRUZ GOT THINGS STARTED. IT WAS ALSO THE HIGHEST RESPONSE FRANK DUNTZ HAS EVER GOTTEN FROM ONE OF HIS INFAMOUS FOCUS GROUPS.

Ted Cruz Slams the Media During GOP Debate
“The questions that have been asked so far in this debate illustrate why the American people don’t trust the media,” said the U.S. senator from Texas.

Christie: We Have $19 Trillion In Debt | GOP Debate | CNBC

THE JEBSTER GOES AFTER RUBIO…GETS HIS ASS KICKED

LISTEN TO THIS ARROGANT SLUT TRY TO DEBATE DR. CARSON

Chris Christie: Democrats Are Running A Socialist, An Isolationist, And A Pessimist

Huckabee: I Fought the Clintons, Won, and “Lived to Tell About It”

Kasich: We Are On The Verge Of Picking Someone That Can’t Do This Job

CNBC’s John Harwood to Trump: Are You Proposing A ‘Comic Book Version of a Presidency’?
IMAGINE HIM ASKING KING BARACK THIS QUESTION

Hannity on CNBC Debate: “This Is Going to Go Down in History as REALLY BAD NIGHT for the Media” (Video)

CHECK OUT RUBIO ON BEING ABSENT FOR SENATE VOTES

SHOCKER: CNBC Moderator John Harwood Proven To Be A Liar…

Under Barack Obama the Middle Class in America has been under constant assault.

HOPEFULLY YOU HAD MISSED A FEW OF THESE. ENJOY

Full confession: I was up late trying to watch the canine and equine performance and didn’t quite make it. There’s so much to cover I’m going to break it into two parts. Most of you have seen some or all of the debate, others may have a life and actually missed it. This is the entire nearly three hour show for the truly masochistic and a lot of short segments with highlights broken down into very short soundbites. If you only have a short time to browse I urge you to watch the exchange between The Donald and Carly Fiorina, who was absolutely amazing. Her comment on Iran and Planned Parenthood was the absolute best.

This got the highst meter rating:
She butchers him like a trussed-up cow

RAND PAUL AND ONE OF THE AMNESTY TWINS, JEB OR MARCO, I DON’T RECALL WHICH, WERE DISCUSSING DRUG TREATMENT. CARLY SHUT THE WHOLE TOPIC DOWN WHEN SHE REVEALED SOMETHING I NEVER KNEW

THIS BROUGHT THE HOUSE DOWN…DON’T MESS WITH W!!!

Bush: 40 years ago I smoked marijuana, I admit it…

THIS WAS OUTSTANDING FROM CHRISTIE

Fiorina: I wouldn’t change the 10 or 20 dollar bill

Trump, Bush square off over casinos in Florida

Walker to Trump: ‘We don’t need an apprentice in the White House

Bush: Trump should apologize to my wife

Donald Trump: ‘Rand Paul should not be on this stage…’
THE DEBATE HADN’T EVEN STARTED BEFORE HE STARTED TAKING SHOTS

Christie: ‘More than just a wall’ needed to sec…

IN CASE YOU MISSED IT
Fiorina: Shame on us if we don’t force Obama to veto Planned Parenthood

In case you were interested in anything,here’s some of the video and related commentary.

Cruz: “The Next 20 Months Are Going to Be Very Dangerous”

You know, prior presidents have been repudiated [and] they’ve reacted with contrition. [P]resident Obama, instead, reacted with anger and defiance.”

Scott Walker Is Trying to Woo CPAC. And It’s Working.
http://cdn-media.nationaljournal.com/?controllerName=image&action=get&id=44859&format=nj2013_10_columns
This is from National Journal,so take it for what it is.

The Wisconsin governor continued his pivot toward the right in his CPAC speech Thursday, and the crowd loved it.
“Here in America there is a reason we celebrate the Fourth of July and not April 15th,” Walker said. “Because in America, we celebrate our independence from the government, not our dependence on it.”

Walker got an unexpected opportunity to flex his legendary anti-union muscles on stage when protesters interrupted his speech by shouting from the crowd.

“Those voices cannot drown out the millions of Americans who want us to stand up for the hardworking taxpayers,” Walker said to the protesters.

http://www.nationaljournal.com/twenty-sixteen/scott-walker-is-trying-to-woo-cpac-and-it-s-working-20150226
Scott Walker at CPAC: If I Can Take On 100,000 Protesters, I Can Take on ISIS

“At this time, if you are able, I would like to ask all of our military men and women to please rise and allow us to show our deep gratitude and appreciation,” Ernst had just said.

Across the room some three dozen veterans rose, and applause broke out
http://townhall.com/tipsheet/sarahjeanseman/2015/02/26/joni-ernst-honors-military-veterans-at-cpac-n1962844

JEB BUSH BOOED at CPAC – Students Walk Out In Protest!

‘I am a GOD-loving, BIBLE-believing, GUN-toting Capitalist!’ – Phil Robertson FULL SPEECH from CPAC!