I googled “SAPS Clinton” and found a story at Fox News, plus some mentions in conservative blogs. This is like the Gosnell trial; the Left Stream Media will cover it at gun point … maybe … and even then they’ll manage to make it sound like a right-wing conspiracy.

Former CIA Director David Petraeus was prosecuted by the Justice Department for sharing intelligence from special access programs (SAPS) with his mistress, Paula Broadwell. The retired four-star general pleaded guilty to a misdemeanor in April 2015. He was sentenced to two years of probation and ordered to pay a $100,000 fine.

Comments Off on Hillary’s gross negligence

Consequences and the lack thereof 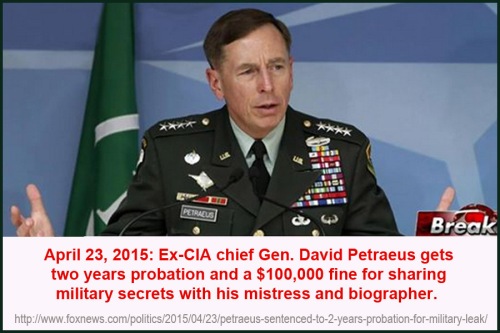 Petraeus’ story convinces me even more that RINOs like those who just flipped and voted to confirm the contemptible Loretta Lynch as AG aren’t willingly complicit; they are being blackmailed. I mean … who can look at Boehner’s face here and believe he WANTS to cooperate with Obamacrats?

I remember watching bewildered as Petraeus rolled over for Obama. But it seemed like one day he got told to do something that was a bridge too far for this flawed, but fundamentally honorable and patriotic man.  And then, suddenly, all the dirt about his mistress was public knowledge, his reputation was ruined, and he was indicted.

Meanwhile, corruptocrats like Harry Reid and Hillary Clinton skate along, committing felonies, lying, stealing, ruining reputations, killing and getting people killed, without consequences.  It’s not even a secret!  But it seems as if those in the media and the GOP who have the clout to do something about them just do … nothing.

Kevin DuJan always said it was SOP for Democrats to keep dirt files on everybody … Democrats and Republicans … and that so long as you did what the Democrats wanted, the dirt stayed in the vault. It is the only sensible explanation for why some of these people have done such absurd things.

Remember how Hillary Clinton was an out-spoken supporter of the Iraq War, then suddenly she was claiming Bush had lied (which he hadn’t) and the Iraq War was eeeeeeeeevil? And remember how Nancy Pelosi, who had witnessed a demonstration of waterboarding and voted to approve its use on three Gitmo detainees, was suddenly screaming that the horrible the Bush administration was waterboarding people?

Come on! I realize these people aren’t rocket scientists, but even they aren’t that dumb. Okay, Maxine Waters probably is that dumb, but Clinton, Pelosi and Reid aren’t. Corrupt, yes. But not flat out, brain dead, islands-can-tip-over stupid. Harry Reid is perfectly well aware that his statements on the Senate floor are recorded, yet he says something one day and the very next week says he never said that? And he doesn’t get censured? And the media doesn’t crucify him?  Puh-leeze.

I get a couple lessons out of all this. One is that while we elected a Republican majority, most of the newbies are too junior to have much clout and a majority of the old guard have Obamacrat leashes on their backbones. The other lesson is that those Republicans who do have clout and who are standing up to the Obamacrat machine are as squeaky clean as Mitt Romney (who pays his taxes) and Sarah Palin (who buys her own clothes).

As a military mom, NOTHING about Obamacrats makes me more angry than the horrible way they treat our troops. A close second is how SHORT their damn memories are about all the vile things they’ve done in the past. The graphic below is the first in a series I did in 2011* about Iraq containing truths that need to be remembered accurately. I loaded it to a new Facebook album. It’s public, so you should be able to see it and share it even if you don’t have a Facebook account.

*It used to be at Chrissy’s Site Bites, where I had more than 3,000 graphics. Webshots has been turned into a cloud storage site and is no longer hosting graphics.

Comments Off on Democrat Treachery ca 2011

The Bad Guys Come In 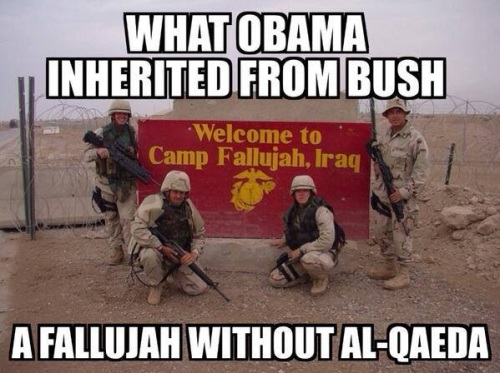 Charles Krauthammer on “The O’Reilly Factor”

“We were in a position to conclude a strategic agreement where Iraq would have been our ally. [President Obama] had three years to do that and he failed…

“The fact is we’ve given Iraqi air space over to Iran. We’ve given essentially the running of Iraq over to Iran, because when we leave a place and we create a vacuum the bad guys come in.”

By wasting the sacrifices our troops made in Iraq, Obama has betrayed us in the worst possible way.

Comments Off on The Bad Guys Come In

ABC is reporting that they have obtained copies of twelve sequential White House emails that PROVE the White House edited out politically problematic information from the Benghazi talking points.

First is the original draft composed by the CIA.

Second is the draft after about ten revisions from within the Obama Administration. 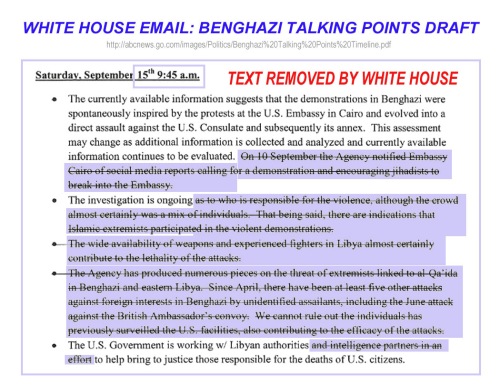 Third is the last of at least TEN drafts coordinated by the Obama White House and the Clinton State Department that Obama’s Press Secretary Jay Carney falsely claimed was the ONLY change made by them.

The final, heavily edited version was distributed to Congress and Susan Rice before she appeared on five talk shows the Sunday after the attack.

What we know for sure:

The Left-Stream Media may be waking up from their Obama Kool-aid stupor. This surprising report from The New Yorker:

“For a long time, it seemed like the idea of a coverup was just a Republican obsession. But now there is something to it.”

History tells us that after there was no more of the known world left to conquer,Alexander the Great wept.It is not beyond reason to think Obastard likewise felt something of a tinge (someone bereft of compassion has no capacity for sorrow or tears) when he came to the reality that he could no longer do the only thing in life he was ever any good at…campaigning. He will spend the next four years preening for an adoring mob and exacting revenge on the people of this country who are everything he is not: hard-working,honest,independent, spirit-filled families that endure what comes and attach no blame for their circumstance.They raise their children in the ideal that nothing of worth ever comes easy or without effort.

In all likelihood we will,indeed,careen over the “fiscal cliff” because that’s precisely what he wants.He doubled down on his demand for tax increases and now has $1.6 trillion as a target.He knows the republicans would be committing political suicide by surrendering to this magnitude of fiscal thievery and,of course,the resultant maelstrom will be blamed entirely on the GOP by his loyal bootlickers in the media. There will be multitudes of illegal,immoral, unconstitutional acts perpetrated by the left and the bastard’s overt duplicity will ,of course,be ignored or dismissed out of hand.

The regime knew of Gen. Petraeus’ trysts for some time and held it over his head like the sword of Damocles.He foolishly thought if he gave in to their extortion they would cover for him.He served his country with honor,but he doesn’t know shit about liberals.He is testifying today behind closed doors and will ‘revise’ his remarks about the Benghazi murders being a protest.I know there are several gold-digging bimbos involved,but I don’t care enough to get into the details.All I know  is that the administration allowed the affair to go on and jeopardize national security.

The Palestinian killers were elated that Brother Hussein will be around for the next few years so they can go forward with their plans to attack Israel with impunity.America will stand by and watch.Israel knows it too,and unlike what we’re stuck with,they have a leader who really does love his country and is willing to kill those who would destroy her.Would that we had a leader with an iota of the stuff Mr. Netanyahu is made of.Unfortunately we’re stuck with what we got.