And the Oscar for pointless movie reviews goes to … – UPDATED

… the New Republic review of American Sniper which the reviewer admits he didn’t watch. 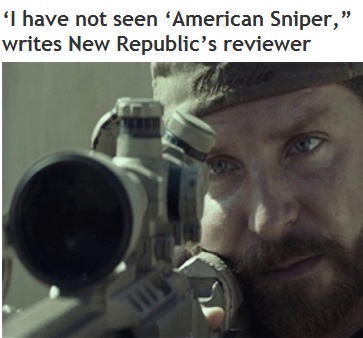 THIS is worth reading!

“Make no mistake: Looking through a magnified rifle scope and killing another human being is a difficult job. It’s a burden many snipers bear long after their service is completed. But contrary to what many believe, snipers are not mindless murderers or killing machines. They’re intensely dedicated professionals willing to do a very difficult, extremely dangerous job with the goal of protecting others.”

I added some pics to my Empty Chair album @ http://news.webshots.com/album/579815743nHqDwD

Jackie Mason, widely regarding as one of the greatest stand up comedians of all time, dubbed Eastwood’s RNC performance “absolutely brilliant” and “perfectly conceived.”

“I thought it was absolutely brilliant and all these commentators that are fiddling with it sound like idiots to me. They are trying to intellectualize it, interpreting it because it was too much comedy, it was inappropriate, it was insulting, it was bad taste. And these people are absolutely nuts.”

“And this was so artfully, perfectly conceived.”

“His purpose was to entertain the audience”

“Each one of his lines had a huge insane laugh. The audience loved every minute of it.”

“If you read it you’ll find every joke was exactly to the point, very sharp commentary.”

Joe Biden: A grin with a body behind it

Clint Eastwood got in some zingers [:54]

UPDATE: I made myself a sandwich, then sat down to watch speeches. Eastwood’s speech was funny … but so was my screen! I had to take a screenshot to share with all y’all.

Comments Off on Joe Biden: A grin with a body behind it