Please don’t be put off by the fact the article below was written by a left-wing feminist and published in TIME. It’s worth reading in full.

Put the Sex Back in Sex Ed by Camille Paglia
From TIME Opinion: Education – March 13, 2014

The refusal by public schools’ sex-education programs to acknowledge gender differences is betraying both boys and girls. The genders should be separated for sex counseling. It is absurd to avoid the harsh reality that boys have less to lose from casual serial sex than do girls, who risk pregnancy and whose future fertility can be compromised by disease. Boys need lessons in basic ethics and moral reasoning about sex (for example, not taking advantage of intoxicated dates), while girls must learn to distinguish sexual compliance from popularity.

Above all, girls need life-planning advice. Too often, sex education defines pregnancy as a pathology, for which the cure is abortion. Adolescent girls must think deeply about their ultimate aims and desires. If they want both children and a career, they should decide whether to have children early or late. There are pros, cons and trade-offs for each choice.

H/t my niece who sent me the link

Surprising support from the other side of the aisle

Camille Paglia is an atheist, a Democrat, a professor and a social critic. You’d think you could predict her reaction here, but you’d be wrong. 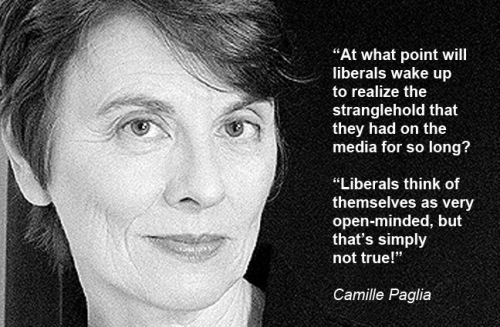 “Liberalism has sadly become a knee-jerk ideology, with people barricaded in their comfortable little cells. They think that their views are the only rational ones, and everyone else is not only evil but financed by the Koch brothers. It’s so simplistic!”

“Now let me give you a recent example of the persisting insularity of liberal thought in the media,” she said. “When the first secret Planned Parenthood video was released in mid-July, anyone who looks only at liberal media was kept totally in the dark about it, even after the second video was released.”

“It was a huge and disturbing story,” she continued, “but there was total silence in the liberal media. That kind of censorship was shockingly unprofessional. The liberal major media were trying to bury the story by ignoring it.”

“But here’s my point,” she concluded. “It is everyone’s obligation, whatever your political views, to look at both liberal and conservative news sources every single day. You need a full range of viewpoints to understand what is going on in the world.

Paglia also expressed her love for The Drudge Report and her deep respect for religion.

“All the great world religions contain a complex system of beliefs regarding the nature of the universe and human life that is far more profound than anything that liberalism has produced.  … I find it completely hypocritical for people in academe or the media to demand understanding of Muslim beliefs and yet be so derisive and dismissive of the devout Christian beliefs of Southern conservatives.”