More Dirt From the Obama Years

Judicial Watch has uncovered evidence that Obama’s Department of Justice sued big companies, then offered them the opportunity to settle if they donated to one of three third-party, non-victims of the companies’ alleged misdeeds.

So far, at least $3 billion in payments to La Raza, the National Urban League, and the National Community Reinvestment Coalition have been uncovered, Judicial Watch said.

During Obama’s presidency, federal agencies also gave more than $89.5 million to these three organizations, which also, surprise surprise NOT, received millions from the likes of billionaire George Soros’ Open Society Foundation (OSF), the Ford Foundation, and the Bill and Melinda Gates Foundation.

Leaked emails from OSF have revealed that, during Obama’s presidency, George Soros advised then-Secretary of State Hillary Clinton on foreign policy in Albania. He also gave at least $10.5 million to Clinton’s 2016 presidential campaign.

Judicial Watch has filed a Freedom of Information Act lawsuit demanding DOJ records and intends to pursue the matter.

Major media have yet to cover any of this.

Comments Off on More Dirt From the Obama Years

There’s so much stuff today it would not be possible to post even half of it. Using this media,visitors can pick and choose what to watch. Not a lot of text, no brain drain. Enjoy.

Politico’s Glenn Thrush: “No Question” There Is A Racial Component To Trump Supporters

Morning Joke was on it today
Scarborough Mercilessly Mocks Olbermann: Delusions of Talking Nazi Tomatoes
Some feuds die hard. Joe Scarborough and Keith Olbermann have one going back to at least 2008, with another flare-up in 2012. Scarborough’s got the bigger mic now, and he wielded it on today’s Morning Joe to mercilessly mock Olbermann as someone suffering from delusions of Nazi tomatoes that talk to him.

DON’T BOTHER… THIS IS THE WHOLE THING… ABOUT AN HOUR
Donald Trump Tells Paul Ryan at Wisconsin Rally: ‘We’re Going to Build the Wall Paul!”

Trump Mocks Hillary in Wisconsin: “I Offered Her 5 Cents on the Dollar” for Her Cancelled Fireworks
THAT’S GONNA LEAVE A MARK

Jim Brown on Donald Trump: He has “my admiration”

#32 WAS VERY RESPECTFUL OF THE PRESIDENT-ELECT
Bill Gates just met with Trump at Trump Tower Look what he said
GATES LOOKS FORWARD TO WORKING WITH HIM, NOT JUST KISS HIS RING… BILLIONAIRES DON’T DO THAT

THEY’RE FINISHED!! TRUMP TEAM ASKS FOR IDENTITIES OF DOE EMPLOYEES WORKING ON CLIMATE CHANGE HOAX
THEY’RE NOT GIVING UP ANY INFORMATION. THEY ALL KNOW THEY’LL SOON BE UNEMPLOYED

George Stephanopoulos’ Wife Tells ‘The View’ Their Daughters Are Scared After Election
THEIR 11 AND 14 YEAR OLD DAUGHTERS ARE AFRAID THEY MIGHT NOT BE ABLE TO GET AN ABORTION. WHAT A FINE EXAMPLE THEY’RE SETTING

A COUPLE GOLDEN OLDIES FROM DOUG FROM UPLAND
DFU SING-ALONG: Harry Reid – No Black Man for the Senate

BLAGO IS STILL IN PRISON, HOPING OBAMA WILL PARDON HIM

Comments Off on Video Extravaganza

Bill Gates Is Full of S*it

Chcken s*it, that is.

Keep CHICKENS if you want a better life, billionaire Bill Gates tells poor people
Super-rich Microsoft founder claims ‘anyone living in extreme poverty is better off if they have chickens’ 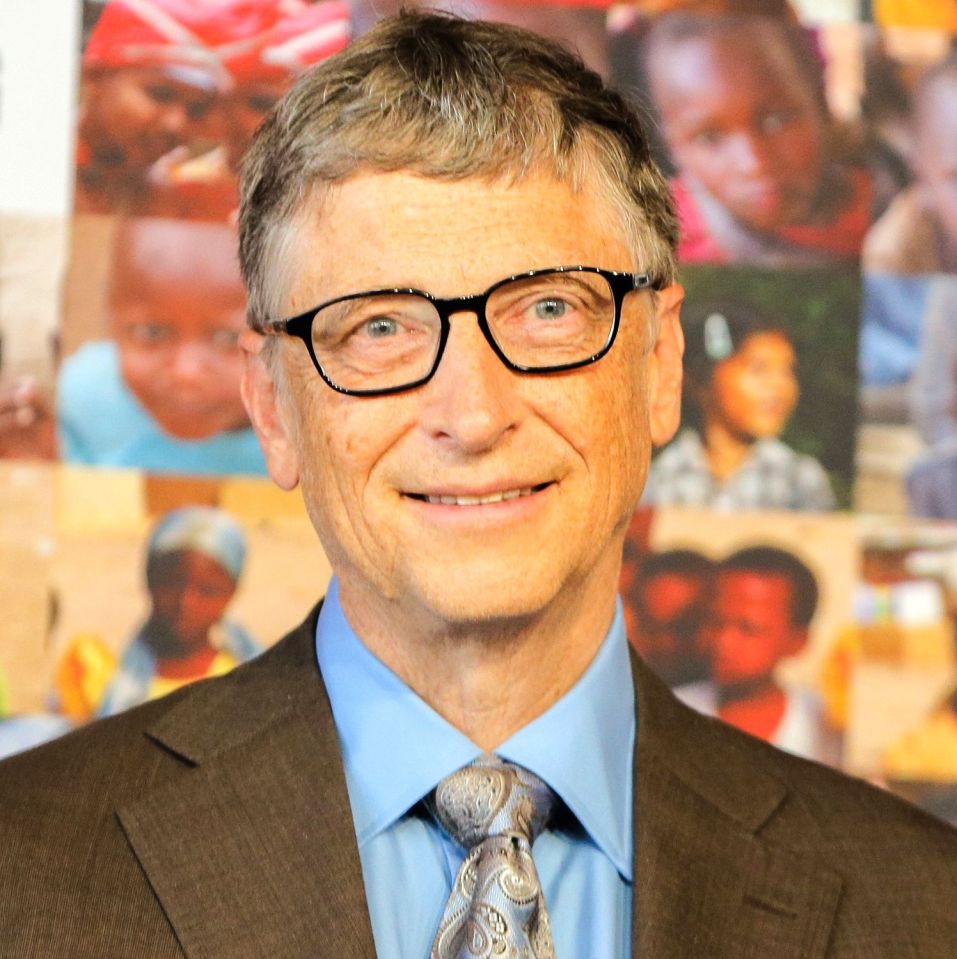 “I’ve met many people in poor countries who raise chickens, and I have learned a lot about the ins and outs of owning these birds,” he wrote.

“It’s pretty clear to me that just about anyone who’s living in extreme poverty is better off if they have chickens.” 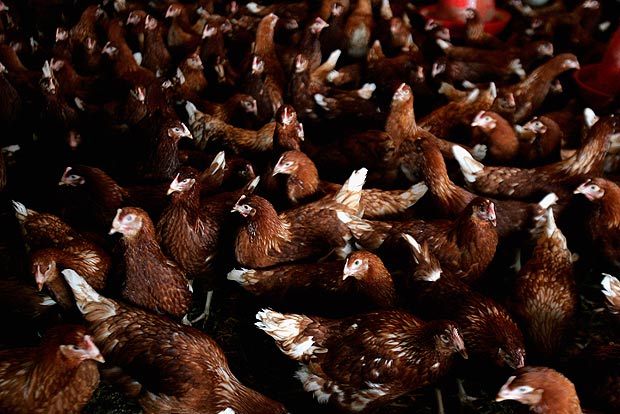 Growing up on a farm, the first chore I can remember was throwing scratch to the chickens. Scratch is a term for material like eggshell fragments that they store in their gizzards to help grind up grain, bugs, whatever they eat. They’re not particular when it comes to diet. Granddad used to determine if eggs were fertile by holding them to a candle. I was never sure exactly how. I can tell you in order to raise chicks you need a rooster (makes sense.) From what I read, one male per 15-20 hens is about the limit. They’re not studs.

We had what we called ‘sitting hens’ that would incubate eggs until they hatched. Grandpa built nesting boxes, like P.O. boxes
where they laid their eggs. I was about six when I started gathering. Most hens would let you reach under them and take the eggs. We had one hen that was extremely belligerent. She’d ruffle her neck feathers and dare me to try to put my hand under her. One of the worst parts of the job was taking the eggs in the basement and using sandpaper to scrape the poop off the eggs, because they weren’t always particular where they left them. Anybody who has had farm-fresh eggs or eaten chickens raised in a barnyard on natural feed can tell you there is no comparison to what is available in stores.

The bottom line is Gates should stick to making millions of dollars a day. It’s not as easy to raise chickens as one might think. People who are starving aren’t particularly interested in poultry husbandry. They eat whatever they can find. Ask Venezuelans.

Chickens like to eat eggs as much as we do. Most egg-eaters learn on broken eggs and then begin to break eggs themselves. Chickens are opportunists and will pick at whatever looks edible. If you clean up broken eggs immediately and throw out any “eggy” straw or shavings, you can prevent egg-eating. A chicken that learns this habit can’t be cured, and others may follow her lead. You don’t want the chickens eating your eggs—you want them yourself!

A cooking tip: To make deviled eggs, use week-old or older eggs, not this morning’s. The shells of really fresh eggs stick rather than peel cleanly.

Farm chickens can live 4 to 7 years and lay eggs for most of that time. Every year they go “off-lay” (stop laying eggs) for several months. This happens over the winter, when there’s too little daylight to trigger egg-laying. They’ll begin again in the spring.
http://www.almanac.com/blog/raising-chickens/raising-chickens-101-collecting-cleaning-and-storing-chicken-eggs

THIS IS A RHODE ISLAND RED

THE WHITE CHICKEN IS A LEGHORN,THE MOST COMMON BREED.
THE ROOSTER HAS A SPUR ON IT’S HEEL,MUCH LIKE A TURKEY. THESE ARE WHAT WE RAISED. RAISING ANY KIND OF LIVESTOCK TAKES A LOT OF KNOWLEDGE TO BE SUCCESSFUL.
(AND YOU THOUGHT YOU WEREN’T GOING TO LEARN ANYTHING TODAY.)

ACTUALLY,YOU CAN CATCH A CHICKEN. WE USED A COAT HANGER STRAIGHTENED OUT WITH A CROOK AT THE END LIKE A SHEPHERD’S STAFF TO HOOK A LEG AS THEY RUN FOR THEIR LIVES. WITHOUT IT, YOU HAVE NO PRAYER OF CATCHING ONE.