The drug – Budesonide – has been used by thousands of people, including kids, for asthma and other problems.

Even better, it is inexpensive and can be administered at home.

COVID-19: There is an interesting article at Mercator that is worth reading in full. Samplings provided to intrigue you to do it. 🙂

“Two competing narratives are occurring: Continue to open the economy up or, as cases rise, shut it down. Park your politics for a moment and explore the ancient leadership lessons represented in the battle between these two men–the leader and the expert. …

“There is a seductive appeal of hedgehogs like Dr. Fauci. They know something really well and they are so good at what they do. But, leaders, especially Presidents, must be careful when dealing with hedgehogs, not to confuse the response the experts want (shut everything down!) with what the country needs (personal accountability, disciplined self selection, targeted quarantines with a keen focus on the hot spots like major cities, and especially protection of at-risk populations and our medical personnel, and so on).

“To understand what this means for leaders, return to the lesson in the original story of the Fox and the Hedgehog in the ancient Greek fable by Aesop written 16 centuries before the birth of Jesus Christ:

A Fox swimming across a rapid river was carried by the force of the current into a very deep ravine, where he lay for a long time very much bruised, sick, and unable to move. A swarm of hungry blood sucking flies settled upon him. A Hedgehog, passing by, saw his anguish and inquired if he should drive away the flies that were tormenting him.

“By no means,” replied the Fox, “pray do not molest them.” “How is this?” said the Hedgehog, “do you not want to be rid of them?” “No,” returned the Fox, “for these flies which you see are full of blood, and sting me but little, and if you rid me of these which are already satiated, others more hungry will come in their place, and will drink up all the blood I have left.”

“The hedgehog sees the problem and wants to fix it. But the fox is the opposite, embracing the complexity of the situation without being overwhelmed by it. The fox knows he can’t just brush off the flies causing him pain; he must avoid expediency and choose wisely because there are significant long-term consequences beyond the pain of the moment.”

Senator Tammy Duckworth of Illinois is emerging as one of the leading vice presidential contenders.

MEDIA MALPRACTICE: [5:40] – Media assures us that Jesus wasn’t perfect and that Donald Trump is a serial killer who will go to Hell.

Also, we should not listen to Republicans blaming the sharp rise in crime on Democrats jumping aboard the “Defund the Police” bandwagon.

“CLEARLY, the rise in crime is all about states starting to reopen after the COVID-19 quarantine.”

DEFUND POLICE: [2.17] – A group in Norman, Oklahoma is protesting the city council’s decision to drastically cut police funding. They have a month to get enough signatures on their petition to get the yea voters removed from the city council. 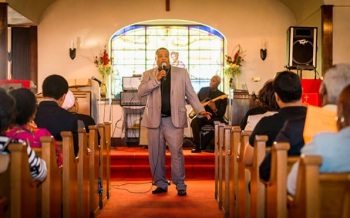 CLICK [2:12] to see them harass a woman trying to take her little ones into the service. Then, they chant and scream “Save those kids.” Uhhhhhhh … pretty sure that’s what the Gospel is all about.

CLICK [1:58] to see a Caucasian BLM supporter repeatedly and forcefully punch a black member of the church in the head.

BLM protesters told congregants the church was “going up in flames tonight” and screamed that “Jesus doesn’t love you.“

Another video shows a Caucasian female apparently casting a spell in front of the church.

Unlike Charlottesville, or any violence from the right, this killing was reported so quietly that barely anyone even noticed.

Back then, when he still had all his marbles and the country wasn’t facing such dire problems.

Yet Democrats said he wasn’t the best candidate.

Why on Earth do Democrats think he is fit to lead NOW?

GRAMMY NOTES: I was just chatting on the phone with Mama Buzz. Bootz came into the room, shrieking about an emergency.

His stuffy’s nose had come off.

I really love watching my eldest parent! [Photo is from her garden.]