Trump’s full, anti-Marxist Mount Rushmore speech [1:46:18] – There is a trascript at the link. 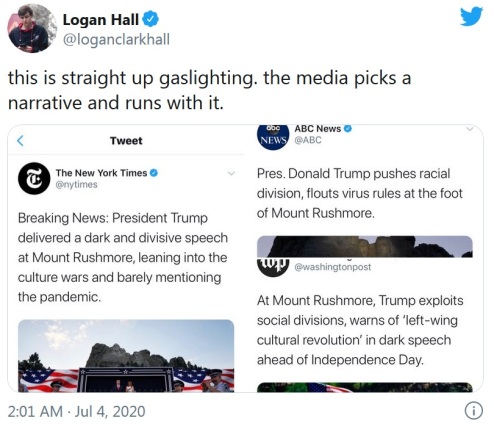 MEDIA MALPRACTICE: The Slime Stream Media got the memo. Trump’s fourth of July speech was “dark”, “divisive”, and, you know, RAAACIST.

CNN: “Trump doubles down on divisive messaging in speech to honor Independence Day”

“Obviously, at least to anyone who heard or read the speech without their Trump Derangement cranked up to fifty-eleven, the president did just the opposite.” – Fuzzy Slippers

“We ask the Times, who declared that war? Who decided that our country’s history is not something to honor, but rather a dark stain on our nation’s conscience?

“Which is more divisive? Tearing down our nation’s heroes and monuments, demeaning the accomplishments of a great country, casting patriotic Americans as relics from a bygone era, painting the United States as profoundly racist … or railing against these things, as President Trump did at Mount Rushmore?”

Comments Off on Mount Rushmore speech