In order to prevent even a single future case of police malfeasance, liberals are now demanding to “defund the police” (which essentially means cutting training budgets, which won’t give us better cops) or getting rid of the police entirely and replacing them with (wait for it!) unarmed Rapid Response Social Workers.

We’re not exactly sure how this would work. Would a social worker visit a crime in progress and attempt to disarm the perp with a forceful show of empathy? Or ask a rapist to stop pumping for a moment to consider what his victim’s feelings must be? Or perhaps thwart a bank robbery by pointing out to the bandits that, in the end, money can’t really buy happiness?

If attempted, we predict that this bold new initiative could be very effective in causing an uptick of rapes, murders, and robberies of social workers. Not to mention getting their “rapid response” electric cars stolen.

Realistically, all these social workers could really do is show up at crime scenes after the fact, and help the victims and survivors (if any) process the experience in emotionally healthy ways that don’t in any way denigrate those who have been forced into crime by unfortunate circumstances and societal injustice.

Still, we want to be fair about giving this new system a chance. So we suggest that the first team of rapid response social workers be deployed to Chicago to clean up that pesky “inner city black genocide” thing. Because in those mean streets, there are clearly a lot of killers who desperately need a hug.

Comments Off on Stilton on Defunding Police

The theatrical side of much Leftist activist can be amusing, such as when climate change activists dress up as fruits and vegetables. Or it can be absurd, such as when men don pink pussy hats.

We saw it happen on January 18, 2019, when Native American activist Nathan Phillips targeted innocent teenagers, then pushed out the carefully cropped photos and video to gin up outrage at his targets.

The students received death threats and the Covington Catholic High School temporarily closed due to fears for its students’ safety.

CLICK to see the 33 second video Reuters pushed out of the “innocent” old man that meanie pants Buffalo police had “brutally” shoved to the ground.

As with the Covington kids, the immediate result was devastating for the old man’s victims. The police officers were charged with assault and suspended from the force.

But Martin Gugino is no innocent. He’s a hard-left activist who hates cops and who had been asked repeatedly to leave the area for trying to incite the crowd.

Footage has emerged showing Gugino hanging around with activists and boasting that he’s looking “for fun.” The shocked young man to whom he confided this said, “I think he’s looking to get punched in the face. That’s what it is.”

People who have been carefully examining footage of Gugino’s interactions with the police note the peculiarly graceful, staged way in which he fell. Others suggest the blood looks fake as well.

The Buffalo police force certainly believes that the two arrested officers were the victims of a set-up. Fifty-seven of them have resigned from the emergency response team.

Comments Off on Leftist Activism 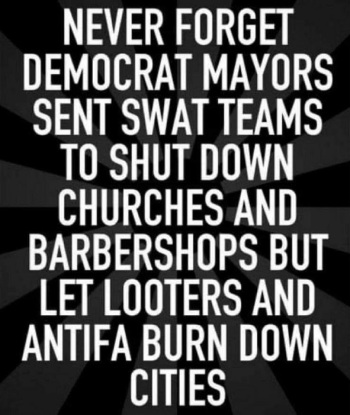 DO BLACK LIVES REALLY MATTER?: George Floyd was high as a kite when he was restrained.

The coroner said that, while the restraint had probably contributed to his death, what really killed him was the effect of the drugs on his pre-existing heart condition.

The Left has used this one unfortunate, but probably self-inflicted death, to go completely crazy. While supposedly protesting racism and violence, their far-from-peaceful protests have killed at least four black men and one biracial women.

Meanwhile, two black women were arrested in New York City for peacefully protesting outside an abortion clinic where many black babies are killed every single week.

CLICK to watch a heartbreaking report about how little Leftists actually care about black lives [2:59].

END_OF_DOCUMENT_TOKEN_TO_BE_REPLACED

If we’re going to claim the moral high ground, we should avoid automatically believing in and forwarding stuff that isn’t true.

FAKE NEWS: Rioters set a children’s hospital on fire. The fire in the photo occurred in an empty apartment complex about a mile away from the Nationwide Children’s Hospital.

FALSE: “The Democrat mayor of DC refused to send backup for the Secret Service.” The DC Police and the Park Police were there, coordinating with Secret Service.

QUESTIONABLE: “The Army General took over as Governor which is protocol and sent back up. AG Barr also sent riot teams. There is still a viable threat and more is planned for Saturday.” I couldn’t find anything about these statements, though I did find reports that the National Guard had arrived in DC in force.

PROBABLY FALSE: “In the meantime, the DC Mayor is demanding the fence around the WH be removed.” I found no evidence that she has said anything about the fence.

MOSTLY FALSE: “The DC Mayor has evicted the National Guard from their hotel rooms to make room for BLM protestors.” Two hundred National Guardsmen were evicted from a particular hotel after a dispute about who would be paying for the rooms. They are now housed elsewhere.

Comments Off on Reality Check

Race hustlers don’t want you to know this, because they can’t gin up power or money for themselves by caring about modern-day slaves.

Of all the tragic facts about the history of slavery, the most astonishing to an American today is that, although slavery was a worldwide institution for thousands of years, nowhere in the world was slavery a controversial issue prior to the 18th century. People of every race and color were enslaved – and enslaved others. White people were still being bought and sold as slaves in the Ottoman Empire, decades after American blacks were freed.

Everyone hated the idea of being a slave but few had any qualms about enslaving others. Slavery was just not an issue, not even among intellectuals, much less among political leaders, until the 18th century – and then it was an issue only in Western civilization. Among those who turned against slavery in the 18th century were George Washington, Thomas Jefferson, Patrick Henry and other American leaders. You could research all of the 18th century Africa or Asia or the Middle East without finding any comparable rejection of slavery there. But who is singled out for scathing criticism today? American leaders of the 18th century.

Deciding that slavery was wrong was much easier than deciding what to do with millions of people from another continent, of another race, and without any historical preparation for living as free citizens in a society like that of the United States, where they were 20 percent of the population.

It is clear from the private correspondence of Washington, Jefferson, and many others that their moral rejection of slavery was unambiguous, but the practical question of what to do now had them baffled. That would remain so for more than half a century.

In 1862, a ship carrying slaves from Africa to Cuba, in violation of a ban on the international slave trade, was captured on the high seas by the U.S. Navy. The crew were imprisoned and the captain was hanged in the United States – despite the fact that slavery itself was still legal at the time in Africa, Cuba, and in the United States. What does this tell us? That enslaving people was considered an abomination. But what to do with millions of people who were already enslaved was not equally clear.

That question was finally answered by a war in which one life was lost [620,000 Civil War casualties] for every six people freed [3.9 million]. Maybe that was the only answer. But don’t pretend today that it was an easy answer – or that those who grappled with the dilemma in the 18th century were some special villains when most leaders and most people around the world saw nothing wrong with slavery.

Incidentally, the September 2003 issue of National Geographic had an article about the millions of people still enslaved around the world right now. But where is the moral indignation about that?

According to that National Geographic article titled “21st Century Slaves“: There are an estimated 27 million men, women, and children in the world who are enslaved — physically confined or restrained and forced to work, or controlled through violence, or in some way treated as property.

Therefore, there are more slaves today than were seized from Africa in four centuries of the trans-Atlantic slave trade [11 million total, and about 450,000, or about 4% of the total, who were brought to the United States]. The modern commerce in humans rivals illegal drug trafficking in its global reach—and in the destruction of lives.

(Bolding and colors by CtH to help you keep track of where you are while reading.)

Comments Off on Twisted History