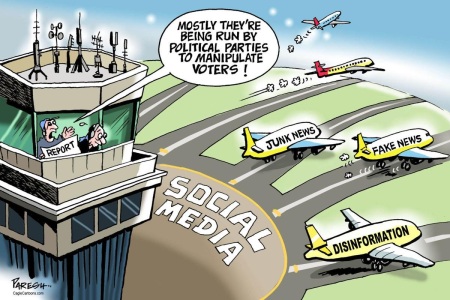 Andrea Widburg at American Thinker has an interesting take on Trump’s fight with the social media giant.

“Even Trump-supporters have wondered about Trump’s tweets implying that MSNBC’s Joe Scarborough had something to do with a young intern’s death in his office when he was still a Florida congressman.  It’s true that Scarborough and his co-host and wife Mika Brzezinksi have spent three years accusing Trump of treasonous collusion with the Russians, but Trump’s venom still seemed strange.

“I, however, don’t think it was strange at all.  Trump is one of the most calculating, rational people ever to occupy the White House.  He’s been faced with a serious problem, which is the fact that the immensely powerful social media giants, which are the gateway to most information nowadays, have already begun trying to sway the election to Biden.  Legislatively, thanks to three years of Russiagate and the current hostile House, Trump has been powerless.

“So Trump set a trap.  On Wednesday, the Twitter mouse took the bait. …

[Explains background story about intern’s death.] A furiously angry Mika Brzezinksi demanded that Twitter dump Trump: .@jack At what point is @Twitter a part of this? TAKE DOWN TRUMP’s ACCOUNT— the world world be safer. Retweet if you agree — Mika Brzezinski (@morningmika) May 20, 2020

“I think Mika’s demand was what Trump was waiting for.  He wanted to goad Twitter into doing something to get him off the platform.

“On Wednesday, Twitter took the bait.  As I’m sure Trump had calculated, Twitter didn’t do something as obvious as responding to Mika’s demands.  Instead, it flagged two of Trump’s tweets as false:

“By challenging the president that way, Twitter made the fatal mistake of overtly inserting itself as a content editor, and therefore publisher, of overtly political material.  Trump was ready:

“The big action appears to be that Trump will sign an executive order.  The best guess is that it will target the social media giants’ current immunity from libel and defamation suits because they’re viewed as bulletin boards, not publishers.  However, when they actively manipulate content — especially the most political content of all, which is statements from the President of the United States — they’ve put themselves in an editorial position and should be held liable.

“This has to have been Trump’s goal all along with those Scarborough tweets.  He goaded Twitter into censoring him, and the social media giant walked right into his trap.  Well played, President Trump.  Well played.”

CtH: Dan Bongino explained on his show the important difference between a “platform” and a “publisher.”

Newspapers and television news shows are “publishers” because they decide what will and will not be said. But the social media giants have made the case that they should not be held liable for what appears on their platforms, because they do not edit or censor content.

But now Twitter has done exactly that … and to the worst possible person – a very savvy POTUS who has “a phone and a pen” and who is running for re-election.