Lee Smith writes at Tablet that, just two days after Donald Trump upset Hillary Clinton to become the 45th president of the United States, President Obama told Trump NOT to hire Michael Flynn. Obama told an aide that he was bewildered by this. Of all the things an out-going president could choose to talk about, why did he pick that?

We know now that the whole Russia collusion thing was a hoax and that Obama et al. not only knew it was bogus, but had actually invented it. We also know tht Obama’s animus toward Flynn was real.

Why did Obama care so much about Michael Flynn that he tried to discourage Trump from hiring him? Simple. Flynn had strongly opposed Obama’s Iran deal. If he got into a position of power in the Trump administration, he could undo this signal piece of Obama’s legacy.

Dan Bongino talks (46 minutes to the end) about how Obama’s “fixer”, attorney Kathryn Ruemmler, is back. He believes the media can no longer ignore the revelations about how Michael Flynn was deliberately targeted and that the Left’s goal and the Slime Media’s new narrative will be to protect Obama’s backside by throwing Jim Comey under the bus.

CHRISTOPHER STEELE: A week before Trump’s inauguration on January 20, 2017, the British Embassy delivered a letter to Michael Flynn and Susan Rice (the incoming and outgoing National Security Advisors). In it, they declare that the purported author of the Trump-Russia dossier, former British Secret Service Agent Christopher Steele, can not be trusted.

In 2019, Christopher Steele’s lawyers claimed he could back up the accuracy of the dossier with reference to his meticulous notes and recordings. In May 2020, Steele testified under oath in a British court that he had deleted every trace of his dossier investigation from his computers in January 2017.

WHITE HOUSE PRESS BRIEFING: May 20, 2020 – At the beginning, PressSec Kayleigh McEnany calls out the Democrat’s idiotic demand for the creation of a position that President Trump created in March. Derp.

She also dissed CNN’s Chris Cuomo for his attack on President Donald Trump’s decision to take hydroxychloroquine to ward off coronavirus. Leftie talking heads, including Cuomo, claimed hydroxychloroquine is not an FDA-approved medication, which is not true.

Unfortunately, what is also not true is that McEnany claimed Cuomo himself took a less safe version of the drug, called quinine, when he had the virus. The FDA removed this from the market in 2006 because it had serious side effects, including death.

Wait, wut? If the FDA removed it, how could Cuomo have gotten it and why would his doctor have prescribed it?

Turns out … Cuomo’s recovery regimen, which is described the The Sun article below, consisted of a daily sauna, a walk around his yard, and a bunch of homeopathic remedies and nutritional supplements. The only drugs he took were Tylenol and Allegra-D, both of which are OTC.

TRUMP: Click to hear him give the TDSers their next head-exploding meme. (It’s right at the beginning.)

I’ve started to wonder if he spends his time in the shower cooking up the next thing he’ll say to set them off. In this clip, he’s clearly joking, but I totally expect Mika and Joy and all the rest of them will report it as an impeachable offense against the First Amendment.

DEMO-NAZIS: Kill the useless eaters – In mid-April, Michigan’s Democrat governor, Gretchen Whitmer, issued an executive order that requires nursing homes below 80% capacity to accept COVID-19 patients … regardless of that facility’s ability to keep the other patients safe from the virus.

We have known from the first outbreak in Washington that nursing homes were uniquely vulnerable. About a third of COVID-19 deaths in the U.S. have been among nursing home patients.

Florida’s Republican governor, Ron DeSantis, has an unusually high percentage of elderly, many in nursing homes. He set up stringent guidelines to protect them from the virus.

I’ve heard the Slimers go on and On and ON about how “dangerous” it is for Trump to be promoting hydroxychloroquine. “People might take it and DIE!”

What I don’t hear them talking about is the SCORES of people who actually did die because of what Cuomo and Whitmer did. 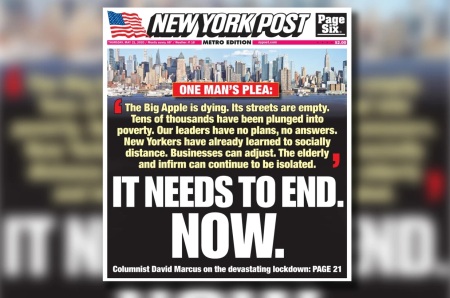 COVID-19: Turns out all that worrying and sterilizing we did to our mail and groceries was probably unnecessary. The CDC now says the virus does not spread easily from surface contact.

In Minnesota, the Catholic and Lutheran-Missouri Synod churches put Democratic Governor Tim Walz on notice. They will resume worship services on May 26. Period.

Walz’s order said retailers could open at 50% capacity, but church worship services had to be limited to ten people only, regardless of the size of the sanctuary. 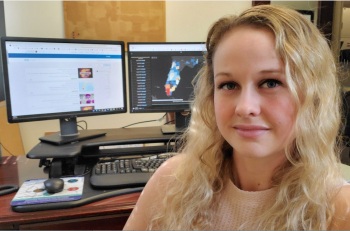 MEDIA MALPRACTICE: On Wednesday, the Slime Stream Media went bonkers thinking they’d found an excuse for why Republican DeSantis’ state has done SO much better with the virus than Democrat Cuomo’s state has done. “The data was manipulated!”

It seems a woman, one Rebekah Jones (photo), was pissed about being fired from her job at the Florida COVID-19 website. So she told CBS12 News that it was because she had refused to “manually change data to drum up support for the plan to reopen.”

When the Left made it into a Great Big Deal, she backpedaled hard. Jones now says, “Is this one of those stupid things that I shouldn’t have said?” And, “I really don’t want this to be a story.”

Uhhh, maybe because she lied? It’s not hard to believe, given her known history.

In 2019, a man reported her for posting naked pictures of him on a website and sharing it with his place of employment and family members. The man told police he had an injunction against Jones for a year until it recently expired. She was arrested and charged with cyberstalking and sent for a psychological evaluation. There is a pre-trial hearing set for June 17. She could face up to twelve months in jail.

Over the years, this “Brave Democrat Whistleblower” has also been charged with Criminal Mischief (over $200 but less than $1000 in damages), Contempt of Court (for violating a protection order related to an incident of domestic violence), Trespassing, and Robbery by Sudden Snatching.

It looks to me like she’s got a lousy attitude, a bad temper, and really poor impulse control.

Oh wait … that makes her the ideal Democrat! Sorry, my bad.

DUMBOCRATS: [4:48] – They just can’t let go of their Trump Derangement long enough to actually do their damn jobs.

ANTI-CATHOLIC: LGBT activists got a Catholic home health aide fired from her job because they didn’t like something she posted on social media.

Way to show us all how “tolerance” is done!

Also, one Flying Finger Award to her employer for caving to the nasty Cancel Culture Crowd, violating this woman’s First Amendment rights, and depriving clients of a home health aide who hadn’t had a single complaint ever. 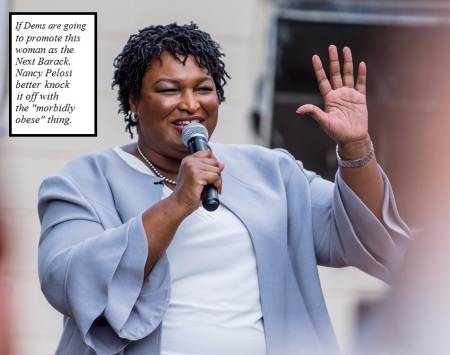 BABYLON BEE: Sitting at the governor’s desk at the Georgia state capitol, Stacey Abrams told reporters she would step down from her governorship if asked to run for vice president.

“If Biden asks me to run, I’ll need to focus on that full-time,” she said. “As much as I love running this great state, if the country needs me, I’ll be there.”

A security guard patrolling the capitol building then entered the governor’s office. “Come on, Stacey. Time to go. How many times do we have to have this talk?“

“Classic Greg,” she said, laughing. “He’s a real jokester. Anyway, yes, if Biden decides he is not a racist and wants me to run, I’ll be there, giving my all to make sure we win the White House. It will be tough, but I know the people of Georgia will understand why I need to leave them for a while to save this country.“

“But really, you can’t be here,” the security guard said uncomfortably. “Don’t make me drag you out of here again.”