It’s a huge scandal, not a conspiracy theory. 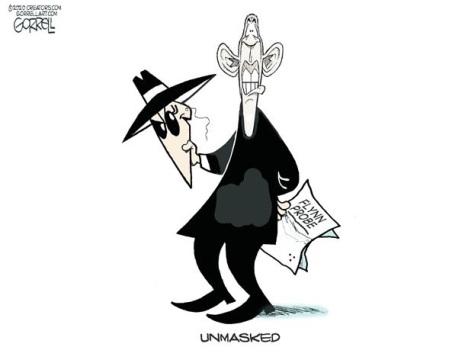 This week, an article in The Federalist said, “A string of recently released documents have confirmed that the entire Russia-Trump investigation, which eventually entrapped Flynn and forced then-Attorney General Jeff Sessions to recuse himself, was an unprecedented abuse of power that amounted to organized effort by the Obama administration to nullify the results of the 2016 presidential election. It was in effect an attempted coup.

“If you haven’t picked that up from the news media, it’s not your fault. Instead of grappling with the implications of newly released details about what Obama officials were doing to undermine the incoming Trump administration during the transition, the mainstream media have fixated on Trump’s use of the term Obamagate, dismissing it as a conspiracy theory.” – John Daniel Davidson, The Federalist, May 13, 2020 [Emphasis mine.]

People who have been paying attention have suspected this was true right from the start. Lee Smith wrote in Tablet on December 20, 2017.

“If a sitting president used the instruments of state, including the intelligence community, to disseminate and legitimize a piece of paid opposition research in order to first obtain warrants to spy on the other party’s campaign, and then to de-legitimize the results of an election once the other party’s candidate won, we’re looking at a scandal that dwarfs Watergate—a story not about a bad man in the White House, but about the subversion of key security institutions that are charged with protecting core elements of our democratic process while operating largely in the shadows.” [Emphasis mind.]

Back then, it was a compelling possibility based on public source documents. With the recently declassified and published documents, it’s now it is an undeniable fact. Obama and his cronies and lapdogs can yammer all they want about “conspiracy theories.” It doesn’t change what we now know for sure really happened.

We absolutely MUST give Trump a loyal House and Senate for his second term so all of this will come out and the appropriate people will be put behind bars.

Comments Off on ObamaGate