Attorney General William Barr is now in possession of the list, and has the authority to make the document public.

Most of the people who have become ill were sick by day 14 following exposure. In rare cases, symptoms showed up after 14 days. We also know that some people who contract the virus have very mild symptoms or never show symptoms at all, yet are contagious to others.

In other words, it is well within the realm of possibility that the Wuhan lab experienced some kind of accident in October that led to the virus getting loose. 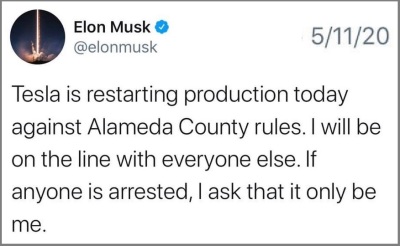 CALIFORNIA: On Friday, a county health official said the county had asked all manufacturers, including Tesla, to delay operations by at least another week to monitor infection and hospitalization rates.

On Saturday, Tesla released a plan to keep workers returning to the factory safe. These include temperature screenings, the installation of barriers to separate work areas and protective equipment for workers. Similar measures are in use by Detroit-based automakers that resumed work on Monday.

On Monday, Tesla CEO tweeted the above.

On Tuesday, employee parking lots at Tesla’s factory in Fremont, California, were packed with cars and trucks could be seen driving in and out of the factory grounds.

I haven’t heard what, if anything, the county jackboots did to shut Musk down again.

FLORIDA and GEORGIA: Gov. Brian Kemp of Georgia and Gov. Ron DeSantis of Florida, both Republicans, were depicted as reckless science-doubters by the media for choosing to re-open their states ahead of federal guidelines.

But neither state has experienced an outbreak. In fact, both Florida and Georgia are doing well. Their COVID death rates per 100,000 are well below the national average 25. Georgia’s is at 13. Florida’s is at 8. (New York’s is 139, almost all of it in the metro areas.)

McENANY: I love Trump’s new Press Secretary [2:37] – On Tuesday, a reporter with The Washington Post gave her a hard time about “bragging” about how great we’re doing with testing.

“And let’s note that South Korea was the gold standard for testing. In fact, on March 13, The Washington Post headline was ‘South Korea is doing 10,000 coronavirus tests a day. The U.S. is struggling for even a small fraction of that.’

“And here we are on May 11, with a Washington Post headline, ‘The administration keeps bragging that the U.S. testing now is better than South Korea’s was a month ago.’

“So you can’t demand that we reach South Korea and then say that we’re ‘bragging’ when we do. This is a moment where the American private sector succeeded. This administration mobilized that testing.

“Every state is better off than South Korea at this moment, and that is a very good thing and something to be celebrated because it’s American innovation at its best.”

2020 CAMPAIGN: Back when there were multiple Democratic candidates, the totals of their fundraising efforts usually exceeded what Trump was raising. April was the first month that Joe Biden was the only Democratic candidate and it looks like the enthusiasm of Democrat donors has dropped quite a big.

The April total for both the Biden campaign AND the Democratic National Committee was $60.5 million, while just the Trump campaign took in $61.7 million. I wasn’t able to find a number for the RNC’s April take, but I did find the graph above which shows that, at the end of the first quarter, the RNC was in much, much better shape than the DNC.

The abortion lobby has responded with multiple lawsuits and Planned Parenthood chose to withdraw from Title X rather than comply.

Meanwhile, the 4th Circuit Court has said the Protect Life Rule cannot be enforced within Maryland for the time being.

CATHOLIC: “Pro-abortion Catholic” is an oxymoron, because support for abortion automatically excommunicates a person from the Catholic Church.

FLOTUS: Behind the Scenes at the First Lady’s Office [3:23] – This is a nice report. 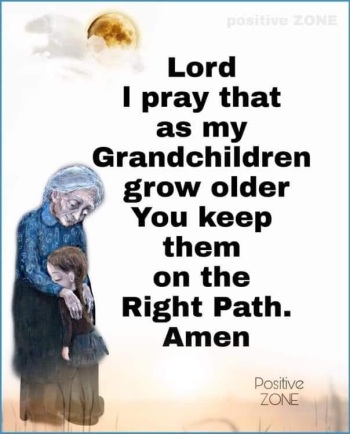 Just heard from the Mascots that their state is also opening up to Phase One on Friday. FREEEEEEEEDOMMMMMMMMM!!! (with appropriate precautions) LOL