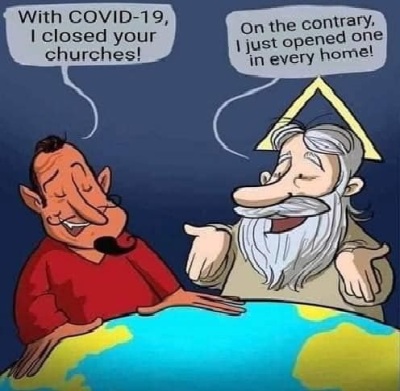 REOPENING: [4:58] – A draft Trump administration plan calls for a “phased reopening” of the economy. The plan, which received input from the CDC and FEMA, would allow reopening based on local conditions. Nothing specific is set in stone. He’s still meeting with business, religious, political and other types of leaders to get their input about this critical decision. We need to pray for him.

“Lifting stay-at-home orders carefully, on a community by community basis, only when ready, will help extend the gains made from this time of collective social distancing,” the draft document states. 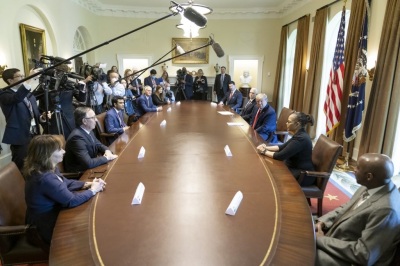 WHITE HOUSE: On April 14, President Donald Trump hosted some Americans who have recovered from COVID-19 at the White House. 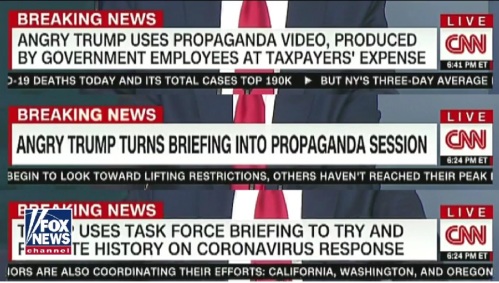 First, after the press spent weeks concocting a fantasy rift between President Trump and Dr. Anthony Fauci, the doc showed up to end that dream.

“The first and only time that Dr. [Deborah] Birx and I went in and formally made a recommendation to the president, to actually have a, quote, shutdown, in the sense of … strong mitigation, we discussed it. Obviously, there would be concern by some that, in fact, that might have some negative consequences. Nonetheless, the president listened to the recommendation and went to the mitigation.”

So Trump took the experts’ advice the moment it was offered.

How did the media respond? Did they think, “Wow, we were wrong to waste America’s time with stupid high school cafeteria gossip?”

No, they acted like a baby losing its favorite toy.

“Are you doing this voluntarily? Or did the president or vice president ask you to do that?” CBS’ Paula Reid asked Fauci.

He responded, “No … everything I do is voluntary. Please, don’t even imply that.”

Yes, it finally happened. Even the calmest guy in the room hates the media as much as everyone else does. Note to media: when Fauci thinks you suck, that’s a real diagnosis. Take two months off and don’t call us in the morning.

After weeks of the media pretending they were on top of the virus while claiming Trump had blood on his hands, what did Trump do?

What any old TV pro would do. He dropped a montage to show how wrong the media was. It included Democratic New York Gov. Andrew Cuomo saying, “His team is on it. They’ve been responsive, late at night, early in the morning. And they’ve thus far been doing everything they can do, and I want to say thank you.”

The montage was a media trick that only the media is allowed to pull. So you know it pissed them off. How dare he use their own words against them! That’s propaganda.

In the briefing room and on Twitter, their incontinent outrage spilled onto their screens and into CNN’s sweaty headlines. You could almost see the steam coming out of Jeff Zucker’s ears.

And why? Because only the media has the power to destroy your reputation. But don’t you dare turn the tables on them. Which Trump did.

Trump also mentioned that we have a lot of extra ventilators.

Maybe we should drop them off for the next briefing.

CtH: You can see Greg’s montage of the Slime’s response to Trump’s montage at the link. I don’t know how to embed it. It’s also worth watching Dana’s comments. If there’s anything good after that, I don’t know about it, because I always turn off The Five as soon as Juan starts yammering.

MEDIA MALPRACTICE: For the past several weeks, while TV journalists have been unrelentingly nasty in their coverage of President Trump’s handling of the coronavirus pandemic, they’ve been wetting themselves over their new darling, New York Governor Andrew Cuomo.

Cuomo was told years ago the state didn’t have enough ventilators in its health emergency stockpile. Rather than budget the money for the amount the health advisers recommended, he told them to make a triage plan for who would not get one.

When the crisis actually came, he knew it wouldn’t look good to admit that he was responsible for the shortage of ventilators, so he blamed it on Trump. But the Constitution places emergency management on the states. The feds are supposed to just be back up.

Ironically, Cuomo gave high praise to President Trump for his handling of the coronavirus pandemic in his state, saying the president remains ‘amazingly accessible’ and has ‘delivered’ where it counts. The Slimes don’t care to give credit where credit is due … not if it means saying anything nice about Orange. Man. Bad.

MEDIA MALPRACTICE: CNN so reflexively hates President Trump that pundits called clips of their own words being played back to them “anti-media propaganda.” Apparently, they spent the whole evening after Monday’s Task Force briefing bitching about mean ol’ Trump forcing them to watch their own bad reporting. The griping continued into Tuesday morning.

DIRT STUPID: HBO’s far-left John Oliver has used his last two programs to insist that the response to the pandemic is universal health care, prison reform, and an end to the “dirt-stupid reporting” of One America News.

Silly us thinking the response to a deadly, mindless virus should be to practice social distancing to prevent it from spreading, to ensure hospitals have adequate resources to treat those who become critically ill after catching it, to develop accurate tests and effective treatments as quickly as possible, and to crank up the vaccine-making machines so we can never have to be afraid of it again.

WHAT AN IDIOT: George H.W. Bush’s Director of the Office of National Drug Control Policy (read: NeverTrumper) spewed nonsense on Fox & Friends about how COVID-19 wasn’t a “pandemic” and that all the “panic and pandemonium” were all just “hype.” (Tell that to the hundreds of thousands who have died all around the world.)

One piece of evidence he claims supports his ridiculous (Trump is an idiot) assertion is that the models that predicted massive loss of life were supposedly all wrong, because … get this … we’re now looking at maybe only 60,000 deaths.

Uhhhhhhhhhhhhh … does he even listen to the Task Force briefings or you know, think, like, at all? The massive numbers were based on DOING NOTHING. The actual numbers are the result of shutting down the country to slow the spread.

MEDIA MALPRACTICE: They crucified Brett Kavanaugh over a flimsy, decades old sexual abuse allegation, but now that a Democrat is in the hot seat, suddenly they’re all about due process. It’s been almost three weeks since a former staffer for Joe Biden, Tara Reade, came out and told the media she had been sexually assaulted by the former vice president and 2020 Democrat frontrunner.

There has been a total blackout of the serious allegation on ABC, NBC and CBS. And New York Used To Be A Newspaper Times actually removed an incriminating sentence from its story, because, according to New York Times executive editor Dean Baquet, “the [Biden] campaign thought that the phrasing was awkward and made it look like there were other instances in which he had been accused of sexual misconduct.”

MEDIA MALPRACTICE: NPR reports that, six years ago, a reporter at Bloomberg News put together a story about the wealth of Chinese Communist Party elites.

Fearful of repercussions by the ChiComs, Bloomberg News killed the story and successfully silenced the reporters involved. Bloomberg even went so far as to target a reporter’s wife to make her keep her mouth shut, too.

DEMOCRATS SUCK: House lawmakers won’t return to the Capitol until May 4 or later due to the threat of the coronavirus Democratic leaders told rank-and-file members on Monday. The move extends a prolonged recess that began in March 12, and it abandons a plan to reconvene on April 20.

Hoyer’s statement comes after his fellow Democrats held up Phase Three of the congressional coronavirus relief effort because of a liberal wish list that included irrelevant environmental measures, and blocked an additional $250 billion for small businesses under the Payment Protection Program. Democrats said they want to include more money for hospitals and food stamps in the additional funding, but Republicans want to keep the focus on small businesses, many of whom have had to let go of their employees.

“Members are further advised if the House is required to take action on critical legislation related to the coronavirus response or other legislative priorities, members will be given sufficient notice to return to Washington D.C.,” House Majority Leader Steny Hoyer, a Maryland Democrat, told Democrats in a letter. 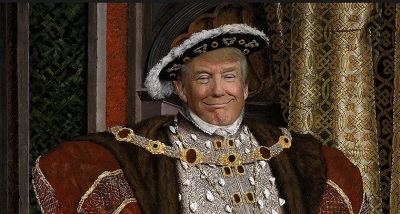 FUNNY: Babylon Bee “reports” that by all accounts, President Donald Trump has now gone completely mad with power. In a press briefing, he laid out his insidious plan.

“When I’m done with this country, everyone will be able to leave their houses whenever they want and do whatever they want,” Trump told the press with an evil grin. “They’ll be able to peaceably assemble in whatever size groups they desire! Muhahaha!”

NOT FUNNY: Conan O’Brien, the unfunny comedian and former Tonight Show host, decided take advantage of a global tragedy and the holiest day of the year to slander Jesus and Trump.

There was a lot of outrage expressed, but my favorite (besides James Woods, above) was The Blaze’s Jessica Fletcher who simply tweeted, “What is wrong with you.” 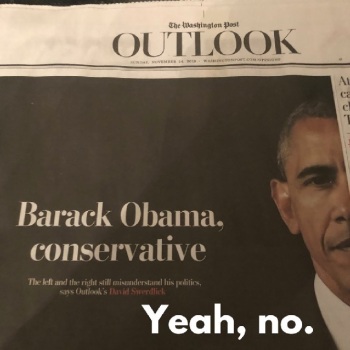 OBAMA: Barack finally got around to endorsing his “good friend” Joe Biden, praising him for having the most “progressive platform of any major-party candidate” in history.

GRAMMY NOTES: I sent the Mascots a link to Mrs. Trump’s reading of a picture book about a bunny. Mama sent back a photo of them watching it. 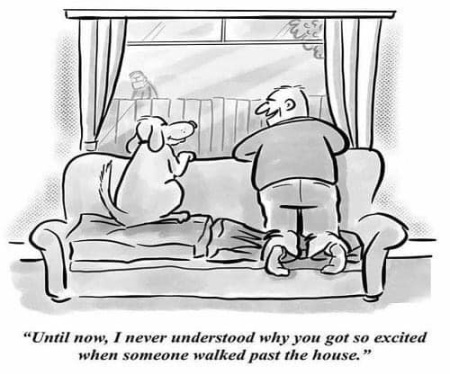