END_OF_DOCUMENT_TOKEN_TO_BE_REPLACED

Comments Off on Leap Day! 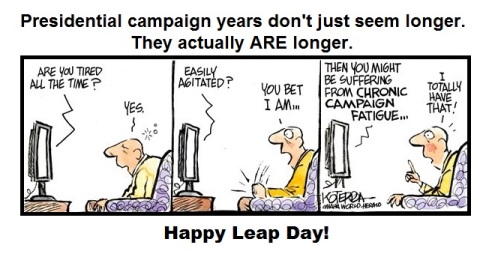 END_OF_DOCUMENT_TOKEN_TO_BE_REPLACED

TRUMP RALLY: As seen by a “recovering Leftist” – “The staging area was roped off to form a long, snaking chute for people lining up for the Trump rally. These 30 rows or so, each the length of a city block, were considerably longer than the TSA line at Denver International Airport. …

“We got in line and were immediately introduced to our queue companions, with whom we would be spending the next five and a half hours. There were whites, blacks, Asians, Latinos, young, old, straight, and gay people, decked out unapologetically in stars and stripes, celebrating freedom of expression they wouldn’t dare at the supermarket. There was no squabbling, line-cutting, or littering, just thousands of people happily standing in the cold, knowing they could be themselves without Antifa punching them in the face — also knowing they might not get in.”

END_OF_DOCUMENT_TOKEN_TO_BE_REPLACED

These three senators’ moral red lines confound me. How can anyone, in this day and age, still believe the right to life begins with breathing?

Advanced medical technology now makes it possible to sustain life in people who can’t breathe on their own, whose hearts aren’t beating on their own, and who have no detectable brain activity.

This has made the definition of the end of life a lot more ethically complex.

Should it not also make the definition of the beginning of life more ethically complex?

END_OF_DOCUMENT_TOKEN_TO_BE_REPLACED

“Today, millions of Christians will be marked on their foreheads with the sign of the cross. The imposition of ashes is an invitation to spend time during Lent fasting, praying, and engaging in acts of charity.

“This powerful and sacred tradition reminds us of our shared mortality, Christ’s saving love, and the need to repent and accept the Gospel more fully.

“May you grow closer to God in your faith during this blessed season.”

END_OF_DOCUMENT_TOKEN_TO_BE_REPLACED 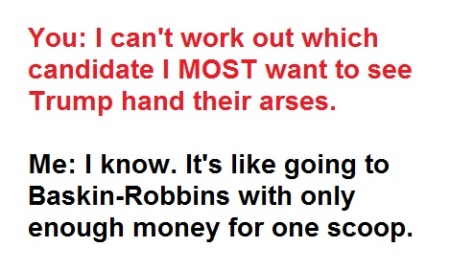 SOUTH CAROLINA DEBATE: From Patricia McCarthy at American Thinker – “The most appalling aspect of the debate was the sheer childishness of it.  The moderators, while they did ask a few challenging questions, lost control from the outset. Why? Because the participants, with the exception of Klobuchar, behaved like MMA cage fighters without a referee. They all talked at once, raising and waving their hands to be called on like second graders, shouting over one another as if they were guests on the Jerry Springer show.  It was pathetic. … Not one of them has a chance in hell of beating Trump.”

From David Ng at Breitbart – “Unlike the last debate in Las Vegas that saw the stars eagerly championing their favorite candidates and dog-piling on Mike Bloomberg, the South Carolina event failed to elicit much passion aside from derision among celebrities.” Among the criticisms were “What a mess”, “Losers”, “Joyless”, and “Unprepared.”

END_OF_DOCUMENT_TOKEN_TO_BE_REPLACED

They justify their refusal to pass the Born-Alive Infants Protection Act by saying it’s a non-existent problem. That’s not true. 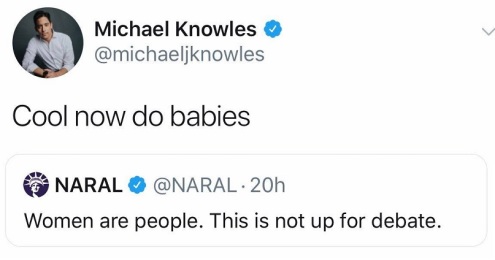 Back in the 1980s, Dr. Rocco Pascucci was a first-year pediatric resident at a teaching hospital in Monmouth County, New Jersey.

One day, while he was working in the intensive care nursery, a cleaning woman came to him with a message he has never forgotten.

“She told me there was a baby crying on the garbage can in the little treatment room,” he recalled.

He went into the four-by-four room where medications were kept and found a tiny baby wrapped in a hospital blanket. The baby had been left on top of a big metal garbage can, and he was crying.

Not stopping to wonder why the child had been abandoned there, Dr. Pascucci put the baby in a warmer, put him on oxygen, and inserted a line into his umbilical artery, which is how premature babies receive nutrition and how health-care workers check blood gases. The care the infant received was standard for any premature baby.

After the baby was stabilized, “a high-risk OB/GYN came in and yelled at me,” Dr. Pascucci said. “He told me I had just saved an abortion. He got into a huff and walked out.”

Nurses told Dr. Pascucci it was standard procedure to leave these babies on the garbage can until they died. It was his impression that this was not a rare occurrence.

“The cleaning lady knew it,” he said. “The nurses knew it.”

Because of the care he received that little boy suffered from no long-term health problems and was placed with an adoptive family.

On Tuesday, the U.S. Senate again voted down the Born-Alive Abortion Survivors Act that would have required life-saving care for any baby who survives an abortion.

CORONAVIRUS: Let us all offer up at least a portion of our Lenten prayers and sacrifices this year for God’s healing and mercy.

The rule requires that abortion businesses separate their abortion services from their family planning/birth control services both physically and fiscally in order to qualify for Title X family planning federal funding.

END_OF_DOCUMENT_TOKEN_TO_BE_REPLACED

ABORTION BERNIE: In 1987, Bernie Sanders said, “If we expanded Medicaid [to] everybody. Give everybody a Medicaid card—we would be spending such an astronomical sum of money that, you know, we would bankrupt the nation.”

This is still true, but now he has introduced legislation to actually do it.