Adam Schiff and his cohorts have gone to extraordinary lengths to try to keep secret the identities of the whistleblower and his crony in Adam Schiff’s office. Here’s why.

Eric Ciaramella (char-uh-MELL-uh) is widely believed to be the fake whistleblower whose hearsay report about the Ukraine phone call set off the Democrat’s impeachment of Donald Trump.

END_OF_DOCUMENT_TOKEN_TO_BE_REPLACED

Democrats who wanted Hillary to win the 2016 election used the power of the federal government to spy on the Trump campaign.

A judge with the Foreign Intelligence Surveillance Court (FISC) has ruled that the authority this court granted to the federal government to secretly wiretap and spy on former Trump affiliate Carter Page was “not valid.”

The FISA law states that American citizens cannot be secretly spied on by the U.S. government absent probable cause, based on valid evidence, that an American is unlawfully acting as a foreign agent. N.b., it is not against the law for an American to act as a foreign agent; lobbyists do it all the time. There must ALSO be an actual crime.

“Not valid” means the evidence presented to the FISA court was bogus. The FBI had no evidence that Carter Page was acting as a foreign agent OR that he had committed any crimes. What he was doing was working with the Trump presidential campaign. END_OF_DOCUMENT_TOKEN_TO_BE_REPLACED

The 47th March for Life 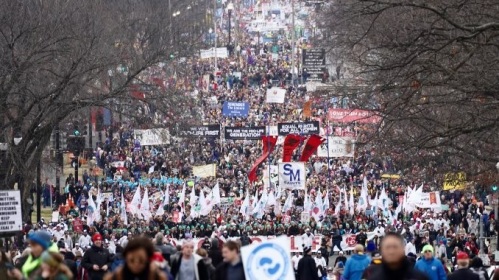 This happens ever year, regardless of how miserable the January weather is. And as per usual, the crowd was estimated in the tens, possibly hundreds of thousands.

The march was kicked off by a rally on the National Mall attended by thousands, where President Donald Trump became the first U.S. president to address the March for Life.

“Unborn children have never had a stronger defender in the White House,” Trump said. “Every life brings love into this world. Every child brings joy to a family. Every person is worth protecting.”

The president highlighted recent state-level efforts to expand abortion to include all nine months of pregnancy, singling out legislation passed in New York last year as well as controversial comments by Virginia Governor Ralph Northam (D).

END_OF_DOCUMENT_TOKEN_TO_BE_REPLACED

Where hatred for Catholicism trumps compassion for victims of sex traffickers. (Tell me again who is waging a war on women?)

Can you even fathom that California has refused a license to this San Diego Catholic charity that wants to open a home for teen victims of sex trafficking?

California isn’t concerned that the facility isn’t legitimate or safe. No, no. California has denied the license, because the Catholics running the organization are not willing to promote LGBTQ events, drive residents to get abortions, and inject minors in their care with transgender hormone medications. Apparently they think it’s better for these kids to die.

The charity, Children of the Immaculate Heart (CIH), currently provides housing and a rehabilitation program for adult survivors who have children. They are raising money for one of their adult clients who needs brain surgery. When I checked, they only needed $2,500 more to reach their goal. The link to donate is below.

Breitbart News reports that, since the Slime Stream Media has intensified criticism of her, White House Press Secretary Stephanie Grisham has been increasingly targeted by Left-wing haters with postcards, letters, and social media messages filled with vulgar language and hate-filled threats.

One of them called her a “treacherous b*tch,” referred to her predecessor – Sarah Huckabee Sanders – as “F*ck-a-Me,” and said that anyone who works in President Trump’s White House has their “brains melt into puddles of turds.”

END_OF_DOCUMENT_TOKEN_TO_BE_REPLACED

“COME TO ME”: Lay your burden down – God’s greatest desire is to forgive. No matter how far we have each strayed from His side, He says to us, “Don’t be afraid. Draw close to my heart.”