IMPEACHMENT: January 16, 2020 – The Dems finally delivered the articles of impeachment to the Senate.

President Trump has selected Pat Cipollone (pronounced SIP-uh-loan-ee) to lead his defense during the impeachment trial in the Senate. Cipollone is a devout Catholic and father of 10.

BONGINO: [1:00:58] – If you’re interested in understanding why the Democrats are so frantic to hide the truth about Ukraine, find the time to listen to the first half hour of this one.

HANNITY: January 15th news [11:50] – Trump signed a deal with China. Democrats finally sent the articles of impeachment to the Senate. The managers are all partisan whackos. 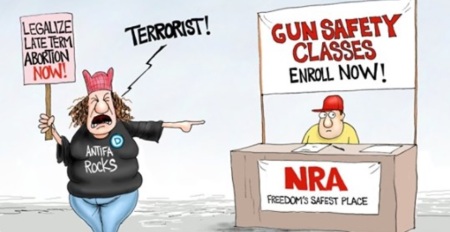 NRA: Excerpted from the National Review – Los Angeles, San Francisco, and New York have all attempted to take down the NRA by targeting its access to insurance and banking services.

Now all three are facing a reckoning in court, based not on the Second Amendment but on the First. Without needing to even consider the issue of gun rights, federal courts are recognizing that boycotts enforced by government power can menace free speech and free association.

The California public officials helped provide the basis for their rulings by tweeting and speechifying about how much damage they intend to do the NRA. New York’s Gov. Cuomo was cagier, but there was sufficient evidence that the government was specifically targeting the NRA to allow the First Amendment argument.

EPSTEIN: The U.S. Virgin Islands is suing the estate of disgraced financier and convicted sex trafficker Jeffrey Epstein, claiming he used the Virgin Islands to facilitate the sexual molestation and exploitation of numerous girls between 2001 until 2018.

Too bad they didn’t do something about him while he was doing it.

SCIENCE: A group of 9th graders designed a science experiment to investigate the effect of wi-fi radiation on living cells. They put separated 400 cress seeds across 12 different trays. The trays were given the same amount of water and access to sunlight, but half of them were placed next to two wi-fi routers. These routers transmit the same type of radiation as cell phones. After 12 days, the wi-fi seeds were mostly dying or dead.

This is really dramatic, though not terribly surprising to me.When I walk by a transformer, my teeth ache and I feel anxious, but if I cross the street, I’m fine. When I use our cordless land line, I have to have it on speaker and, preferably, not hold it in my hand and I refused to have Wi-Fi installed on my computer. Dearest works with people like me, so he tested our house and appliances with his EMF detector. Our heaters emit out to about a foot, but I don’t get that close to them. My clock radio was really bad, so that went into the trash.

GOSNELL: “So many people have been changed forever after reading our Gosnell book.” – Ann McElhinney