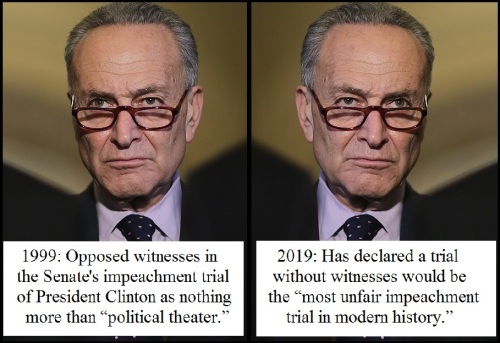 From Byron York at the Washington Examiner, Dec 22, 2019 – “The House of Representatives impeached President Bill Clinton on Dec. 19, 1998. It was a Saturday. The votes, in which two articles of impeachment passed, were held around midday. By 3 p.m., the House had passed a resolution naming its impeachment managers, and those managers had physically delivered the articles to the Senate for trial.

“Impeachment was on. The House, controlled by a Republican majority, was serious about its ultimately failed effort to remove Clinton from office.

“Contrast that to today. On Wednesday, Dec. 18, at around 8 p.m., the Democratic-controlled House passed two articles of impeachment against President Trump. Speaker Nancy Pelosi immediately announced that the House would not appoint managers, and the articles would not be delivered to the Senate. The next day, Pelosi told reporters she did not want to talk any more about it, and the House went into recess until Jan. 7.

“After the weekly Senate Republican lunch, I asked one GOP lawmaker, via text, what the party’s reaction was. He texted back a one-word answer: ‘Laughter’. …

“During the House impeachment inquiry, Republicans often complained that Democrats did not observe basic rules of fairness. On one hand, Democrats denied the charge, and on the other, they argued that the majority can do what it wants. It’s true. Given the constitutional authorities involved, the House Democratic majority could do what it wanted during impeachment.

“Now, if there ever is a trial, the Senate Republican majority can also do what it wants. And whatever they choose in the end, Pelosi’s gamesmanship will likely make the GOP more united.”

The Guardian said, “There were no clear winners.”

The New York Post says “Buttigieg took the brunt of the night’s broadsides,” but “smaller skirmishes were the norm in what proved to be the cycle’s most action-packed debate following a series of snoozers.”

The National Examiner said, “When Democratic presidential candidates were offered the chance to weigh in on Middle East policy during Thursday night’s debate, they spent their time attacking Israel and Prime Minister Benjamin Netanyahu. But at no point did any of the candidates think to mention Palestinian terrorism.”

END_OF_DOCUMENT_TOKEN_TO_BE_REPLACED

Child in a Manger 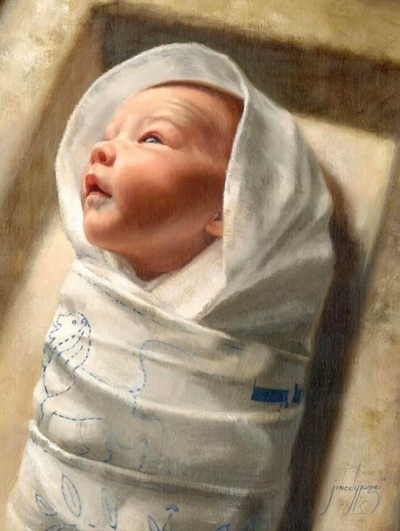 FROM THE ARTIST: “A few years ago, I began to feel that I should attempt a Nativity painting. This of course was a very daunting idea, but I figured the best place to start was with research. I began with Luke 2:7,

‘And she brought forth her firstborn son, and wrapped him in swaddling clothes, and laid him in a manger; because there was no room for them in the inn.’

“He suggested that the manger would have most likely been carved out of white limestone, one of the most abundant natural resources in the Israelite region, and showed pictures of many similar mangers they have uncovered on archaeological digs.

“And while we like to think of the baby, ‘asleep on the hay’, he also states that this was also unlikely, as grass was available on the hills surrounding Judea year round. They really would have had no need to store hay, and the mangers were most likely used for water.

“I also learned that while we often think of ‘swaddling bands’ as scraps of fabric, showing the poverty of Mary and Joseph, they were actually a big part of Israelite culture. When a young woman was betrothed she immediately began embroidering swaddling bands, which were 5-6” wide strips of linen that would be embroidered with symbols of the ancestry of the bride and groom.

“Thus the bands symbolized the coming together of the two families as one. They also symbolized the integrity of the woman, as she strove to make both sides of the embroidery match exactly, symbolizing to her soon to be husband that she was as good on the inside as she was on the outside. These bands were then wrapped around the hands of the couple at the wedding ceremony. So the bands the Savior was swaddled in may have included the lion of Judah and the stem of Jesse.

“As I wrapped my head around these rather mind altering ideas, I realized that many of the concepts that we have of the Savior’s birth revolve around paintings of European artists from centuries ago. I’m sure they painted according to the best of their abilities and knowledge, but I also wondered why more modern painters had yet to illustrate these concepts. I felt up to the task and began sketching right away. I picked up limestone from a stone yard, I bought linen from the fabric store, and just in time one of my good friends had a baby boy, and oddly enough, his name was Luke. I put all these components together and created this painting.

“As I’ve sketched and worked, my heart has been so full as I’ve uncovered this image. For when you take away the Hollywood drama, the traditions of centuries, and the wood and the hay, all you’re really left with is a babe in white linen on white stone.

“And my mind immediately went to the purpose of the Savior’s life: He was born to die. He came as the sacrificial lamb for all mankind; so how fitting that He would begin his life on a stone altar of sorts, and be wrapped in white linen, like he would after His death. And of course He would be placed in a trough for water, for He would be Living Water, and would bring life to all.

“I also found myself weeping for the Father, and how it must have felt to see His Son begin life foreshadowing His death. My heart was so full of gratitude that He would send His Only Begotten to be the Savior for us all. That He would send His Son, the King of Kings, and Lord of Lords, to die so that we all might live. What good news, what comfort and joy, what a gift was given to us all.

GRAMMY NOTE: I collected this story yesterday afternoon, then tucked it away to post this morning. In the evening, Dearest and I watched an episode of SEAL Team where the guys were holed up in an Afghani barn. And in that barn was a white, stone trough. Full of water.

I just love it when God performs one of His “coincidences”!