IMPEACHMENT: World watching [31:40] – Senate Majority Leader Mitch McConnell reviews the history of impeachment and the scandalously partisan actions of the Democrats in the current House of Representatives.

END_OF_DOCUMENT_TOKEN_TO_BE_REPLACED 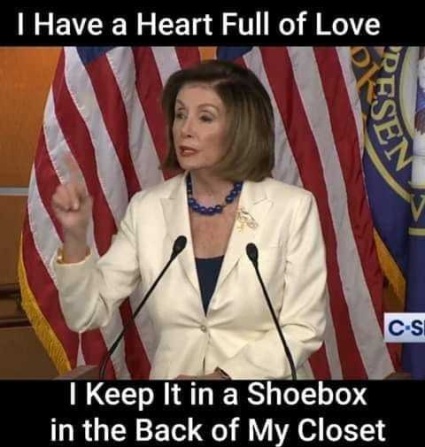 Attorney Lin Wood tweeted out his recommendation for how Trump should respond if Pelosi fails to promptly deliver the articles of impeachment to the Senate.

Comments Off on Responding to Nancy

SANTA PRAYING: This image was posted a year ago on Facebook: “I keep getting choked up with this photo. Today, after Santa visited our patients and was on his way out, he noticed our Chapel. He asked if he could go in and pray for the kids he just visited. I, of course, said yes. I didn’t walk in with him right away but when I did I was so moved by this image I had to capture it. What a great reminder of the reason for the season.”

END_OF_DOCUMENT_TOKEN_TO_BE_REPLACED

At this magical Christmas season of the year, it’s good to remember that Jesus told us to love our enemies, and to ask ourselves: “What the hell was that guy talking about?”

After all, when one thinks of all the years in which left-wingers branded us racist and deplorable and then scolded us for being uncivil whenever we fought back; when we think of all the times leftist institutions censored us and shouted us down and even staged riots to attack us and then claimed we were a threat to American freedoms; when we remember how they made movies and wrote books and articles mocking our patriotism and trying to insulate our enemies from criticism and then suddenly dragged out the flag when it came to overturning our votes with a specious impeachment plan — well, it’s easy to imagine it would be fun to drag some of these people out of the Capitol or the New York Times building, whichever was closer, tar and feather them, tie them to a rail, carry them down to the Potomac or the Hudson, whichever was closer, all the while cheering at the sight of their much-deserved humiliation, and finally hurl them into the river where they belong and point and laugh as they are swept out to sea in the debris-filled water while occasionally also pelting them with rotten fruit and vegetables and maybe a few crumpled up newspapers or maybe a few crumpled up anchor people from the news networks and did I already say we could point and laugh at them — I think I did — but there’s no reason we couldn’t point and laugh at them some more until they were finally washed out of sight leaving this great country they in no way deserve better, freer, richer, more powerful and more united than ever before.

I forgot where I was going with this.

Oh yeah. Jesus said love your enemies. So I guess we can’t do any of that.

Comments Off on Love Your Enemies