APPROVAL POLLS: To the surprise of no one who watched the impeachment hearings, it was precisely those hearings that killed support for impeachment.

DAMN DEMOCRAT LIES: Democrats have repeatedly misquoted President Trump’s remarks concerning his authority under Article II of the Constitution. They claim that he said the Constitution entitles him to do “whatever I want” as president.

But in context, his remark was clearly about his absolute right to hire and fire executive branch employees.

CNN and MSNBC have even used deceptively-edited video to support the Democrat’s false claim. Even worse, the House Judiciary Committee’s final report repeats the misquote times, then claims this “statement” he never made is an impeachable offense!

“[W]e consider President Trump’s claim that his actions are protected because of his right under Article II of the Constitution ‘to do whatever I want as president.’ This claim is wrong, and profoundly so, because our Constitution rejects pretensions to monarchy and binds Presidents with law. That is true even of powers vested exclusively in the chief executive. If those powers are invoked for corrupt reasons, or wielded in an abusive manner harming the constitutional system, the President is subject to impeachment for ‘high Crimes and Misdemeanors’. This is a core premise of the impeachment power.”

BILL OF RIGHTS: Republicans have pointed out that Democrats’ articles of impeachment punish the president for obeying the Constitution’s checks-and-balances. Democrats have also violated basic liberties protected by the First, Fourth, Fifth, and Sixth Amendments of the Bill of Rights.

House Intelligence Committee Chairman Adam Schiff (D-CA) violated protection against unreasonable searches and seizures (4th) when he obtained private phone logs of a journalist, a congressman, and the president’s personal attorney. When he published those logs, he violated the journalist’s protections under freedom of the press (1st). 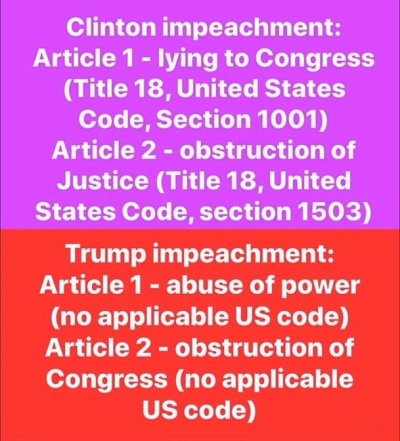 LEGAL OPINIONS: The second of the two charges involves the White House’s refusal to respond to House subpoenas.

The Department of Justice (DOJ) recently released several older legal opinions that back Trump’s position that the president’s executive privilege covers not just himself, but also his advisers who can thus refuse subpoenas from Congress. 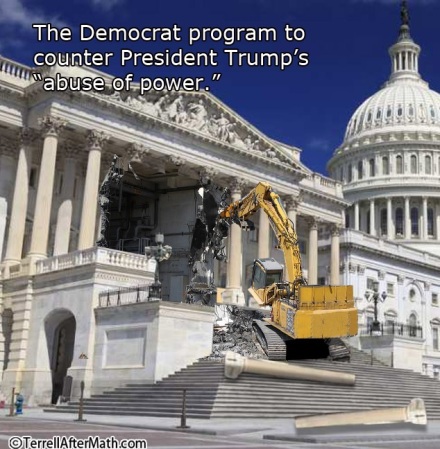 DEMOCRAT FLAILING: Now that Chuckie Schmucker has seen how weak the impeachment case is, he’s whining about “fairness.”

Riiiight … after the Democrat-majority House conducted most of its inquiry in secret while denying Republicans a chance to call witnesses!

“The Senate is meant to act as judge and jury, to hear a trial, not to re-run the entire fact-finding investigation because angry partisans rushed sloppily through it,” he said on the Senate floor. 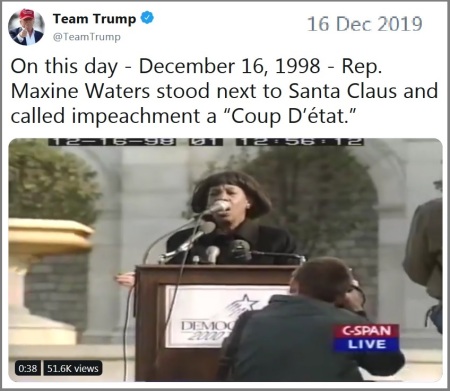 CON JOB: “The Impeachment Hoax is the greatest con job in the history of American politics!” President Trump wrote on Twitter on Dec. 16.

“The Fake News Media, and their partner, the Democrat Party, are working overtime to make life for the United Republican Party, and all it stands for, as difficult as possible!”

Comments Off on Impeachment News