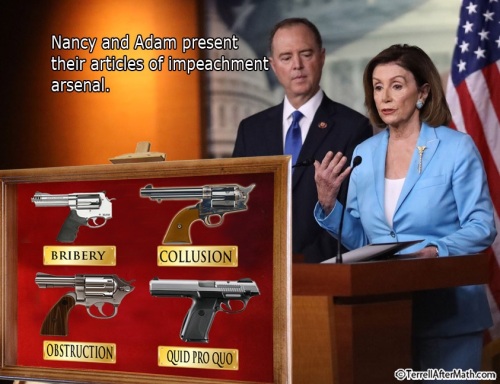 IMPEACHMENT: According to the article linked below, there’s a little-known precedent on the books that Democrats are trying desperately to have removed before the impeachment trial of President Trump begins. In 1974, as Nixon faced impeachment, the Republican Congress passed a law that would allow his term to be extended if he was acquitted.

The law was specific to Nixon, and was set to expire in 5 years, but Nixon resigned. The removal of the law, therefore, never happened.

According to legal analyst and constitutional scholar, Art Tubolls, the fact that the law exists at all sets a precedent.

Personally, I’d like to see some consequences for frivolous impeachment. It’s wasted so much of our time and money!

END_OF_DOCUMENT_TOKEN_TO_BE_REPLACED

BIBLE STUDY: “Upon arrival in Bethlehem it is likely Mary and Joseph turned to the family patriarch for lodging. This is of course inconsistent with the traditional understanding of the couple being turned away by the wicked innkeeper, a story founded on an inaccurate translation of a Greek word.

“The King James Version of the Bible, following even earlier traditions (as early as the Latin Vulgate), translated kataluma as inn in Luke 2:7. Kataluma, used also in Luke 22:7 and translated there as large upper room, seems to mean something like guest room.

“Considering that Mary had relatives in the area (earlier trip to visit Cousin Elizabeth) and Middle Eastern hospitality culture that would never turn away a relative, especially an expectant mother, it is safe to assume she was welcomed by her family. The phrase translated no room in the kataluma probably means the guest room was full as many other relatives were also in town for the census, disqualifying it as a reasonable place to give birth. …

“It is probable that when Mary’s time was near, she was helped to the storeroom, animals were shooed away, a manger (feeding trough) was refitted with fresh straw and a clean blanket, and baby Jesus was welcomed into the world assisted by the family matriarch and likely some of the other women relatives.”