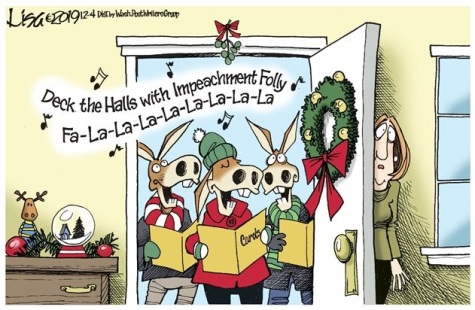 IMPEACHMENT: Speaker of the House Nancy Pelosi announced yesterday that she has asked “our chairman to proceed with articles of impeachment” against President Donald Trump.

INGRAHAM: Five Big Democrat Lies [5:58] – I’ve been thinking that, no matter what Pelosi does, we win.

HANNITY: The Democrats are in shambles [8:59] – Joe loses his cool when a voter challenges Hunter being on Burisma’s board while Joe was Obama’s point person on all things Ukraine.

IMPEACHMENT: Law professor comparing Trump to a monarch is ‘irresponsible’ [6:45] – The Trump campaign organization reports that fundraising and activism are both way up. And they’re both helping Republican campaign efforts even in states that they have written off in the past as lost causes.

DEBUNKING DEMOCRAT TALKING POINTS: Minimum wage is bad for workers and for the work force [9:36].

FAUXCAHONTAS: This is a good video to watch and share [7:09] – The Hive Queen wants to be the first president to be elected by popular vote. Yeah, no.

The United States of America is not a democracy. It is a constitutional republic. Democracy, which is ruled by popular vote, is poison for individual liberties. It’s what got Socrates condemned to death.

The other name for it is Mob Rule.