“We grieve that this tragedy we could have exploited for weeks on end was stopped by a good guy with a gun,” said one teary-eyed MSNBC reporter on the scene. “Our thoughts and prayers are with the shooter.”

“We are absolutely heartbroken and in shock over here,” said one New York Times journalist. “What could have given us weeks and weeks of frothing-at-the-mouth stories about gun control will now have to be suppressed since it does not align with our agenda.” 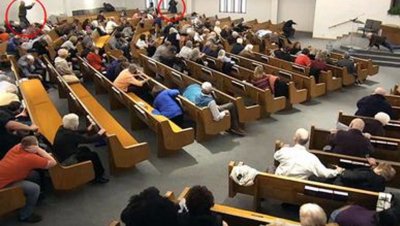 Excerpted from “A Response to the Editor of Christianity Today” about Mark Galli’s editorial calling for the impeachment of President Donald Trump.

The gist of the editorial — and of most religious and conservative opposition to President Trump — is that any good the president has done is dwarfed by his character defects.

This is an amoral view that says more about Galli than it does about the president. He and the people who share his opinion are making the following statement: “No matter how much good this president does, it is less important than his character flaws.”

This simplistic view of character is wrong and devalues how much Trump’s policies have benefited millions of people.

I do not know how to assess a person’s character — including my own — outside of how one’s actions affect others. Since I agree with almost all of President Trump’s actions as president and believe they have positively affected millions of people, I have to conclude that as president, Trump thus far has been a man of particularly good character.

Of course, if you think his policies have harmed millions of people, you will assess his character negatively. But that is not what never-Trumpers and the Christianity Today editor-in-chief argue.

According to them, Trump’s have indeed helped America (and even the world), but that this fact is far less significant than his personal flaws, whatever they may be.

Read the original (which is much longer) @ https://pjmedia.com/news-and-politics/a-response-to-the-editor-of-christianity-today/ 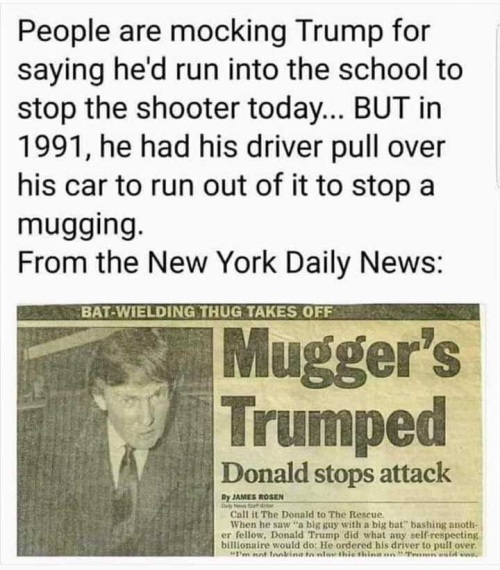 TRUMP: “Someone in the car looked over and said, ‘Gee, look at that, it’s a mugging,’ Trump said. ‘I said to my driver to stop the car because it was brutal-looking’.

“Witnesses told the Daily News that Trump got out of his black stretch limousine on Monday during the assault in Manhattan. Marla Maples, who was married to Trump in the ’90s, was seen grabbing his arm.

“The guy with the bat looked at me, and I said, ‘Look, you’ve gotta stop this. Put down the bat,’ Trump said. ‘I guess he recognized me because he said, ‘Mr. Trump, I didn’t do anything wrong.’ I said, ‘How could you not do anything wrong when you’re whacking a guy with a bat?’ Then he ran away.’”

END_OF_DOCUMENT_TOKEN_TO_BE_REPLACED

TODAY: I’m baaack! (Did anyone notice I was gone? LOL ) My puter had a glitch which, thankfully, was just a $30 fix.

Below is what I had scheduled for the 26th. As soon as that’s up, I have to start plowing through the 170 emails that piled up while I was cut off from humanity …

END_OF_DOCUMENT_TOKEN_TO_BE_REPLACED

Joy to the World!

“Christmas: the Son of God expressing the love of God to save us from the wrath of God so we could enjoy the presence of God.” – John Piper

END_OF_DOCUMENT_TOKEN_TO_BE_REPLACED

A blessed Christmas to all

END_OF_DOCUMENT_TOKEN_TO_BE_REPLACED

Excerpts from an article by Rob Natelson via The Epoch Times – Impeachment law isn’t for amateurs. It rests on English parliamentary history extending at least as far back as the 1300s. Furthermore, impeachment standards evolved over time. To understand the Constitution’s rules, we must know what the standards were when the Constitution was adopted. We can do so by consulting 18th-century parliamentary records and legal materials.

Here’s some of what they tell us: