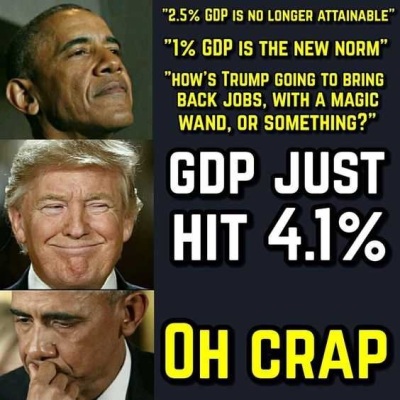 POLL: Two-thirds of people in six battleground states who voted for President Trump in 2016 but Democrats in the 2018 midterms are returning to the president for 2020, according to a surprising new The New York Times Upshot/Siena College survey.

The Times, being The Times, had to pooh-pooh these results: “This group is only a sliver of the electorate — 2 percent of registered voters — and is not representative of all voters. They are overwhelmingly white, 60 percent are male, and two-thirds have no college degree.” IOW, dumb rednecks.

The newspaper quoted seven voters who said they stand ready to vote Trump back into office — even those who voted for Hillary Clinton. The reasons they gave include:

“I’ve been in construction 21 years, and the last two years were the best years I’ve ever had.”

“[Trump’s] not exactly the person I’d have as my best friend,” a Hillary voter said. “But he’s a great president. Most politicians just talk about doing things, but Trump does them.”

“The harder [Democrats are] going after Trump, the more they’re just alienating people and pushing them away.”

NIKKI HALEY: Watch this one [19:02] – One of the great Democrat lies is that Republicans hate strong, intelligent women. Yeah. No. What I hate are pro-abortion, anti-God, anti-American, Tax-And-Spend women. I’d vote for Nikki Haley in a heartbeat.

ANA NAVARRO: [1:23] – Two different respected  polls are showing 34% of African-Americans approve of President Trump. CNN contributor, Ana Navarro tweeted, “Zero chance this is accurate. Zero. The poll must have only been conducted in the homes of Ben Carson, Kanye, that sheriff guy with the hat and those two Cubic Zirconia & Polyester-Spandex ladies.” Classy. NOT. 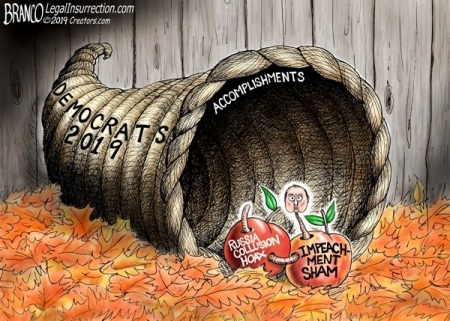 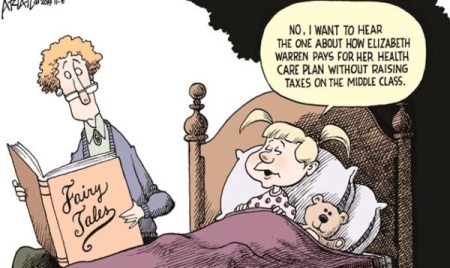 FAUXCAHONTAS: Democratic presidential candidate Elizabeth Warren’s September surge has evaporated. The number of Democrats calling her their “first choice” has dropped to it lowest level since August.

The decline began when rival candidate Pete Buttigieg criticized her for refusing to say if taxes would go up for Americans in the middle class under her “Medicare for All” plan.

FAIR SHARE: [5:33] – Democrats are all about high taxes and massive government spending. But the rich already pay far more than their fair share, while those at the bottom of the heap pay little or no income tax.

BERNIE: So much for that “fair share” crap – Bernie Sanders likes to talk about making billionaires pay their fair share. But during a campaign event in New Hampshire, Sanders revealed that he wants to raise taxes on pretty much everyone, including LOW-income Americans. 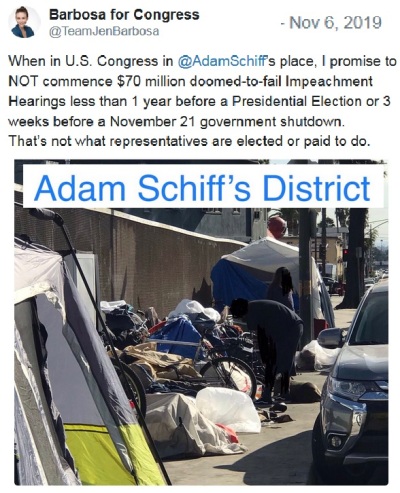 SCHIFF: Independent Jennifer Barbosa is challenging Rep. Adam Schiff (D-CA) for 2020 – “Since he became my congressman he has not presented any legislation that’s become law. In terms of homelessness, what he’s done is he’s basically rubber-stamped Maxine Waters’ bill to deal with homelessness, and her bill essentially replicated the same failed policies that [L.A.] Mayor [Eric] Garcetti has implemented in our city over the past few years. We know they’re not working. … We need to stop allocating federal funds for affordable housing which costs $500,000-700,000 per unit and really focus on mental health services for the people who are living on the street.”