Why did President Trump mention CrowdStrike when discussing Joe Biden with the Ukrainian president? 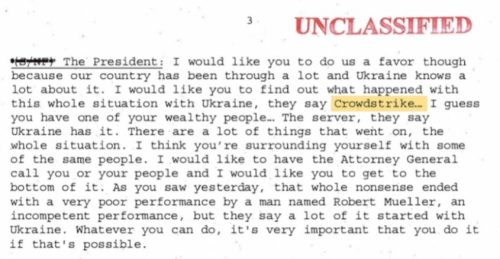 CrowdStrike is the cybersecurity firm that the Democratic National Committee [DNC] hired in 2016 to investigate the hacking of their servers.

CrowdStrike incorrectly reported that the DNC computers had been hacked by the Russians. The FBI did NOT investigate the DNC servers personally; they just accepted CrowdStrike‘s inaccurate report.

From 2014 to 2015, Ukraine’s largest private natural gas producer, Burisma Holdings, paid Rosemont Seneca Partners millions of dollars, allegedly to have Hunter Biden and Devon Archer serve on its executive board. Neither of these men had any expertise in either the Ukraine or in energy. What they did have was close personal ties to the top levels of the Obama administration.

Kolomoisky had such a reputation for lawlessness, violence and brutality that the U.S. government placed him on its visa ban list. He also controlled Ukraine’s largest financial institution, ProvatBank.

During the same period of time, the Ukrainian owner of Burisma Holdings, Mykola Zlochevsky, served in the Ukrainian government as the Deputy Secretary for Economic and Social Security on the National Security and Defense Council.

The Ukrainian government, Mykola Zlochevsky, and Burisma Holdings all have well-founded reputations internationally for corruption.

In 2017, Burisma Holdings signed a cooperative agreement with the Atlantic Council to promote international support for an energy independent Ukraine.

The Atlantic Council is a “center for informal get-togethers” of leaders from both sides of the Atlantic, with members working to develop “networks of continuing communication.” Members of its advisory board include:

NOW do you get why President Trump mentioned CrowdStrike when discussing Joe Biden with the Ukrainian president?