TRUMP: I am watching the first season of The Apprentice. Sadly, it’s the only season Netflix has. I’ve been impressed by two things in particular. One is that he’s in no way a racist or a misogynist. The other is that his penthouse apartment in NYC and his mansion in Westchester both make the White House residence look like a trailer park rental.

BERNIE: Sanders sneered at Trump for tweeting, “No debate on Election Security should go forward without first agreeing that Voter ID (Identification) must play a very strong part in any final agreement. Without Voter ID, it is all so meaningless!”

Never mind how RAAACIST it is of Democrats to insist that minorities aren’t intelligent enough to obtain ID.

MILLENIAL VOTERS: They’re outvoting Baby Boomers and a lot of them are Conservative [3:38] – This will help Trump.

Anthony @Scaramucci to @BillMaher: “You don’t really want a recession.” Maher: “I do. We have survived many recessions. We can’t survive another Donald Trump term.” NBC’s @RichardEngel: “Short term pain…better than long term destruction of the Constitution.” #RealTime pic.twitter.com/zJVRczTPJe

RECESSION: Democrats are such political pigs, they are actually hoping for the economy to tank – On Aug 14, the stock market dropped 800 points. Former Bill Clinton Labor Secretary Robert Reich tweeted that a recession would “help rid America of Trump.” 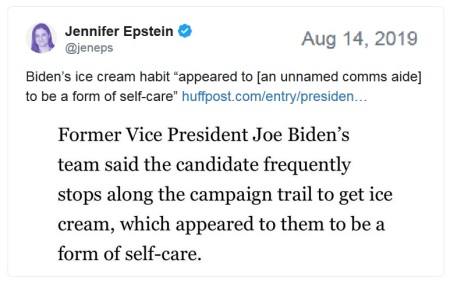 HYPOCRITES: When Bush golfed, he was shamelessly shirking his duties and when President Trump ate two scoops of ice cream for dessert, Leftists were appalled at his gluttony.

But when Obama golfed, he was wisely choosing the best possible relaxation a president could find. And now when Biden stop for ice cream on the campaign trail, he’s performing “self-care.”

GREEN NEW DEAL: Dems want to eliminate the use of fossil fuels for any reason – Norway took a stab at building an electric airplane. It crash-landed on a lake on Wednesday. Thankfully, the pilot and passenger both escaped unhurt.

LIARS: Elizabeth Warren and Kamala Harris both recently lied about the death of Michael Brown in Ferguson, saying he had been “murdered” by police.*

The left-leaning Washington Post gave them Four Pinocchios and the Massachusetts Chiefs of Police Association sharply criticized the false claims, stating they will “only serve to create hatred towards Police Officers and place them in danger of more assaults and perhaps death.”

Warren has refused to retract her statement.

*An independent investigation by President Barack Obama’s Justice Department, headed at the time by Eric Holder, found the officer acted in self-defense.

This morning, I’m announcing that I’m no longer running for President. While this campaign didn’t have the outcome we were hoping for, every moment has been worthwhile & I’m thankful to everyone who supported this campaign and our entire team.https://t.co/1ijSjkbzzd

HICKENLOOPER: He has dropped out of the race – Does anyone care?

SATIRE: From Andrew Klavan – Democrat presidential candidates have descended on Iowa, increasing the population there by 22 percent. As the candidates try to act like normal Americans by grilling corn dogs on a flaming flag or staging sack races with people who were sacked during the Obama economy, voters are trying to choose whether to hear the stump speeches or just jab a screwdriver repeatedly into their ears to see if that’s less painful.

Beto O’Rourke has seen his poll numbers rise since a drunk in Cedar Rapids said he’d vote for Beto then passed out before he could explain that he meant to say Biden and always gets those two confused. O’Rourke has tried to change his campaign tactics by limiting his speeches to a series of outlandish hand motions wholly disconnected from any meaning he may be trying to convey. O’Rourke tried to explain this tactic to a reporter but knocked her unconscious with a non-sensical gesture before she could understand what he wasn’t saying.

Bernie Sanders attended a nail salon with Cardi B as part of his strategy to make socialism seem fun, or at least more fun than the part where you’re roasting your pet cat over a trash fire so your children have something to eat. Cardi B says she thinks socialism will be great as long as her nails look terrific and all the socialism stuff is happening to someone else. The 103-year-old Sanders promises that under socialism Cardi will be able to afford a complete last name and then maybe he’ll know who she is.

Voters thought they spotted Elizabeth Warren outside a cigar store in Des Moines, but that turned out to be only a wooden Indian. However, Warren did show up at a rally later where she led the crowd in a rousing rendition of “This land is my land — No Really, It’s My Land.” She then threatened to scalp the bystanders but Bernie Sanders had already done that.

Political observers say the Democrat campaign is likely to continue until Donald Trump is re-elected.