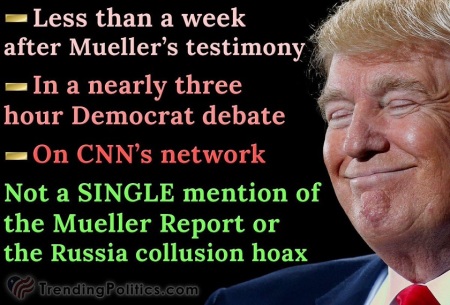 BRUTALLY BORING: Legal Insurrection’s William Jacobson said the second debate killed off some of his brain cells. Also, “If I were a Democrat watching tonight, I’d be deeply depressed.” Hee hee.

Decriminalizing border crossings, Medicare For All, healthcare for immigrants…all unpopular with voters. pic.twitter.com/TIMyCGdKZN

POST DEBATE POLLING: Democrats are caught between a rock (their base) and a hard place (the rest of the country) – Democratic primary voters strongly support a host of whacko leftist policies that the majority of us who will be voting in November 2020 reject.

AD: The liberty-oriented Protect Freedom PAC ran this “Stop Socialism” ad in New Hampshire during the Democratic primary debates airing on CNN on Tuesday and Wednesday.

This is a real question CNN "journalist" Don Lemon asked tonight at the #DemDebate:

"What do you say to those Trump voters who prioritize the economy over the president's bigotry?"

DON LEMON: This absurd question by the debate moderator should be enough to let you skip the rest of this post. ::eyesrolling::

But in case you care, here’s what I would say, provided I was confrontational enough to do anything more than snark at Democrats here in my safe space, PoliNation bubble …

“Trump’s alleged bigotry is FAKE NEWS that is being pimped out daily by Democrat politicians, Democrat media shills (like Don Lemon), and Trump-hating celebrities. The Trump Economy is not only very REAL, but according to the polls, a lot more important to voters than anything apart from the threat posed to our nation by illegals.”

THE PARTY OF SCIENCE: If black holes and stars going nova don’t threaten our universe, I’m pretty sure that a small increase in the global mean temperature of Planet Earth will not faze it.

BTW, if you try to go to the web address Slow Joe announced, as many did, you will be redirected to https://joshforamerica.com/, a joke website set up by a Syracuse University student who announced his “candidacy” on April 1. Within moments of Biden garbling his website address announcement, Josh and a friend bought the address for themselves.

Supposedly the redirect was removed. I dunno if that’s even legal, since Josh bought that URL and should presumably be allowed to use it however he chooses. Anyway, when I put “Joe30330” in, I got a dead page. But when I put in Joe30330 dot com (done correctly), I got the redirect. In fact, when I tried to put Joe30330 dot com (done correctly) here, the URL that appeared as a hot link (above) was Josh For America.

According to Josh’s funny announcement [1:01], his “campaign” is backed by the Josh For America Excretionary Committee.

Tulsi takes down Kamala Harris over her record on criminal justice reform, the death penalty, and the war on drugs -TULSI2020 #DemDebate #Tulsi2020 https://t.co/7XQoiqHThu pic.twitter.com/epf58iQNYI

GABBARD: Kamala Harris looks like she is about to cry. Watch with sound off. Hard swallowing. Looking down (subconscious shame). Face wincing (verbal blows landing).

Pete Buttigieg says you're a bad Christian if you don't support a higher minimum wage.#DemDebate pic.twitter.com/K0lu1xZaNq

MAYOR PETE: Democrats love to quote scripture out of context, while ignoring everything that says homosexual acts are sinful and abortion is evil.

And, BTW, Pete … there is abundant evidence that raising the minimum wage hurts the POOR by eliminating the entry level jobs they need and by raising prices on the disabled and elderly who must subsist on fixed incomes.

Cory Booker calls out Biden's dividing up of immigrants, and calls out Trump's "shithole" countries comment. It was NOT bleeped. #DemDebate pic.twitter.com/x7WH6PHxGe

SPARTACUS: During the debate, Booker used a term on live television that he once soundly condemned Trump for having reportedly used in a White House meeting.

2 responses to “The Latest Democrat Debates”