Even if you don’t factor in inflation, reducing the cost of each fighter from over $100 million to less that $80 million halfway through his first term is a major accomplishment for Trump.

.@realDonaldTrump is transparent…that’s why people love him….He’s not going to be impeached. The bottom line is the democrats hate his style and they hate him. I'm here to tell you- his legacy will be decided at the polls—not in congress or in the courts. #OpeningStatement pic.twitter.com/65Y8kwX8Eu

.@LindseyGrahamSC reacts to the Opening Statement and the latest regarding Iran. pic.twitter.com/r5VeJeaUbb

FIGHTING FOR THE HEART and SOUL of the NATION: Former Oakland Raider Burgess Owens testified before the House Judiciary Subcommittee on the Constitution, Civil Rights, and Civil Liberties today on the subject of slavery reparations. This is worth your time! [5:43]

SPYGATE: I reported on this yesterday, but I like watching Lou Dobbs and Tom Fitton, so here it is again. [5:10] 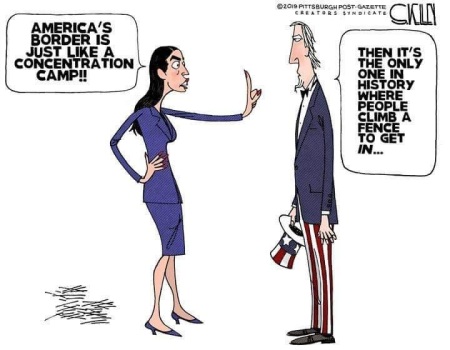 BORDER CAMPS: Art Arthur, a resident fellow at the Center for Immigration Studies (CIS) and former immigration judge, refuted Rep. Alexandria Ocasio-Cortez’s (D-NY) characterization of U.S. migrant detention facilities as “concentration camps,” calling her comments “offensive” and noting that Democrats had no objection to these same facilities when the Obama administration used them.

What is truly “reprehensible,” Arthur said, is the refusal of Congressional Democrats like Ocasio-Cortez to provide the humanitarian funding requested by the Trump administration to alleviate the suffering of migrant children and families.

YAD VASHEM: Wins Tweet of the Day! – Will AOC concede or will she double down and try to tell us that the Esquire article she linked to in her original tweet is more accurate than Yad Vashem? I wouldn’t put money on this either way.

"The problem is under current law, once the kids come across the border, there’s a system in which we’re supposed to process them, take care of them…

Our message is absolutely don t send your children" pic.twitter.com/orOGHaUSGB 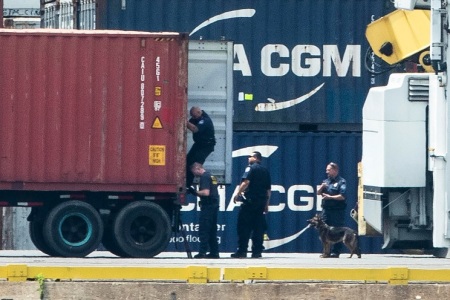 MASSIVE DRUG BUST: Federal authorities intercepted a record 16.5 tons of cocaine onboard a ship at the port of Philadelphia Tuesday afternoon. The drugs have a street value of $1 billion. Members of the ship’s crew have been arrested and federally charged as the investigation continues.

PROJECT VERITAS: Score another WIN for O’Keefe and crew!

HILLARY: A Broadway production based loosely on Hillary Clinton’s first failed presidential run back in 2008 is closing down a month early due to deplorable ticket sales. The play has netted an average of about $7,000 per show.

I just checked and found most seats for the last few performances are selling for $129 each. If that’s been true all along, then there were an average of only 54 of the 800 available seats filled per performance. Deplorable indeed!

TRANNIES vs TITLE IX: Three girls from a Connecticut high school have filed a federal discrimination complaint against a statewide policy on transgender athletes. The girls say that these policies caused them to miss out on top finishes in races that could have led to college scholarships.

“Girls deserve to compete on a level playing field. Women fought long and hard to earn the equal athletic opportunities that Title IX provides. Allowing boys to compete in girls’ sports reverses nearly 50 years of advances for women under this law. We shouldn’t force these young women to be spectators in their own sports.” – Christiana Holcomb, legal counsel for Alliance Defending Freedom, which is representing the girls

DISNEY: Yikes – Michael Laney, 73, former Vice President of Walt Disney, had been found guilty of raping a 7-year-old. He’s been sentenced to nearly seven years in prison. In addition, he will have to register as a sex offender and pay a $4,000 fine.