PHOTO TAKEN BY ONE OF MY OFFSPRING: Text msg – “A perfect circle rainbow around the sun. And no rain. God is amazing and so is his art!”

MIRACLE VIOLINIST: In 2004, Japanese nursing student Manami Ito lost her right arm in a traffic accident. Inspired by other amputees using prosthetic limbs to do the things they loved, she went back to nursing school (she is the first nurse in Japan to have a prosthetic), became a world-renowned Paralympian swimmer and returned to playing her beloved violin. [3:13] 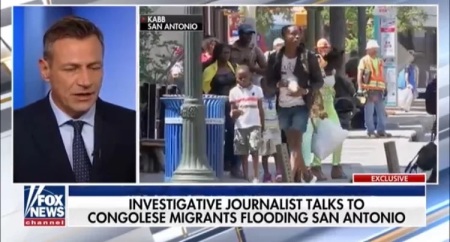 BORDER: Hundreds of illegal aliens from Ebola-stricken Democratic Republic of Congo were dumped in the streets of San Antonio, Texas a couple of weeks ago.

BORDER: President Trump announced that ICE would begin removing “millions of illegal aliens” as soon as next week.

In addition, the State Department said that the administration would cancel all future economic aid to the countries of El Savador, Guatemala, and Honduras until “concrete actions” are taken to reduce the number of illegal migrants coming to the U.S. border.

The Obama era officials named are Victoria Nuland (then Assistant Secretary of State) and Jonathan Winer (then State Department Special Coordinator for Libya).

We now know that Nuland and Winer both worked on circulating the Steele dossier with Daniel Silverberg who was then national security adviser to then House Minority Whip, Rep. Steny Hoyer (D-MD).

Winer has been implicated before for having worked with Christopher Steele and Clinton associate Sidney Blumenthal on the dossier.

LIBERAL HYPOCRISY: A black reporter with Fox News attended one of MoveOn’s Impeach Trump protests. While he was asking people why they were there, a white liberal approached him and told him to go back to Kenya. Another one of those oh-so-tolerant, diversity-loving, Trump haters told him to go pick cotton.

IVY LEAGUE HYPOCRISY: Harvard University has rescinded their acceptance of Kyle Kashuv to attend the university this fall because of racially offensive private messages he sent at age 16.

Kashuv, a survivor of the mass school shooting in Parkland, FL, in February 2018, had disavowed the comments as reckless attention-seeking mistakes of his childhood.

“If any institution should understand growth, it’s Harvard, which is looked to as the pinnacle of higher education despite its checkered past,” said Kashuv, noting that the university once had slave owners on its faculty.

CLINTON EMAILS: The State Department has identified “multiple security incidents” involving current or former employees’ handling of Hillary Clinton’s emails, and that 23 “violations” and seven “infractions” have been issued as part of the department’s ongoing investigation. 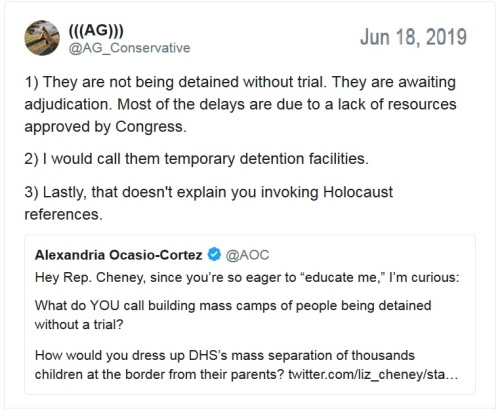 AOC: Dishonest as ever – “This administration has established concentration camps on the southern border of the United States for immigrants, where they are being brutalized with dehumanizing conditions and dying.”

Naturally when faced with the inevitable blow back from those who are getting sick and damn tired of the endless comparisons to the Nazis, AOC kept digging.

Some of the responses:

“The only reason to use the term ‘concentration camp’ is to evoke Nazism and we all know it. So just stop.”

“If you weren’t talking about the Holocaust then why did you mention ‘never again’?”

“Keep talking. You’re one of the GOP’s most valuable assets.”

BAKE THE CAKE: In another win for Christian rights, the Supreme Court has sent an Oregon-based case back to a lower court for further consideration in light of their earlier Colorado decision in favor of a Christian baker.

The Colorado baker is still in business, but the small Oregon bakery was forced out of business after a state agency fined the Christian owners $135,000 for allegedly violating the state’s public accommodation law.

I hope they win a big enough settlement from Oregon so they can return to doing what they love.

He’s also a registered Democrat and an advocate for gun control and healthcare reform who’s been severely critical of the Republican Party on Facebook since Trump became president.

He said during his trial that he his attack on Senator Paul was triggered by his rage over Paul stacking his own yard waste near Bouchard’s property line. The assault left the senator with several broken ribs and a hernia.

According to court documents, Rene Boucher has sold his five-bedroom home in Bowling Green so that he can pay the $382,000 he now owes to Sen. Paul as part of the verdict.

Boucher pleaded guilty to assaulting a member of Congress, and served 30 days in federal prison. He was also sentenced to a year of supervised release, 100 hours of community service, a $10,000 fine, and was also ordered to pay Paul more than $600,000 for pain and suffering, and not to have any intentional contact with Paul or his family.

Boucher has filed a lawsuit against his homeowner’s insurance company, claiming the company “refused to provide him [Boucher] a defense for the bodily injury claim (that) Paul leveled against him.” He included Sen. Paul in the suit; Paul is asking for the suit to be dismissed.

The article didn’t say, but I’m guessing the insurance company will also, seeing as this jerk’s homeowner’s policy certainly would not have included coverage for damages inflicted while assaulting a neighbor.

ABORTION: Texas Gov. Greg Abbott signed a law Friday that requires abortion practitioners to provide basic medical care to infants who survive abortions. It allows third-degree felony charges and a fine of up to $100,000 for violations.

Democrats opposed the bill and were so rude, they actually boycotted a hearing at which several abortion survivors were scheduled to speak. I guess that, according to them, these articulate, intelligent adults are non-persons, because their mommies wanted them dead. 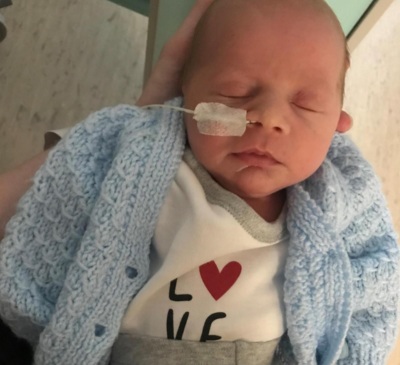 SO MUCH WIN: A Scottish mother who ignored medical pressure to abort her unborn baby has given birth to a healthy boy.

NOTRE-DAME: Archbishop Michel Aupetit of Paris wore a hard hat for protection while celebrating Mass in the Chapel of the Virgin inside Notre Dame Cathedral on June 15, 2019. It was the first Mass since the fire.

WALKING: A recent study of walking among older women found:

As few as 4,400 steps/day was significantly related to lower mortality rates compared with approximately 2,700 steps/day.

While total steps per day was related to lowering mortality rates, the intensity of steps was not.

I routinely track my walking by distance, not steps, so I measured my gait and found that I walk about 3,840 steps/mile. Therefore, my goal range (2,700 to 7,500) is .7 miles to 2.0 miles per day. Just getting from here to there in the house and leisurely strolling with Daisey and Dearest count. 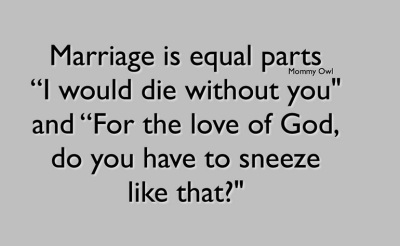