D-DAY: 75th anniversary – On June 6, 1944, Allied forces stormed the beaches of Normandy in northern France. Their goal: to liberate Western Europe from Nazi tyranny. From a distance, it might seem that victory was pre-ordained, but no one felt that way at the time. British military historian Peter Caddick-Adams tells the incredible story of what happened on that monumental day. [5:37]

UK: President and Mrs. Trump gave Queen Elizabeth the Tiffany brooch pictured. For Prince Philip, who became a pilot for the Royal Air Force in 1952, they had a first-edition signed copy of I Could Never Be So Lucky Again, the autobiography by aviation pioneer James Doolittle.

I loathe giving the previous inhabitants of the White House any space in my brain or blog, but their UK gifts need to be remembered.

In March 2009, they gave UK Prime Minister Gordon Brown a box of 24 classic American films on DVD’s that were coded for the United States and unreadable by UK DVD players.

In April 2009, they gave Queen Elizabeth an iPod that was pre-loaded with photos from the inauguration and audio files of his speeches. The queen reportedly already had an iPod.

BROWARD COWARD: Former Sheriff’s Deputy Scot Peterson, who refused to stop a mass shooting, has been charged with seven counts of neglect of a child, three counts of culpable negligence, and one count of perjury.

Authorities set Peterson’s bond at $102,000. If convicted on all the charges, he could be sentenced to as much as 97 years in state prison. But if t.v. dramas are correct about the way felons treat dirty cops, I’m guessing he’ll be lucky to make it to trial.

BORDER: Oh noes! – CLEARLY, we should leave the border wide open to drugs and human traffickers, because GUACAMOLE! Do any of the dimwits objecting to tariffs to protect our national sovereignty catch the irony in their simultaneous support for mandatory $15/hr minimum wage which, you know, raises prices on stuff like fast food? 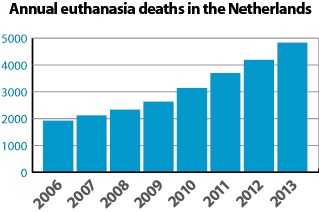 THE NETHERLANDS: This is just horrifying – It is legal in The Netherlands for children as young as 12 to be legally euthanized for unbearable pain. This week a 17-year-old girl decided that the emotional pain she has experienced as a result of being sexual assaulted was “insufferable” and the state obliged by putting her to death.

Dr. Gordon MacDonald, the head of Care Not Killing, a group based in the U.K. that opposes euthanasia and assisted suicide said, “This happens, because once you accept that some lives are not worthy of protection and should be ended, it is only a question of which lives and what conditions should qualify for assisted suicide, or euthanasia.

“In Holland, where this latest tragic case has taken place, there has been a steady increase in the number of euthanasia deaths, which in 2017 accounted for more than 4% of all deaths. At the same time we have seen a dramatic escalation in the range of conditions, which meet the medical and legal threshold.”

My family has a disabled Dutch friend. She told us that once, when she was having a bad day, her house cleaner said, “Why don’t you just die and spare us all.”

This PBS documentary airbrushes abortion to make it look like some healthy new age practice.

The women in blue is pregnant with twins and she is filmed here taking the abortion pill to kill them. You witness their killing😢
And her statement at the end is chilling. pic.twitter.com/NxL7w36hYI

ALSO HORRIFYING: IF you decide to watch the tweeted video above, grab a barf bag, because it is really disturbing – Betcha Twitter doesn’t ban it for “disturbing content” the way they have done to multiple pro-life videos, ads, and accounts. Cuz their idea of “disturbing” is anything that dignifies the humanity of the unborn. [1:57]