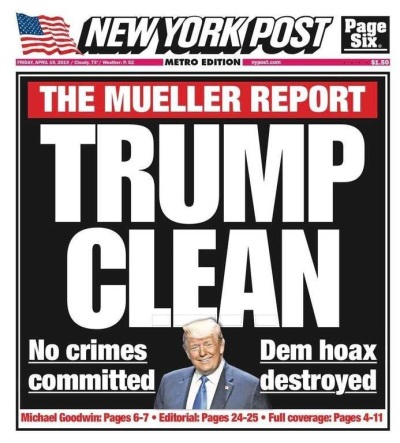 “If Mueller could, he and his partners and team of Democratic donors and Hillary lovers, would have found crimes. But now, with zero introspection, no self-reflection, no apology, it’s just on like it never happened in the mainstream media. Let’s go to the next pack of lies, the next round of breathless reporting, the next manufactured scandal to destroy Trump. It’s a psychotic rage in every so-called newsroom in America, all while ignoring simultaneously what is the biggest story in their careers and lifetime because of their blind adherence to rigid left-wing loving Hillary ideology.

“So it’s no shock that just as we predicted yesterday, the media mob and their echo chamber, they are back in action with one last full on hysterical freak-out over the Mueller investigation after the president was cleared of collusion.

“Remember this: If the president wanted to sink the special counsel investigation, he had Article 2 authority under the Constitution. He could have personally fired Robert Mueller or anyone else for that matter. But the president did not fire Mueller or Rosenstein or Weissmann or Jeannie Rhee, or any other Clinton donors and allies investigating this sham, this campaign. The president took no action to impede the prosecution of Lt. Gen. Michael Flynn or Paul Manafort or George Papadopoulos or anyone else.” 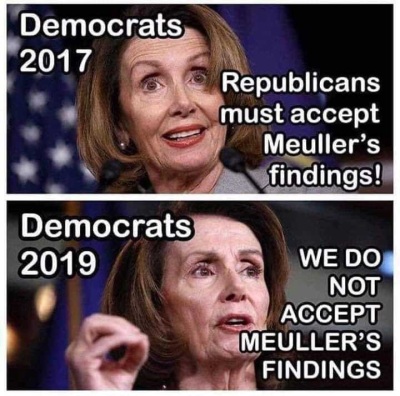 DIGENOVVA at Fox News – “While the Democrats continue to cling to the fantasy that evidence of collusion really is lurking somewhere in the dark recesses of the Mueller report, the report itself makes it clearer than ever what any unbiased observer of the Russia story has been able to see for more than a year: Robert Mueller knew very early on in his investigation that there was no collusion.

“The rest of the investigation, as far as the president and his inner circle are concerned, was spent trying to find a way to frame President Trump’s legitimate outrage over this attempt to nullify his election victory as ‘obstruction of justice.’

“There was no obstruction of justice. Mueller himself had to know that, which is probably why he refused to charge anyone with it, entirely separate from considerations of whether the Justice Department has the authority to indict a sitting president, which it does not.

“All there was, as we can now clearly see, was a rational reaction by a president who realized just how much of a mess his FBI Director and Deputy Director had made of the Clinton email investigation and saw the same people wasting taxpayer money on a politically-motivated investigation into something he knew all along was a baseless conspiracy theory.”

IT AIN’T OVER: In the Democrat-controlled House, freshman Rep. Rashida Tlaib (D-MI) has cooked up a resolution to impeach the president. Fellow whackadoodle freshman Rep. Alexandria Ocasio-Cortez (D_NY) is the biggest name to sign on so far.

In the Republican-controlled Senate, the leadership has said they plan to look into how the Obama administration handled the fact that they knew that Russian operatives were trying to interfere in our election. What did they do to investigate or stop it?