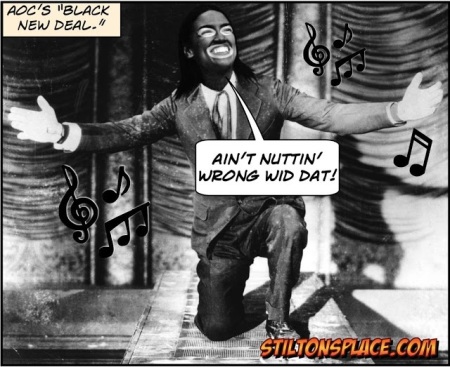 Although we hate giving dimwits more time in the spotlight than they deserve, AOC has once again offered us too tempting a target to resist.

Specifically, she has entered the ranks of those political figures who suddenly lapse into a broad Amos & Andy dialect when talking to African-American audiences in order to seem more “black.” Interestingly, this overtly racist affliction only seems to strike liberals. …

In this case, Ms. Occasionally-Colored was addressing a predominantly black audience when she was suddenly overcome by the urge to speak in a southern drawl seasoned with just a soupcon of Ebonics. Reacting to President Trump’s dismissal of her as a “bartender,” she defended her former (and future) profession by declaring “Ain’t nothin’ wrong wid dat!” while waving jazz hands.

She then further demonstrated her deep understanding of black culture by assuring them – still in Stepin Fetchit mode –  that there was nothing wrong with their holding jobs like “folding clothes for other people to buy,” or “preparing the food that your neighbors will eat,” or “driving busses.” In fact, it seems like there “ain’t nothin’ wrong wid dat” about any kind of manual labor for black Americans, as long as they leave all the fancy thinkin’ jobs to the progressive massahs in charge of the new plantation state.

Of course, part of that fancy thinkin’ by the Leftists is to flood our country with so many illegal aliens that the humble, but thoroughly respectable, jobs she listed will be out of reach to those in black communities who were hoping to enter the job market and start climbing the economic ladder.

Still, if they vote the right way, there will always be a trickle of cash heading their way from Washington.

But there ain’t nothin’ right about it.