LENT: A 40-day period of unity with “the mystery of Jesus in the desert” designed to prepare us for Easter.

By praying, fasting, giving to charity, sacrificing small things, and abstaining from meat on Ash Wednesday and all Fridays in Lent, we strengthen ourselves to resist Satan’s temptation and fulfill the missions God has given us.

Because every Sunday is a feast day to celebrate the Resurrection, the Sundays during Lent are not part of the 40 days of Lent.

TRUMP ECONOMY: “Our economy is so strong that more than a million American households are no longer dependent on food stamps, and newly employed workers can proudly say that President Donald Trump is the reason they can feed their families without government assistance. …

“The massive decrease in the number of Americans who depend on food stamps directly contradicts the liberal lie that Trump’s economic agenda helps only the rich.”

GOP @RepKinzinger, who deployed to the southern border, will meet with the President today.

He says the situation "is deserving of a national emergency, not because of the immigration issue but because of the drugs and human trafficking,” he says. https://t.co/6QB85uIS1z pic.twitter.com/DQjK5egH6l

BORDER CRISIS: The inflow is overwhelming our resources – Yesterday, the Department of Homeland Security released staggering numbers that put these stories in context. American law enforcement officers are apprehending more than 2,000 aliens every day at our Southern border.

All told, U.S. Border Patrol has apprehended over 268,000 individuals since the beginning of this fiscal year in October—a 97 percent increase from the previous year.

The ongoing humanitarian and security disaster at our border shouldn’t be a partisan issue. Too bad the Democrat leadership in DC is too dumb or too corrupt to understand this.

THE NEW SOLIDARITY MOVEMENT: I encourage you to give the 8 or 10 minutes it will take for you to read this entire article. It’s really worth it. Excerpt –

“Like the old Communist nomenklatura, the members of this globalist network also pretend to care about ordinary people but are actually engaged in the largest transfer of wealth, from the many to the few, that the world has ever seen.”

PREVENTS INITIATIVE: An average of 20 veterans a day kill themselves – President Trump has signed an Executive Order on the “President’s Roadmap to Empower Veterans and End a National Tragedy of Suicide” — the PREVENTS Initiative.

The order establishes a task force that includes the Secretaries of Veterans Affairs, Defense, Health and Human Services, and Homeland Security. The job of the task force will be to develop a comprehensive public health roadmap toward ending the national tragedy of veteran suicide.

TUCKER CARLSON: Too dumb to die — After two years, the Russian conspiracy is dead. But nobody in DC appears to have noticed. 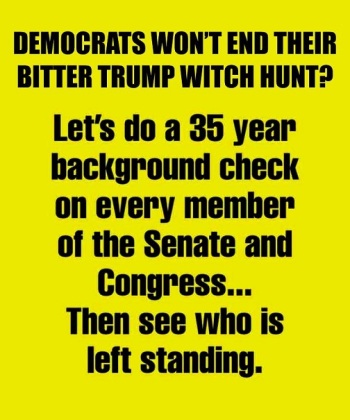 FISHING FOR DIRT: They’ve got no evidence of wrong doing, just a burning desire to find a way to destroy Donald J. Trump –

House Judiciary Chairman Jerry Nadler (D-NY) admitted on CNN that there is no evidence Trump obstructed justice but he launched a massive investigation anyway because it’s his ‘personal opinion’ that Trump may have violated the Constitution.

Q: “Do you have any comment on the FEC violation filed against your office?”

Q: “Do you think that’s a sign of you taking dark money?”

From Twitchy: “The best defense she seems to have is that she was completely ignorant of what was going on with her campaign finances, which doesn’t make us anxious to hand over $94 trillion for her Green New Deal.”

CNN and MSNBC have ignored the story. 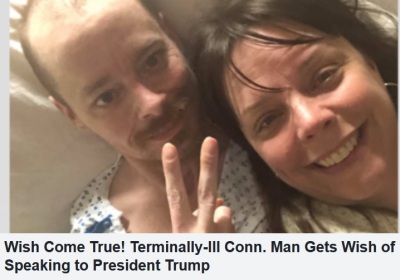 CLASSY: President Donald Trump fulfilled a terminally ill man’s dying wish by calling him on the phone on Tuesday evening, saying it was “an honor” to do so. The man really wants to hang on long enough to vote for Trump in 2020, but his doctors don’t think he has that long left to live.

TUCKER CARLSON: Hundreds of college courses do nothing more than indoctrinate students in Leftist philosophy and theology. American college grads hold $1.5 Trillion in unpaid student debts, maybe because 40% of them are un- or under-eremployed. 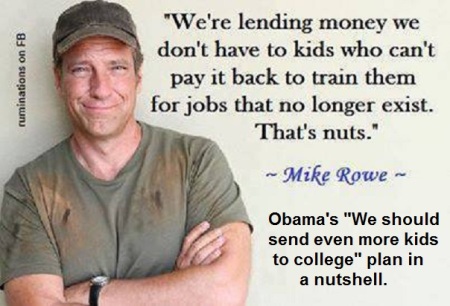 RACISM GONE WILD: Because Leftists can’t accept that Blacks have made it – Will Smith has been selected to play the role of real-life individual Richard Williams, the father of tennis stars Serena aand Venus Williams.

The same people who have been just fine with Alexander Hamilton being played by a black actor are kicking up a stink because … wait for it … Smith’s skin isn’t DARK ENOUGH.

This wasn’t an issue when Denzel Washington played Malcom X, whose skin was considerably darker than the talented actor’s skin. But then, that movie was made way back in 1992 during a deeply unenlightened and even more racist time in our nation’s history.

EDUCATIONAL MALPRACTICE: The Left’s assault on reality and the traditional Judeo-Christian values that support reality continues – Last week, the president of the nation’s largest teachers’ union joined a man who identifies as a woman in teaching transgender ideology to a KINDERGARTEN class.

LGBT activists want to make it illegal for therapists who hold Biblical views of sexuality and gender to encourage children to embrace their biological sex. They expect legislative victories in at least four states this year: Colorado, Maine, Massachusetts, and New York.

The Left’s rush to embrace gender dysfunction ignores the ever-growing evidence that many trannies deeply and increasingly openly regret having undergone hormone therapies and mutilating surgeries.

More than 40% of trannies who have surgery attempt suicide afterwards. A Swedish study in 2011 found that those who undergo sex reassignment surgery actually have a “considerably higher risk for mortality, suicidal behavior, and psychiatric morbidity.”

Canada is seeing an exponential growth in demand for transgender treatment from teens. Despite the fact that this spike is unprecedented, physicians don’t seem to be too concerned about why it is occurring, suggesting we can add “medical” to that “educational” modifier above.