DEMOCRATS ARE LOSING THIS ONE: Just one month after Democrats openly promoted, legislated, and even cheered for legal abortion up to birth and even after, new polling data shows that 17% of Americans moved from self-identifying as pro-choice to calling themselves pro-life. This is the largest shift in history.

BORN-ALIVE COMES UP SEVEN VOTES SHORT: On Feb 25, the United States Senate voted on the Born-Alive Abortion Survivors Protection Act. The legislation, which needed 60 votes to pass, failed by a vote of 53 in favor and 44 against. Only three Democrats voted in favor: Doug Jones, Joe Manchin, and Bob Casey Jr.

DEMOCRATS: Health care for all … except babies who survive abortion.

But when she tried to get her money back and leave, they locked the doors and told her she had to sit inside for a while.

“You know what, we’re going to keep half your money so that you have a down payment in case you want to come back and get your abortion sometime over the next couple of weeks.” 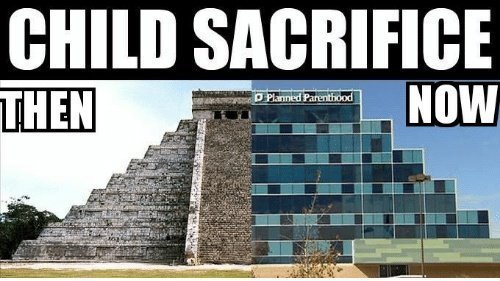 UNPLANNED: The movie of the life story of Abby Johnson, a former Planned Parenthood worker turned pro-life activist, has unexpectedly received an R-rating from the Motion Picture Association of America (MPAA).

The MPAA cites the reasoning for the rating as “some disturbing/bloody images” but Ben Kayser of Movie Guide has stated that other 2019 films that include killing, murder, and death have only received a rating of PG-13.

While Unplanned features simulated abortion scenes that include blood, it doesn’t contain any of the MPAA cautions for profanity, nudity, or sex. Therefore, the MPAA decision to give the film an R-rating is quite possibly because of the abortion scenes — and the MPAA’s opinion that these scenes depict violence.

HE CHOSE WISELY: After his son was born with Down syndrome, Samuel Forrest had to live through a heart-wrenching choice: either put him up for adoption or watch his wife walk out of his life. “They took me in to see him and I looked at this guy and I said, ‘He’s beautiful. He’s perfect, and I’m absolutely keeping him,'” he said. His wife filed for divorce. Yet only four percent of parents who have children with Down syndrome regret keeping them. And no less than 99 percent of people with Down syndrome say they are happy with their lives.

IF THE PREBORN ARE PATIENTS: Doesn’t it follow that they are also persons — An OB/GYN describes how heart surgery, spine surgery, and blood transfusions are now routinely performed on the pre-born while in the womb. In the video below, Lile says that “the mom is a patient, and the baby is a patient.” The mother’s body, he says, doesn’t see the baby’s body as just another one of her organs — which is so often the implication of pro-abortion slogans such as ‘my body, my choice’ — but as a “foreign entity.” Sometimes, he adds, the mother’s body even makes antibodies against the baby.

MISSOURI: A federal judge has ruled that a state law requiring abortionists have admitting privileges at a local hospital does not constitute an “undue” burden on women seeking abortions.