ROSENSTEIN OUT: On Monday night, Sean Hannity announced dirty cop Rod Rosenstein will step down as Deputy Attorney General by mid-March. Jeff Rosen was picked as his replacement. Rosen is the current deputy at Transportation.

TRUMP SLAMS SOCIALISM: “The days of socialism and communism are numbered, not only in Venezuela, but in Nicaragua and Cuba as well,” President Trump told a crowd gathered in Miami. “Socialism by its very nature does not respect borders. It does not respect the boundaries or the sovereign rights of its citizens or its neighbors. It’s always seeking to expand, to encroach, and subjugate others to its will.”

ELDERLY WHITE MALE WANTS TO HEAD UP DEMOCRAT TICKET – Bernie Sanders, 77-year-old failed prez wannabe, has announced he’s running again. Doesn’t this man know the meaning of the word “retirement”? The aging spox for Unrestricted Abortion and Socialism In America is a billionaire who owns three homes, so yeah, no hypocrisy there. ::smh::

Child care should be a fundamental right, period. I remember how hard it was to find affordable, high-quality child care for my two kids when I was a working mom – and it's a zillion times harder today. Here’s how my #UniversalChildCare plan works. https://t.co/YAFGzqZ0hX

RIGHTS THAT DON’T EXIST: Fauxcahontas finds another one the government should make “universal” – HINT: It’s not in the Constitution like, you know, the right to bear arms, which Warren says is not a right.

When I was in Moscow in 1972, our tour guide told us about the Soviet Union’s universal, government-controlled, child care. She hated it. She wanted more than anything to be a SAHM to her 3 yo daughter. But the “generous” and “caring” Soviet government not only forced her to put her kid in their care while she worked, they also dictated what job she could do. She was a very unhappy woman.

I all but kissed the ground when we got back to the U.S. And after my mom visited Budapest in 1965, she made July 4 into a personal Holy Day of Obligation. Every year, she went to Mass to thank God for bringing her grandparents here so she could be free. 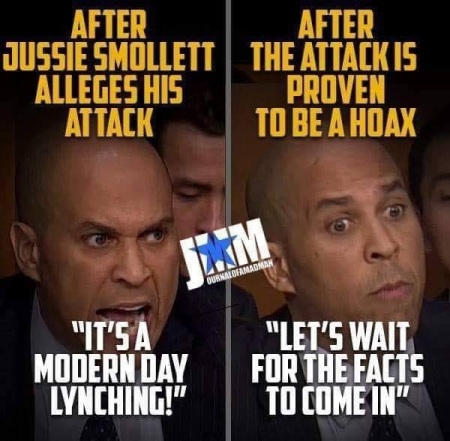 ANOTHER 2020 WANNABE: Democrats got nothing this time around.

SMOLLETT LOSES SCENES: More than half of the as-yet-unfilmed scenes that Jussie Smollett’s character was going to be in on Empire have been axed. It is not clear if his role will be entirely written out of the show. Maybe they’re waiting for the facts to come out … like everybody should’ve done before blaming Trump voters AGAIN for something that never happened.

NOT BABYLON BEE: CNN has hired a Republican to help cover 2020 – “Congratulations to former Justice Department spokeswoman Sarah Isgur Flores who was just hired by CNN as a political editor. Her background as DOJ spox and campaign manager for Carly Fiorina is not sitting well with some.” – Twitchy Team

HATE HAS CONSEQUENCES: “Brave” SJWs have been having a bad week so far.

DEMOCRATS SUE: No surprise here – 16 states, lead by California, have filed a lawsuit against President Donald Trump’s emergency declaration to fund a wall on the southern border.

Speaker Pelosi must be so thankful for this funding bill she wished those gathered tonight "Happy Thanksgiving" pic.twitter.com/mNYm65QeVI

PELOSI’S BRAIN: What has she got on everybody that she keeps her job? – On Valentine’s Day, she wished us all “a Happy Thanksgiving.”

FLOTUS: This woman has a heart – Melania Trump debuted a healing garden and intensive care unit for heart patients at the Nicklaus Children’s Hospital in Miami Monday. After the unveiling ceremony, Trump took part in a butterfly release with a young patient and then met with other patients at the hospital. The healing garden is meant to be a serene place of comfort and relaxation for children and their families.

EDUCATION CHOICE: Florida’s school choice program is so popular that the wait list has 13,000 families on it. Now Florida Gov. Ron DeSantis wants to ensure that all these families have the opportunity to enter the school of their choice. “We have parents who are lining up for a tax credit scholarship. They would not do that if the program was not succeeding,” said DeSantis.

FAIRNESS IN SPORTS: Good for her! – Former tennis star Martina Navratilova was hounded recently when she said female athletes shouldn’t have to compete against men who transition to female. But she then promised to say no more until she researched the issue. “Well, I’ve now done that and, if anything, my views have strengthened,” she wrote in the London Sunday Times.

ANTI-SEMITISM: Louis Farrakhan, who has ties with Women’s March organizers Tamika Mallory, Linda Sarsour, and Carmen Perez, spewed, “The wicked Jews want to use me to break up the women’s movement.”

ANTHONY WEINER: Former Congressman Anthony Weiner has been released from prison. He’s now at a transitional facility in New York and must register as a sex offender.