TEMPORARY FIX: Trump announced they’ve made a deal to end the shut down temporarily. House/Senate still have to actually agree on the same version of the same bill before Trump can sign it. There was some gnashing of teeth by conservatives, but I agree that he did the right thing. And Pelosi is not going to have any excuse to block the SOTU, during which Trump can say whatever he wants while she sits behind him and scowls. Pass the popcorn.

GET THIS DONE: Texas rancher Ruperto Escobar says he’s willing to give up part of the land that’s been in his family for more than 250 years in order for President Donald Trump to build a border wall.

MEDIA BIAS: Guy Benson points out that the MSM ignored the fact that 13 House Democrats defected from Pelosi’s hard line. If Republicans defected from Trump’s hard line, the talking heads would be crowing about it non-stop. Journalism today: “If it doesn’t fit the Left’s narrative, it didn’t happen.”

“I can guarantee you the headline you’ll see in the papers tomorrow. It will be some deviation of “Pelosi Shows Trump Who’s Boss,” “Trump Caved,” or “Democrats Win Big!” The Democrats are celebrating right now, and rightfully so. …

“President Trump just decided to go on offense. He took the ball back from the Democrats who were simply pushing him to use the nuclear option and designate the national emergency. This action, though not popular on it’s face, has a great opportunity to be an amazing play. President Trump is allowing the Democrats to hang themselves with their own lies. Don’t be down in the dumps this weekend over this speech. The liberal talking heads will try to discourage Trump’s base with today’s events. There is a reason they’re crowing so loud. They need you to believe them. That’s the only way they win – to dilute the Trump base. 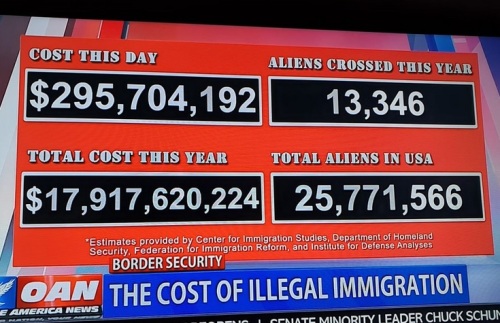 Comments Off on Wall Update