MASCOTS: While the Buzzers were here, they made HUGE progress on their fear of dogs. By the time they left, they were so eager to play with Daisey that she was begging to get locked in her crate so she could get a rest! LOL

NEWS: The Trump admin has worked a fix so that tax refunds will be issued during the shutdown, OMB head Russ Vought tells us. https://t.co/HZL6QIBEKS

WAIT, WUT? — Clearly, gaining legal status for “dreamers” is not as high a priority for Dems as hating on Trump.

TRUMP HAS AUTHORITY TO BUILD WALL: With or without Congress — “We could call a national emergency and build it very quickly.” But he would prefer to acquire funding for the wall “through a negotiated process” with congressional lawmakers.

1) The belief that physical barriers can simply be “climbed over”…just like that.

2) The belief that there’s “no real problem” on the border because 400,000 illegals apprehended on border per year is “insignificant.”

3) The belief that because you can’t put a wall everywhere (i.e. the Rio Grande), that you should, therefore, put a wall nowhere.

Stop insulting Americans just because they vote for someone you don’t like. pic.twitter.com/8wrP3ybtPe

Leftist Whoopi Goldberg on Ocasio-Cortez: "Sit still for a minute and learn the job…before you start pooping on people and what they’ve done, you got to do something" pic.twitter.com/xJT354Yu7j

TRANS REGRET: A new book called “Trans Life Survivors” by Walt Heyer tells the stories of 30 people who were convinced gender change was the answer but came to see it was not. The book also contains the latest research and an appendix with resources.

You won’t see this one covered by the MSM:

“The body of another young black man has been found at the West Hollywood apartment of Ed Buck — a prominent Democratic donor who allegedly has a fetish for drugging sex workers.” https://t.co/8e4CrLV1Sc 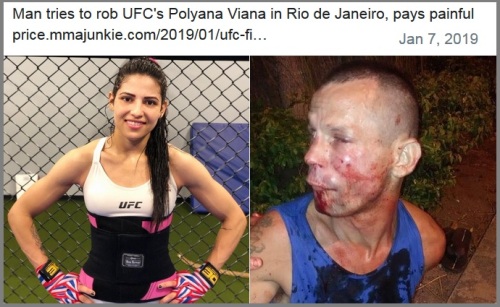 MUGGER vs. FEMALE UFC FIGHTER: He picked the way wrong woman to mess with! — This misguided criminal stepped up to a woman waiting for a cab and demanded she turn over her phone. Too bad for him that the woman in question is an Ultimate Fighting Champion fighter. She beat him so badly, he begged her to call the cops!

CATHOLICS IN CONGRESS: Nearly one-third of lawmakers in Congress identify as Catholic, including 28 of the 96 new members.