There are THIRTY turkeys in my back yard right now! THIRTY! They look young, like they’re probably all summer 2018 hatchlings who haven’t paired off yet. 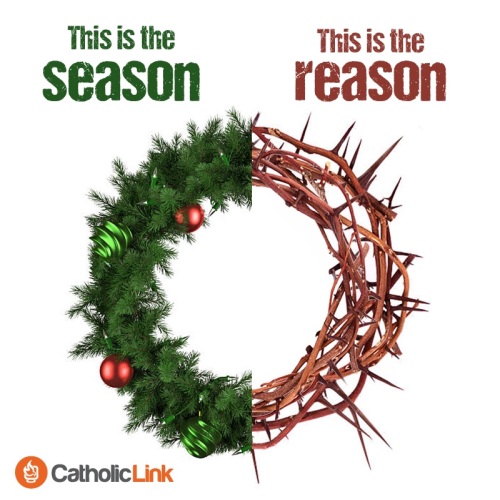 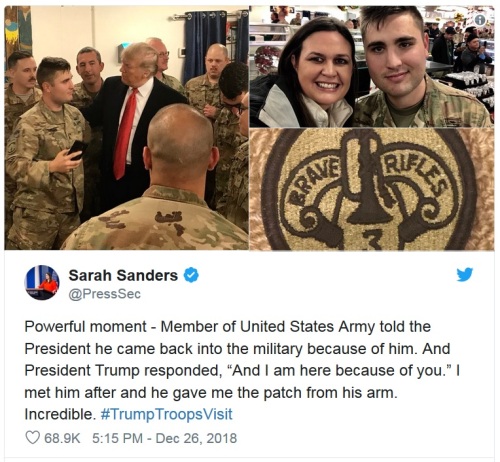 TRUMPS VISIT TROOPS: President Trump and First Lady Melania Trump made history on Wednesday as the first First Couple to travel together to a war zone to meet the troops. 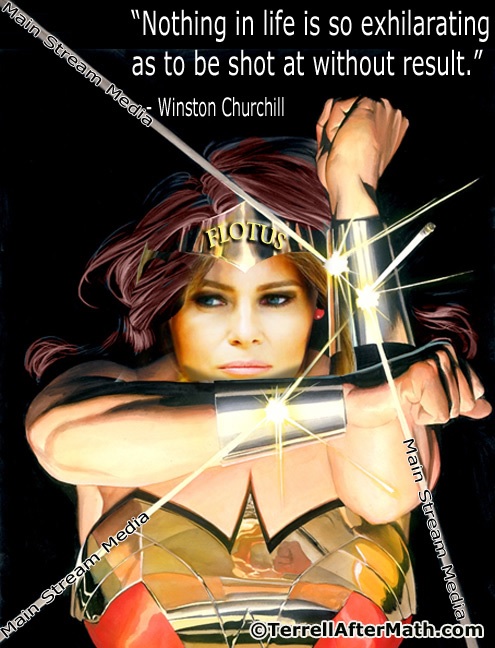 OTHER FIRSTS FOR OUR GRACIOUS FLOTUS:

THIS SHOULD BE ABOUT BORDER SECURITY: Not partisan bickering — On Saturday, Democrats rejected a White House proposal that reduced President Trump’s $5 billion demand for a border wall and offered flexibility on just how solid the wall needed to be. A recent poll shows 84% of Republicans support Trump on this vs. 87% of Democrats oppose Trump on this.

LATINO REPUBLICANS: Dems consider Latinos “their” peeps — But 32% of them voted for Republicans last November. Apparently, they’re not all thrilled with the Democrats’ shift on immigration.

ILLEGAL MURDERS CA COP: Cpl. Ronil Singh, 33, was shot during a traffic stop on Wednesday. He leaves behind a wife and 5 month old son. There is a manhunt on for the “armed and dangerous” suspect who is in our country illegally.

24,000 CHILDREN IN FIRST 3 WEEKS OF DECEMBER: Democrat policies encourage this risky, sometimes fatal behavior — Two of the 24,000 died not long after Border Patrol took them into custody, despite receiving medical care. Those two were brought illegally by their fathers. One of those fathers had allowed his child to become severely dehydrated; the other refused medical treatment for his obviously sick child. Many of the children who have arrived at the border have been unnaccompanied by an adult.

MEDIA BIAS: Just one of the most puke-making moments from 2018 — “When I hear a statement like that –  read a statement like that from Barack Obama  – who is, as we’ve said, an introspective and thoughtful and very wise man – and a brilliant writer. And he says something like ‘maybe I came along 20 years too soon,’ my reaction to that is: What do you mean? Which is to say, I cannot possibly fill in the paragraph that, that is the first sentence of, if it is spoken by Barack Obama because his mind is too supple, too complex, too rich compared to my own to fill out what the rest of that thought is.”

MOTHER JONES: Mad at Ruth — SCOTUS Justice Ruth Bader Ginsburg, who will turn 86 in March, was hospitalized twice in 2018. When she fell in November and fractured three ribs, cancerous growths were found in her lungs; they were recently removed and she has been released from the hospital. Mother Jones says, “No amount of swag or hagiography can obscure the fact that, while Ginsburg is responsible for a great number of landmark legal decisions, her legacy may be sorely tarnished by one truly terrible one: refusing to retire when President Barack Obama could have named her replacement.” Obviously, Ruth believed all the hype about how Hillary was sure to win.

Go Ahead And Try 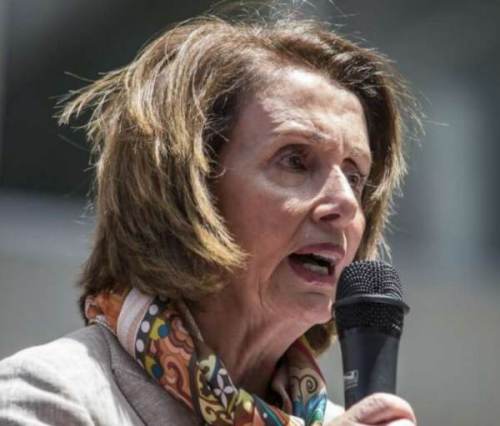 Five billion dollars. She spends more than that on her anti-seizure medicine and enough cream to keep her skin as taut as a Cherokee war drum. That’s funny right there.

House Democrats are quietly plotting ways to reopen the government while stiffing President Trump every penny on border wall funding as soon as they regain power next week.

House Speaker designate Nancy Pelosi (D-CA) and other top Dems are kicking around several options that would deny President Trump the $5 billion he is requesting to build several hundred miles of border wall, according to a new report by far-left Politico.

“We want … the government open and my hope is we can get it opened before Jan. 3,” said Rep. Jim McGovern (D-Mass.), the incoming Rules Committee chairman. “If not, one of the first things we’ll do will be to move to pass legislation to re-open the government. And the president can decide whether he wants to sign it or not.”

Howie Kurtz slams NY Times story, says it shows there’s a different standard for reporting on Trump than other presidents!

What was his first clue????

Howie Kurtz weighed in today on the front page story from the NY Times on Trump dodging the Vietnam draft – the story we told you about yesterday.

He also makes the point that this ‘investigative’ piece, which amounts to nothing but speculation, shows that there’s a completely different standard when reporting on Trump as opposed to other presidents.

Comments Off on No S**t, Howie

A Matter Of Taste…Or Gag Reflex 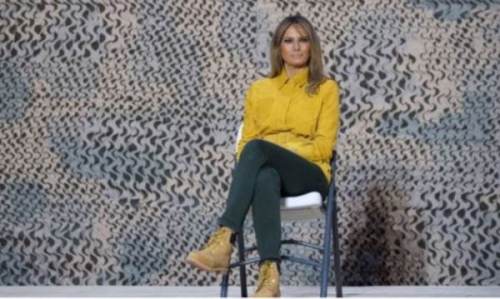 As usual, Melania Trump looked gorgeous in a mustard yellow top and dark pants. She swapped her usual high heels for ‘Timberland boots.’

The First Lady is in a combat zone so she’s trying to balance fashion and comfort, but the left just can’t help themselves — they had to mock Melania’s shoes.

The hate-filled leftists who always attacks Melania Trump for her heels and now these ‘Timberland’ boots just loved Michelle Obama’s streetwalker thigh-high glitter boots she paired with an ill-fitting dress.

This bitch has the grace of a camel and the manners of a goat. 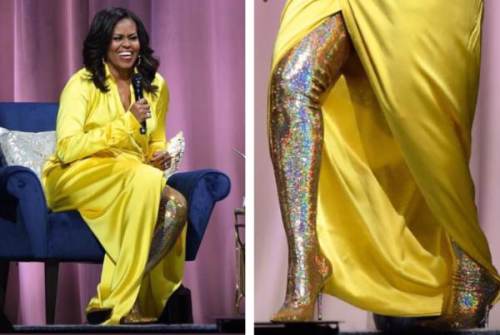 WHEN THE HORSE’S FACE MET ITS OTHER END. 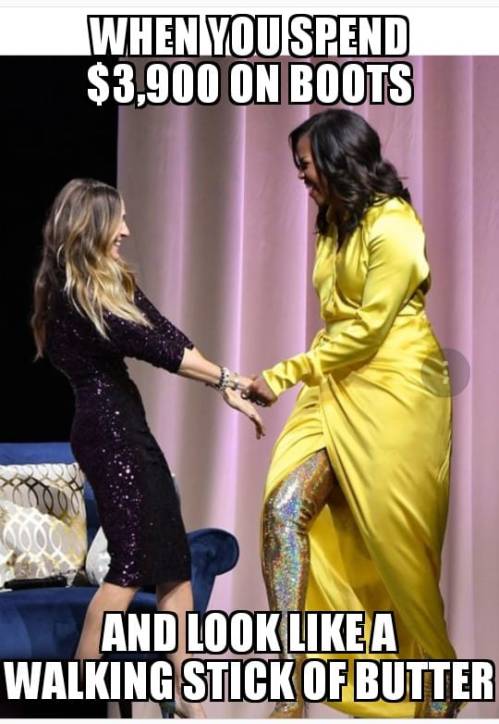 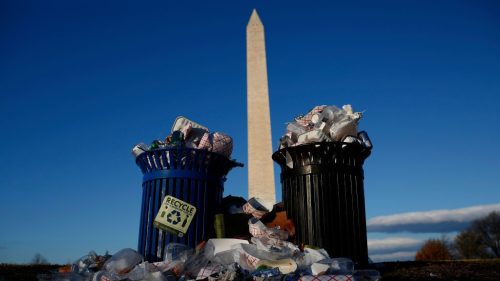 It never seems to occur to the Democrats, currently bellyaching about the largely phantom “government shutdown,” that the last people Donald Trump cares about offending are the army of Democrat-voting bureaucrats who will be the only folks inconvenienced by Senator Charles Schumer’s latest temper tantrum.

As far as the rest of America is concerned, the shutdown of “nonessential” government services can bloody well continue indefinitely, as the president has promised, in order to get funding for his wall along the Mexican border. It’s the best Christmas present ever.
Bureaucrats are happy to munch on the hands that feed them, with slovenly, indifferent “service” in useless, invented sinecures, but would never think of barking at the guys who actually throw them the bones, and thus keep them ensconced in petty power over their fellow citizens.

Comments Off on Sweet Shutdown, Roll On

Barbara Boxer: Pelosi Will Act Like a Grown Up, Reopen the Government 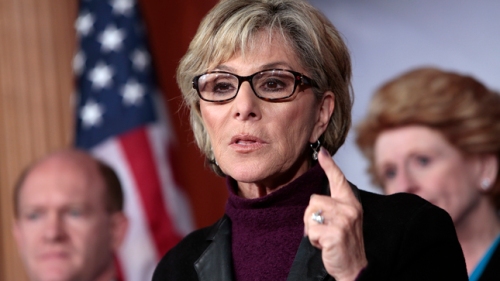 Sen. Barbara Boxer (D-Calif.) speaks during a press conference on Thursday, March 21, 2013 about the differences in the F.Y. 2014 budgets being offered by the House Republican and Senate Democrats.

“And when Nancy Pelosi gets in there and the Democrats act like grown ups, and I’ll tell you, Mitch is going to be in a spot. Let them pass it, let them send the reopening of the government, it could be short term, to the president and let them override his veto if he’s still listening to President Rush Limbaugh. Oh, I mean, radio talk show Rush Limbaugh.”

Jon Voight: ‘Slanders and Lies’ ‘Trying to Hurt Our President’ 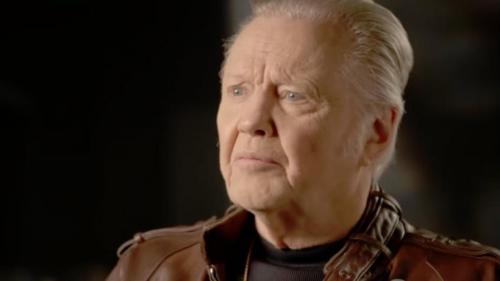 Needing to get something off his chest, Voight looked into the camera and told his audience that although he’s “happy all the time… there are things that bother me. Most especially what bothers me is people trying to hurt our president of the United States.”

Voight dove into a short speech on the “slanders and lies” of the mainstream media and left-wing politicians who are trying to distract from the president’s successes. Voight claimed, “He’s doing a good job everyday. He’s doing amazing things really, and the news is not representing it, and there are people who are trying to cook up slanders and lies to bring him down.”

He also told host Mark Levin that the left’s “virulence” towards Trump is due to the fact that “he’s effective.”

Comments Off on ‘Slanders and Lies’

The Inevitability of Impeachment

The New York Slimes gives you five free articles to look at for free. I have three left. Anybody want them? I won’t be reading this crap anymore. 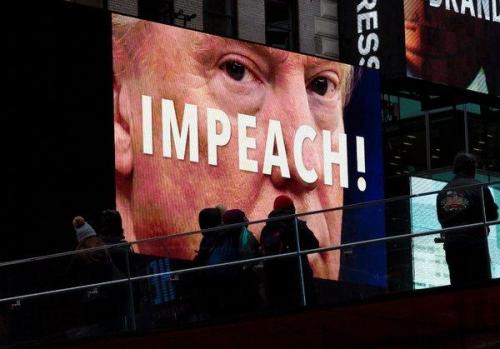 An impeachment process against President Trump now seems inescapable. Unless the president resigns, the pressure by the public on the Democratic leaders to begin an impeachment process next year will only increase. Too many people think in terms of stasis: How things are is how they will remain. They don’t take into account that opinion moves with events.

Whether or not there’s already enough evidence to impeach Mr. Trump — I think there is — we will learn what the special counsel, Robert Mueller, has found, even if his investigation is cut short

The word “impeachment” has been thrown around with abandon. The frivolous impeachment of President Bill Clinton helped to define it as a form of political revenge. But it is far more important and serious than that: It has a critical role in the functioning of our democracy. 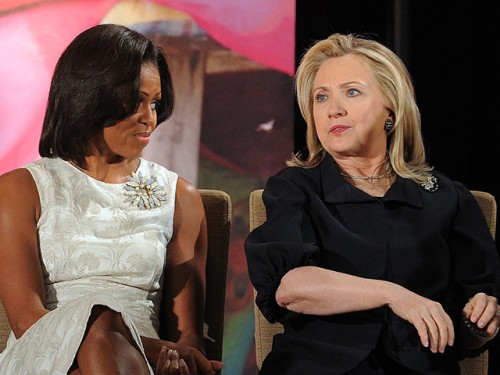 Americans’ admiration for Clinton crashed so hard this year that she did not even finish second place after Mrs. Obama, instead tying with First Lady Melania Trump, whom the establishment media has relentlessly attacked.

Obama has been named “most admired” in the poll a total of 11 years now, nearly tying former President Dwight Eisenhower who was named Most Admired Man for 12 years in a row.

I posted this very image on Facebook a few days before Christmas. The text was: “Jesus, YOU’RE the reason for the season.” 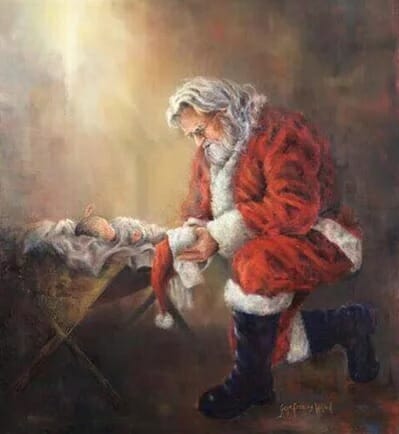 Facebook censored an image of Santa kneeling before our Lord in a manger posted by LifeSite News this year.

“We err on the side of allowing content, even when some find it objectionable,” declares Facebook’s community standards, saying it does so in order to maintain a “safe environment” for its “Facebook community.”