He Fights This Battle Alone

Trump to McConnell: Use the nuclear option!

To sum up, we’ve gone from needing Democrat votes for the wall to McConnell being told to kill the filibuster and push it through that way.

Not to be nitpicky, but if McConnell doesn’t use the nuclear option, does it mean he now bears responsibility for the government shutdown? After all, the country is counting on him.

In any event, looks like there’s a lot of pressure on Republicans in the Senate to get this done.

I wouldn’t count on the republicans doing anything except covering their asses. 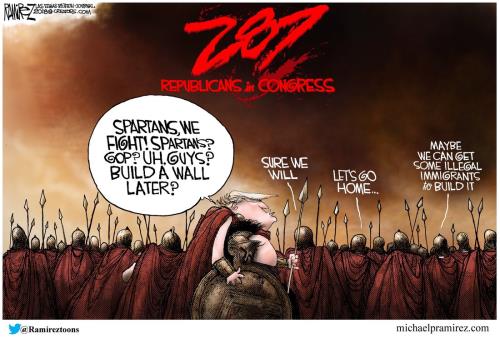 “This morning, several Senators put out statements confirming their opposition (to the nuclear option), and confirming that there is not a majority in the conference to go down that road,” David Popp, McConnell’s Comms Director said.

Comments Off on He Fights This Battle Alone

From the Babylon Bee:  Every Single Bump Stock In Nation Suddenly Lost In Boating Accident

In a rash of tragedies all across the United States, every single bump stock in the nation was tragically lost in various boating accidents earlier this week.

“Well, I guess our job is done,” an ATF representative said. “We were gonna have to make sure people complied with this unilateral executive order, but now I guess we can just harrass gun owners for other stuff. Worked out pretty nicely for all of us, I think.”

Comments Off on Tragic!

To silence the criticism that there weren’t enough Democratic primary debates, the party has decided to host at least 12 debates starting in 2019. The Washington Post reported that polling and grassroots support would be the gauge concerning who will earn a spot on stage. Six debates will be held next year in states that aren’t holding early primary contests.

So, grab your popcorn, whiskey, and maybe an Advil or seven because the amount of candidates running in 2020 is going to be astronomical. And thus, the level of insanity is sure to reach biblical levels. The circus is coming to town.

I predict the central theme that will dominate these debacles is how to GET TRUMP! KILL HIM! MAIM HIM! HURT HIS KIDS!  I make that statement with a reasonable amount of metaphysical certitude.

Comments Off on Here We Go

Pelosi: Wall Funding Is a ‘Non-Starter’

It is not my intention to spend the next few years reading about the rants of this deranged hag.

“There seem to be some discussions ongoing on the floor of the House right now among Republicans around trying to pass the short-term funding bill. They’re discussing adding wall funding, there’s also potentially adding disaster funding—is there any situation you think Democrats could support beyond a clean continuing resolution?” Hunt asked.

I’ll get to it right away. Tell Trump: No wall. No shutdown. Stop the tantrum and keep the government open through the holidays.

I want to be 100% clear about this: Trump is about to close down the government because we won’t let him waste billions of taxpayer dollars on an immoral and ineffective wall.

If Trump doesn’t get money for “steel slats or a wall,” hundreds of thousands of federal workers will be thrown into financial uncertainty — right in time for the holidays.

During this busy travel season, TSA agents and air traffic controllers will work without pay. Federal workers won’t know when they’ll get their next paycheck — or when they can pay off their credit card bills, filled with holiday travel expenses and gift purchases.

Let him know you’re against his wall and his impending shutdown. Add your name >>

We can’t and will not let up,

Comments Off on Pelosi: Wall Funding Is a ‘Non-Starter’

Neither Rain Nor Snow

… nor heat, nor having cancerous nodules removed from her lung will keep this fossilized socialist from putting her personal opinion ahead of the security of the country. 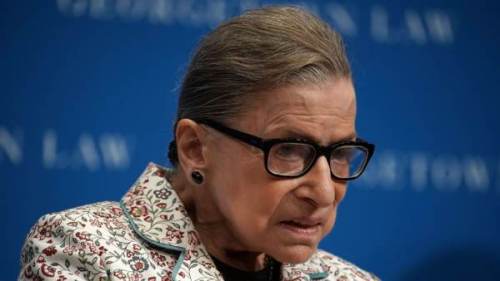 In what seems like a case of potential elder abuse, Supreme Court Justice Ruth Bader Ginsburg cast the deciding vote against President Donald Trump’s asylum restrictions from her hospital bed, where she just underwent surgery for lung cancer.

Instead of allowing the 85-year-old justice to rest on the day she had cancerous growths removed from her lung at the Memorial Sloan Kettering Cancer Center in New York, she was put to work in the hospital room.

THIS IS WHAT DEMOCRATS DO:

In 2009,the late and unlamented Klansman, Robert C. Byrd,was brought from a hospital bed for a vote. Nothing ever stops them from shafting the US taxpayer.

Despite Fragile Health, Byrd Is Present for Votes

In what has become a poignant ritual during a fractious debate, Senator Robert C. Byrd, the 92-year-old Democrat from West Virginia, was pushed onto the Senate floor in his plaid wheelchair Wednesday afternoon. It was his third appearance of the week, each prompted by a vital vote.

Senate Democrats need every one of their 60 votes to prevail in the donnybrook over a health care overhaul, and this week faced a series of cloture votes — required to end debate on the bill — to move the legislation ahead. That placed no small burden on the frail nonagenarian, who spent six weeks in the hospital last spring with a staph infection, and who did not deliver his customary Christmas address on the Senate floor this year.

Chief Justice Roberts is the new Swing Vote, or worse

Chief Justice Roberts has been sensitive to political criticism of the Supreme Court.

It was widely reported in 2012 that Roberts succumbed to a public pressure campaign from Obama and Democrats that the Court would lose its legitimacy if it overturned Obamacare. Roberts reportedly changed his vote to uphold the Obamacare mandate as a tax, to the fury of the four conservative Justices who wrote a dissent that sounded like it had once been the majority opinion.

Roberts also saw fit to make a public pronouncement after Trump criticized a San Francisco federal judge for a decision enjoining Trump’s new policy on processing asylum claims, which held that people who illegally crossed the border could not apply for asylum. After Trump referred to the Judge as an Obama Judge, Roberts issued this statement to AP:

“We do not have Obama judges or Trump judges, Bush judges or Clinton judges,” Chief Justice Roberts told the Associated Press.

“What we have is an extraordinary group of dedicated judges doing their level best to do equal right to those appearing before them.”

The decision leaves in place lower-court rulings that blocked the administration from automatically denying asylum to people who do not go through official border crossings. An open-ended nationwide injunction on enforcement issued by a San Francisco-based federal judge this week prompted the Justice Department to seek immediate relief from the Supreme Court.