TISSUE ALERT: Seriously … watch the whole thing. With a tissue.

CHRISTIANS WIN: Obama-era HHS mandate violates the Religious Freedom Restoration Act — Bush-appointed Judge Philip Brimmer of the U.S. District Court for the District of Colorado found in favor of six Christian organizations that objected to being forced to include contraception coverage in their employees’ health plans.

Democrats are shrieking about Michael Cohen telling federal investigators that Donald Trump spent $200,000 of his own money — before he was President — to shut up two women who threatened to go public with claims that he had had sex with them.
Tucker Carlson called their hysteria “insultingly stupid.” Really … what they’re saying is that anyone who is running for office should have to disclose and declare all private spending as campaign expenses. Would that include toothpaste?
Or how about the 700 million dollars of taxpayers’ money Congress critters gave themselves to pay off all the men and women who have brought sexual abuse charges against them? That’s a WHOLE lot more than Trump paid and it wasn’t their own money either.

KARMA: Stormy is a piece of work — First she extorted $130,000 in hush money out of Donald Trump, then she violated the NDA she’d voluntarily signed to get her hands on the dough. Then, she sued Trump for defamation because he said something meany pants about her character. But hey, what goes around, comes around. The court threw the defamation suit out, because … you know … the First Amendment. And now Ms. Slut Face has been ordered to pay The Donald $293,052.33 to cover his costs in dealing with the frivolous suit. Lemme see … 293,000 – 130,000 = methinks she should’ve kept her mouth shut.

Who knew TROMBONES could be so fun?! Today’s Bits & Bytes got long, so I though y’all could use a funny break in the middle.

ASTONISHINGLY STUPID: Wait, I’m not talking about AOC! — Nate Silver (founder and editor-in-chief of FiveThirtyEight and a Special Correspondent for ABC New) tweeted this gem: “There are lots of reasons Ocasio-Cortez drives certain Republicans crazy, foremost among them her race and gender. But it’s also that she’s quintessentially a New Yorker and DC political culture is formal and prudish when NYC mostly isn’t those things.”

Uhhhhhhhhh no. We can’t stop talking about her because she’s an ignoramus that the Democrats and their lapdog media treat like the Second Coming. We’re not afraid of her. And we certainly don’t give a toot about her race or gender. As for the New Yorker thing … uhhhhhh, project much, anti-Trumpers?

FACEBOOK: A far cry from Zuckerberg’s preferred image — The British parliamentary committee leading an inquiry into Facebook released a trove of documents it seized last month as evidence in a lawsuit brought against the company. Internal communications from high-ranking employees at the company, including CEO Mark Zuckerberg and COO Sheryl Sandberg, point to a company whose priorities are more about self-preservation, revenue generation, and fear of being exposed for dubious privacy practices than the benevolent, touchy-feely, global-community image Facebook has pushed over the years. E.g., emails discuss ways to secretly harvest user data from phones and to snuff out a start up competitor.

ABORTION: Democrats and their lapdogs in the media talk like we’re all in favor of legal abortion, but the fact is that a majority of Americans favor strict limitations on abortion and are largely clueless about just how unrestricted our abortion laws really are.

YALE UNIVERSITY: Skip the whole “a woman and her doctor” thing — Students at Yale University’s Silliman College will soon be able to obtain condoms, lubricant, and Plan B morning-after pills via a so-called “wellness to-go” vending machine that will be installed in the campus’s Good Life Center before winter break.

GENESIS: Science again — A group of archeologists and other scientists say they have discovered strong evidence that the region of the “Middle Ghor,” where the cities of Sodom and Gomorrah are believed to have existed, were in fact destroyed by a meteor that exploded in the sky above, raining down superheated matter and raising temperatures to thousands of degrees, a theory that matches the account of the cities’ destruction contained in the Old Testament Book of Genesis.

CHINA OPPRESSES CHRISTIANS: Google offers to help — On Sunday night, Chinese authorities launched coordinated raids against Early Rain Covenant Church in Chengdu, the provincial capital of Sichuan. About 100 Christians from the Protestant church, which is not sponsored by the Chinese government, were taken into custody. As the raid took place, church members’ personal social media accounts and cell phone group discussions were blocked around 9 p.m., and the church’s telephone line was cut. Google has agreed to work with the Chinese government to create a censored search platform, sparking protests from within the company. This raid sends a chilling warning as to exactly what the Chinese government would do with the help Google has offered.

CHINA CAVES TO TRUMP: China moved to reduce tariffs on US cars from 40% to 15% in the latest sign of their willingness to negotiate a trade deal with President Trump.

LITTLE CARACAS ON THE PRAIRIE: Fracking in North Dakota and Socialism is Venezuela has combined to shrink the oil output of the nation with arguably the world’s largest crude reserves behind the state with the Guinness World Record for the most snow angels. In September, North Dakota produced nearly 1.3 million barrels while Venezuela only managed 1.17 million barrels.

JOBS: In October 2018, there were 1 million more jobs than unemployed workers in the most recent government count of job openings. And no, Obama, you did NOT build that.

NEW YORK LAWMAKERS: Why do these people get to vote on their own pay? — New York’s governor and state lawmakers are set to become the highest paid in the nation under a new plan that would boost their salaries by 64%, from the current $79,500 to $130,000. Yeah, that’ll really help stem the tide of jobs OUT of New York State.

RACISM IS COOL: If you’re the one benefiting — South African lawmakers passed a proposal to change the country’s constitution to make land grabs legal. Then they voted to take land from white farmers without compensating them for it. This same plan turned South Africa’s neighbor Zimbabwe from a state of plenty to a starving state.

BEFORE THE MEETING: President Trump tweet stormed about the wall — “Despite the large Caravans that WERE forming and heading to our Country, people have not been able to get through our newly built Walls, makeshift Walls & Fences, or Border Patrol Officers & Military. They are now staying in Mexico or going back to their original countries……. Ice, Border Patrol and our Military have done a FANTASTIC job of securing our Southern Border. A Great Wall would be, however, a far easier & less expensive solution. We have already built large new sections & fully renovated others, making them like new. The Democrats,….. however, for strictly political reasons and because they have been pulled so far left, do NOT want Border Security. They want Open Borders for anyone to come in. This brings large scale crime and disease. Our Southern Border is now Secure and will remain that way……. I look forward to my meeting with Chuck Schumer & Nancy Pelosi. In 2006, Democrats voted for a Wall, and they were right to do so. Today, they no longer want Border Security. They will fight it at all cost, and Nancy must get votes for Speaker. But the Wall will get built… People do not yet realize how much of the Wall, including really effective renovation, has already been built. If the Democrats do not give us the votes to secure our Country, the Military will build the remaining sections of the Wall. They know how important it is!”

There’s a lot of talk on the web today about the meeting between Trump/Pence and Schumer/Pelosi. Schumer and Pelosi talking about how awful the idea of a government shut down is makes my blood pressure shoot up. Remember Obama? Remember how he fenced off open air memorials and Michelle let her famous garden rot?

PREVIOUS GOVERNMENT SHUTDOWNS: Non-essential government services have been suspended for more than a single day only twice in our history. Both times, it was because a Democrat president refused to sign the spending bill that the Republican-controlled Congress had passed. Clinton’s lasted 27 days in 1995-96; Obama’s lasted 16 days in 2013. 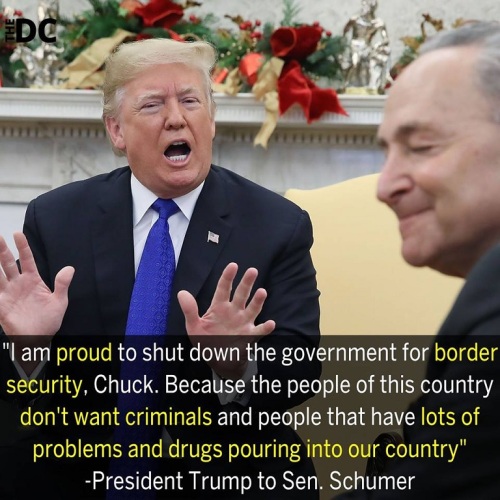 BORDER SECURITY: Rep Tom Reed on CNN — “Americans want Congress to get the job done and keep our country safe. It is time for Democrats and Republicans to come together to find common ground in order to secure our border.” The anchor keeps harping on the increase in the deficit, as if the border wall is the ONLY thing that is driving spending. How about how much we’re spending on an ever-increasing number of illegals who think they have some right to free health care, free education, free housing, and free food? She also totally ignores Tom’s points about the necessity for border security (which a majority of Americans want) and about how wrong it is for Democrats to politicize that issue.

DEMOCRATS: Why exactly are Democrats SO obsessed with genitalia? — Nancy Pelosi reportedly told colleagues that Trump’s border wall is “like a manhood thing for him. As if manhood could ever be associated with him.” I mean, Hillary says she didn’t get elected because people fear vaginas of power and now Nancy Pelosi says Trump only wants the border wall because his weenie is inadequate? Oh, and she also likened the Oval Office meeting to getting peed on by a skunk. Freud would have a field day.

Allegedly, she was “trying to be the mom.” Well, that sounds about right, so long as we remember that her definition of “a mom” is someone who has the absolute right to dismember her unborn children at any gestational age, for any reason, and at taxpayers’ expense.