There’s One Born Every Minute

Social status: more valuable than gold to them.

In a new advertising campaign, Payless attempts to make a statement about the quality of its craftsmanship by trying to convince the would-be online socialites that $19.99 pumps and $39.99 boots are worth far more — and it worked.

Guests reportedly raved about the shoes. One called them “elegant, sophisticated.” Another claimed she “could tell [the product] was made out of high-quality material.”

Within a few hours, “Palessi” had sold thousands of dollars in footwear. One guest offered a whopping $640 for a pair.

The National Action Network agreed to pay the activist preacher $531,000 for his “life story rights for a 10-year period,” according to the non-profit’s latest tax filing, which was obtained by The Post.

NAN can apparently turn around and sell those rights to Hollywood or other takers at a profit, but neither the reverend nor the charity would identify what producers are waiting for such Sharpton content.

How The Democrats Stole California

What Is ‘Ballot Harvesting,’ And How Did California Dems Use It To Nuke The GOP?

As the polls closed on election day last month, six California Republican House candidates, including Representatives Dana Rohrabacher, Steve Knight, and Mimi Walters, were ahead in their respective races. However, as the absentee and provisional ballots rolled in over the intervening weeks, all six lost to their Democratic opponents.

Passed as a barely noticed change in the state’s vote by mail procedures in 2016 and signed by then-Governor Jerry Brown, California’s AB 1921 allows voters to give any third party — not just a relative or someone living in the same household, as was previously the law — to collect and turn in anyone else’s completed ballot.

Called “ballot harvesting,” critics say the practice is ripe for fraud. Consider “Lulu,” who was recorded trying to “harvest” what she thought was a Democratic voter’s ballot in Rep. Knight’s district.

It’s a “new service,” said Lulu, for “like, people who are supporting the Democratic party.”

The San Francisco Chronicle reported that 250,000 such ballots were used in Orange County alone, resulting in a Democratic sweep there.

Comments Off on How The Democrats Stole California

In perhaps a move to make one or both of those assignments happen, Ocasio-Cortez recently fell in line with other Democrats who say they will vote for House Minority Leader Nancy Pelosi (D-CA) for Speaker when the party takes the majority in that chamber in January.

“Joining the Financial Services panel would give Ocasio-Cortez greater power to pursue key aspects of her platform, such as expanding access to affordable housing,” the Hill reported.

Rep. Maxine Waters (D-CA), an anti-Trump zealot who has repeatedly called for President Donald Trump to be impeached, will likely lead the Financial Services Committee.

I never believed for a second that election-thief Brenda Snipes would resign and go quietly. Only republicans do that. Arrogant, abusive, defiant, all are characteristics of democrats, especially black ones. Governor Scott should check her bank account to see if there are any recent deposits in large amounts. 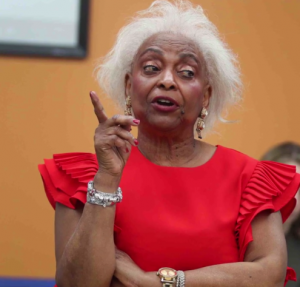 Gov. Rick Scott late Friday suspended embattled Broward County Supervisor of Elections Brenda Snipes even though Snipes had already agreed to step down from her post in early January. Scott replaced Snipes with his former general counsel even though Peter Antonacci has no elections experience.

Snipes responded by rescinding her previous resignation — and will now be “fighting this to the very end,” her attorney said during a Saturday news conference.

“We believe these actions are malicious,” said Burnadette Norris-Weeks, who said that Broward County voters should be concerned about what Scott is trying to do in the Democratic stronghold by putting in an ally who could oversee the office into the 2020 elections.

Voting For Their Own Extermination

Bi-Partisanship: When republicans abandon any principles they have to crawl into the mud and let democrats, even in the minority, have everything they want.

Republicans are joining democrats in pushing to have the question of whether or not you are a citizen removed from the U.S. census. States like California with millions of illegals will get additional congressional seats and ultimately cost the GOP dearly.

Center for Security Policy CEO Frank Gaffney said if Republicans aid Democrats in blocking the American citizenship question on the 2020 Census, this is the “serial GOP acquiescence to Democrats’ demands – especially those that contribute to the fundamental transformation of America” that can be expected in the upcoming Congress.

“Unfortunately, the radical left has already made great strides in making-over American society by alienating its young people from our country, symbols, values, and history,” Gaffney continued.

RUH-ROH: We thought we might see a backgammon. They’re very rare, but this was a good start on one!

WOW: Must See Video — This moment from the senior reining finals at the American Quarter Horse Association World Show is amazing. If only we all listened and obeyed Our Lord the way Ms. Dreamy listens and obeys her rider, Dan Huss.

RIP BUSH 41: “The inspiring life of former President George Herbert Walker Bush, who died Friday at the age of 94, helped ignite the thousand points of light he saw as illuminating American greatness, hope and opportunity, said President Trump. “Through his essential authenticity, disarming wit, and unwavering commitment to faith, family, and country, President Bush inspired generations of his fellow Americans to public service.” The former president joined his wife, Barbara, who died in April at the age of 92. They were married for 73 years.

MEDIA: AP shows its anti-American colors — I’m going to skip all the other nasties the Left poured out on a recently deceased president. Let’s just say that they and their lapdog journos totally deserve our contempt.

INGRAHAM: A first lady double standard? — The Ingraham piece is from last year. This year, The Washington Post devoted an entire article to criticizing Melania’s Christmas decorations and Vice said it was a “Christmas from Hell.”

TOM ARNOLD: Math is not his thing. My fave response to his absurd tweet: “Assuming you’re right, the campaign against gun rights can stand down and let things run their course. In no time at all, the few that survive will voluntarily disarm.”

LIBERALS: People who create problems to make themselves feel miserable. — According to HuffPo, “Rudolph the Red-Nosed Reindeer” is “seriously problematic.” The video above quotes “woke” tweeters bitching about racism, homophobia, and a serious need for diversity training. ALL of them kinda sorta TOTALLY MISS THE POINT, which is that all those bad behaviors get shown up at the end when Rudolph saves Christmas. Sheesh. 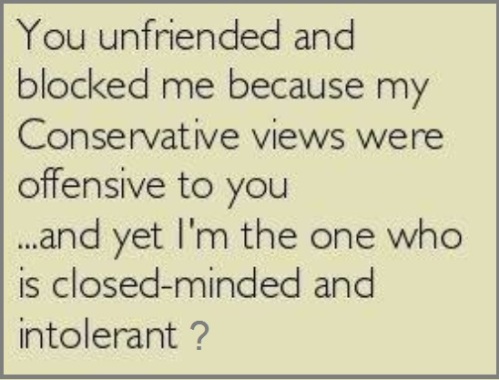 LIBERAL LOGIC: “No human being is illegal. Let them all in.” and “A fetus needs permission to reside in a uterus.”

Oh Claire. We led with this topic. You deceptively chose the last minute of the show where we do fun stuff. Loser! https://t.co/AVe3QzNaET 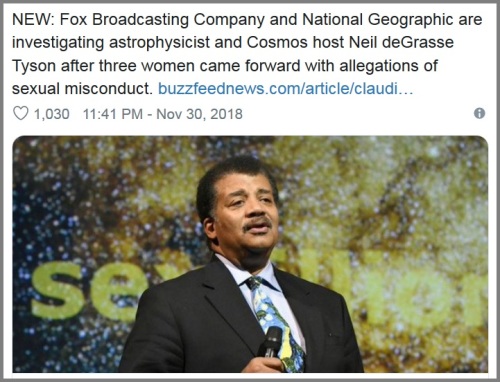 #METOO: Believe the women? One of the women says, “I feel like most people don’t believe he’s a predator because of his status as an educator.” According to Tyson’s comments about the allegations, due process is cool again. I’m sure everyone who slandered Brett Kavanaugh is now going to say sorry. 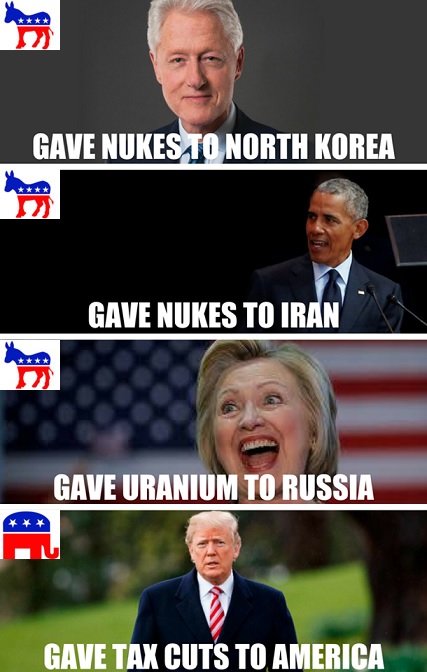 YES, I AM PROUD TO BE A REPUBLICAN! 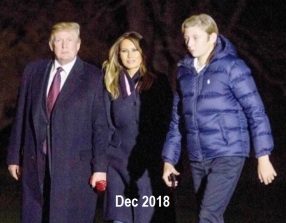 BARRON TRUMP: He has shot up over the past two years. They say he’s 6’3″ now!

JUST A GAMMON: As soon as Dearest cleared off his six point, I threw three sixes in a row, so it was just a gammon. Some day, I’d like to see a backgammon. They’re so rare; I don’t even care who wins, just to see it happen would be fun enough for me.

IMMIGRATION: Mayor of Tijuana is NOT happy — Tijuana Mayor Juan Manuel Gastelum called for the arrest of the organizers of the Central American illegal migrant caravans. It’s not surprising that Gastelum is growing impatient with the caravan. There is an estimated over 6,000 migrants settled in his city, and they are beginning to cause problems. “We’ve have never, never, never, never had this problem,” Gastelum said. “Some of these people are coming in violently, disrespectfully, not as a good, law-abiding citizen. And that’s what’s hurt us.” Gastelum said the migrants are also significantly hurting Tijuana economically.

Tons of trash and clothes left behind by #caravan #migrants at the #TijuanaBorder shelter this morning. #Mexico police moved most of them about 15 miles away from the border yesterday to a different camp @FoxNews pic.twitter.com/bU6tEyEeo0

ILLEGALS IN TIJUANA: Tons of trash — Little wonder the mayor is fed up. 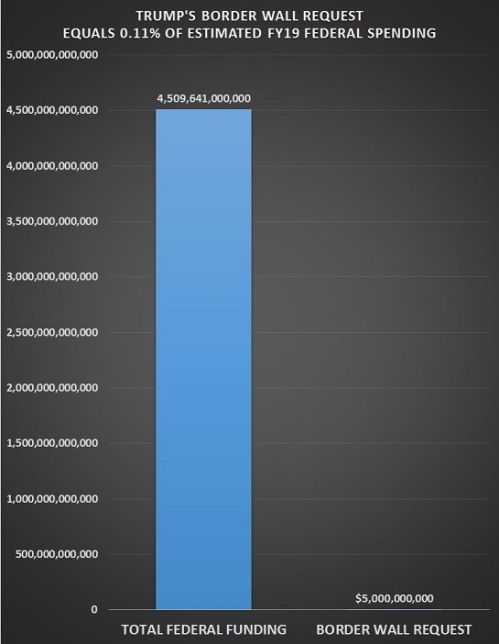 BUILD THE WALL: President Donald Trump’s $5 billion request for funds to use building a wall along the U.S.-Mexico border equals 0.11% of the estimated $4.5 trillion the federal government is expected to spend this fiscal year. The funding for food stamps in October alone cost more than the president’s entire FY 2019 request for the border wall.

IMMIGRATION: Using kids to game the system — Homeland Security Department reported a 110% increase in the number of men showing up at the border with children, noting they can be used not just by families, but also by by smugglers and drug traffickers to enter the country. Families are also using fraud to game the immigration system. The department said that 170 families have been caught lying about their relationships to enter the U.S.

KEEP THEM OUT: DHS Sec Nielsen sent an internal memo to the leaders of the departments of State, Labor, Energy, Transportation, Interior or Justice asking them to send law enforcement officers to the border to help keep caravan riders from entering the U.S. Should they do it, the move would be unprecedented. But then, so is the assault on our border. If law enforcement does head to the border, active duty troops will be pulled from their mission sooner, DHS officials said.

Comments Off on Border Crisis